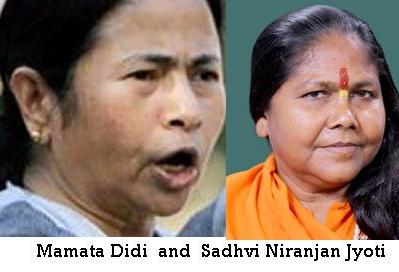 Curtains may appear to have come down on Sadhvi Niranjan Jyoti’s tryst with the words ‘Haramzadon’ (illegitimate children) and ‘Ramzadon’ (God’s children) after her unconditional apology in Parliament but it does not mean we have heard the last word on the politics of cuss words.

We, in India, particularly in the two states of Telangana and residuary Andhra Pradesh, are familiar with cuss words which are spoken loudly in public places, mostly during street corner fights. Recourse to profanities is also a routine norm during friendly banter among some sections in the two states.  We have grown up with these words in a manner of speaking, though, by tradition, we keep the tongue under check while at home and in the presence of elders.  In fact, uttering cuss words inside homes, especially by the youngsters when their elders are around, is generally a strict ‘no, no’. Well, it is duplicity in practice but that is a reality of our society.

In the West, particularly in the El Dorado and its Big Apple, which have become the second home for our tech savvy in search of what celebrated economist John Kenneth  Galbraith once dubbed as an American nirvana, not every profanity is a taboo. Yes, at home or the work place.   The ‘F’ word has wide acceptance in the entertainment industry of Hollywood and also in the print and the electronic media alike.

Yet, oddly enough, Western politicians appear to stay clear of indecent vocabulary in public.  Not that they are not prone to tongue slips since in their day-to-day life they too are used to speaking taboo words.  Such occasions see them slip into damage control with a sheepish grin.

What saves the day for these worthies is the fact that the Western society is not easily outraged by the use of certain cuss words as we in India are.  This trait may be because the recourse to a profanity is not seen as malicious in intent, aimed at a community or class.  Of course, at times an offensive remark can lead to protests but it does not happen as a rule.

Frankly, not everything that the Western societies accept becomes kosher in a society like India’s, where everyday life is governed by dictates of ‘morality’ and ‘culture’ defined differently by various people for public consumption.  At least this is the message from L’affaire Sadhvi Niranjan Jyoti.

When she used the word ‘Haramzadon’ and spoke about ‘Ramzadon’ at a street corner pre-election rally organised by the BJP in Delhi, she was clearly deprecating a minority community. Such a remark was bound to invite trouble since   religious sentiments are frequently aroused particularly during election time. And Delhi is in election mode with the assembly dissolved and stage set for a two-leg race between Moditva of BJP and Desertertva of Aam Admi Kejriwal with Sonia-Rahul Congress in also ran category, as of now.

The Sadhvi’s problem was compounded by the fact that she is Minister of State for Food Processing Industries in the Narendra Modi government. She is by all means new to national politics and the opposition found in her their Bofors gun to fire at the Modi sarkar, which is in an overdrive to deprive the Sonia –Rahul Congress of its icons and the Trinamool Congress of its talking points.

Of course, the BJP was quite embarrassed by the politics of cusswords, and it did not hide its discomfort. In no uncertain terms, the party conveyed the impression that its top brass did not approve of such words spoken by a minster; all good enough signals that the matter should head to an early closure. But it did not because the Congress, CPM and Trinamool Congress did not want to let go of their first opportunity in seven months to make the government squirm with discomfort in full public view.

Parliamentary Affairs Minister Venkaiah Naidu still managed to buy peace in the Lok Sabha but the ruling party managers messed up the issue in the Upper House. Advice to the beleaguered minister to express “Dil se Khed’ (heartfelt regret) but not seek ‘Mafi’ (apology) only complicated matters further.   However, once it realised the enormity of the issue, the BJP leadership, unlike its Congress-led UPA predecessor, displayed quick reflexes to prevent the storm from becoming a typhoon to derail Modi plans for the winter session of Parliament.

Prime Minister Narendra Modi ticked off the Sadhvi to the glee of the Opposition benches in the Rajya Sabha.  In the same breath he defended her saying “She is a new minister”, and underlined her rural moorings. His defence seemed to imply that women in villages lack the intelligence to understand the difference between a good and a bad word and therefore speak loosely. Luckily for the treasury benches, this Modi slip did not attract the attention of the Opposition, which was pre-occupied with symbolism and thus missed the woods for the trees.  The government managed to get away with some bruises in the process but missed the opportunity for a counter attack offered by mercurial Mamata “Didi”.

Close on the heels of the “Haramzadon- Ramzadon” episode, the West Bengal chief minister threatened her rivals with a bamboo that would be pushed down their backside. Such an expression is not generally heard in the ‘bhadralok’ society she belongs to. And it was certainly a more crude expression than the ‘Haramzadon’ word.  Moreover, the objectionable word spoken by the Modi Minister has a less vulgar tone to it than the phrase uttered by Mamata Bannerjee, who is a poet and painter, and is, therefore, urbane in her demeanor unlike the Sadhvi.

The Jyoti – Mamata episodes bring us face –to- face with the penchant of Indian   leaders, particularly those in positions of responsibility to speak like “country bumpkin”.  Hitherto such a tribe of ruffians is known to be confined to Bihar political landscape.   So the new trend is cause for worry. It shows falling standards in our public discourse and leaves no room for optimism about some sophistication amongst the present day Indian political class.