By Jean Shaou
The Conservative-Liberal Democrat coalition, the Labour opposition and media commentators are all agreed that public expenditure has become unaffordable, unsustainable and a drain on the economy. As the Guardian put it, “There is no serious dispute about the need to bring the deficit down, only about the best timetable”.

The claim is that the public sector is profligate and inefficient. Public sector workers are overly protected with high wages and “gold-plated” pensions. So public spending must be cut back in the interest of everyone.

Yet no one offers any evidence proving that public services are responsible for Britain’s high level of debt, because there is none. Consider first the trend over the last 40 years or so.

Public expenditure averaged 42 percent of GDP between 1967 and 2010. In general, it varied with the business cycle, rising in recessions and declining in the economic upswings, as the tax yield increased and welfare payments declined relative to GDP.

When the global financial and economic crisis of the early 1970s took its toll on the British economy, the Labour government sought a bailout from the International Monetary Fund in 1976, and implemented a series of cuts even more savage than those of the subsequent Thatcher governments in the early 1980s.

Despite Thatcher’s ideological offensive against “big government”, the privatisations, efficiency drives and determined efforts to slash welfare spending, public expenditure was still running at 42 percent of GDP when New Labour returned to power in 1997.

What then happened under Labour?

For the first few years, New Labour stuck rigidly to the previous Conservative government’s spending plans, bringing public expenditure relative to GDP to 37 percent in 2000-01, its lowest point for 50 years and far lower than under Thatcher. Gordon Brown, the chancellor of the exchequer, only allowed expenditure to rise in absolute terms after 1999 and surpass the Conservatives’ spend, relative to GDP, in 2005.

The largest increases were in health and education, which accounted for 61 percent of the total increase. While spending on pensions and welfare rose in absolute terms under Labour, it fell in relative terms from 36 to 33 percent in 2008, due largely to the growing economy. It rose thereafter to 35 percent due to the recession and measures to cut welfare entitlement and increase the number in work. In 2009, this resulted in nearly 378,000 coming off benefits.

But significantly, despite the increases, public expenditure as a proportion of GDP at 40 percent was still well below the average 42 percent of the previous 50 years. Even more importantly, while public indebtedness did rise, this too, at 36 percent of GDP in 2008, was no greater than normal.

Who benefited from the increased spending is revealing.

Public sector workers are paid less than private sector workers, despite many being qualified health and education professionals, and the pay gap widened from about £2,000 in 1999 to £3,600 in 2008. In part at least, this gap reflects the fact that women constitute 65 percent of the public sector workforce and many work part-time.

The total wage bill rose from 24 to 27 percent of government expenditure, despite the larger workforce and higher wages. So the 42 percent increase in public expenditure was not eaten up by the workforce.

So where did the money go? It went to private business.

In the name of efficiency, the Labour government continued and extended the Conservatives’ policy of outsourcing public services, including almost all local government functions. A report commissioned by the Department for Business Enterprise and Regulatory Reform found that by 2007-08, of the £300 billion spent on services (as opposed to welfare payments, interest and investment), £159 billion was spent on pay and £141 billion on procurement. Just 53 percent was spent in-house. Of the £141 billion spent on procurement, £79 billion went to the new and burgeoning “public services industry”.

Labour got the Private Finance Initiative (PFI) up and running, whereby the private sector was brought in to finance, build and operate key hospitals, schools, prisons, roads and the justice system, at vastly inflated cost. More than a third, when measured by capital value, have now failed.

Labour increased public subsidies to the loss making privatised railways and partially privatised London Underground. It squandered billions on management consultants every year to devise the reforms and push them through, reaching £2.8 billion in 2005-06.

These measures, together with the expansion in public spending after 2000, were disguised handouts to the corporate and financial sector and created a para-statal workforce, variously estimated to number between 1.2 million and 1.7 million, employed by private companies that have become de facto public authorities.

According to the Financial Times, the private provision of public services, as reflected in the UK public services industry, rose from about £42 billion in 1995-96 to £80 billion in 2007-08 in current prices. Only in Sweden and Australia was a higher proportion of GDP achieved.

Taken together, this means that much of the increase in public expenditure between 2001 and 2008 was eaten up, not by public service workers, but by the additional costs of outsourcing, administering internal and quasi-markets, the PFI, rail subsidies to the private railways that would not otherwise be able to pay dividends to their shareholders, etc.

So when and why did public expenditure and debt balloon?

Public expenditure relative to GDP in fact only exceeded that of the early 1990s after the bank bailouts and the onset of the recession in 2008-09.

The bailout in 2007-08 of two failed mortgage lenders, Northern Rock and Bradford & Bingley, added at least £127 billion to the public sector’s liabilities, a sum equal to 8.6 percent of GDP in 2007-08, increasing total public sector net debt to GDP to about 48 percent. These two bailouts alone were worth more than the £110 billion spent on health care, by far the largest spending area, for 2008-9.

In the autumn of 2008, the government stepped in with a raft of financial and economic measures to shore up the banks and the financial sector and prevent an economic collapse. Because of these subventions, public debt rose rapidly, from £525 billion in 2008 to £772 billion in 2012. It is set to rise to £1.2 trillion by 2012, a sum equal to 68 percent of GDP, and to keep rising, as is the cost of debt servicing.

Note: 1977 was one of the highest level of indebtedness in the post-war period and is now dwarfed [Source: Public Expenditure Statistical Analyses 2010, Office for National Statistics] 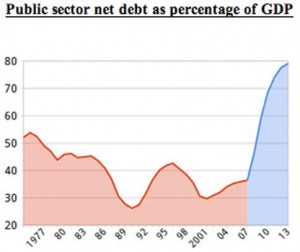 As the chart shows very graphically, this rising debt/GDP ratio is the product of the bank bailouts. This is what is unsustainable, not the cost of public services. It is what the working class is being forced to pay for by the Conservative/Liberal Democrat government and Labour-controlled councils acting on behalf of their corporate paymasters. (wsws.org)