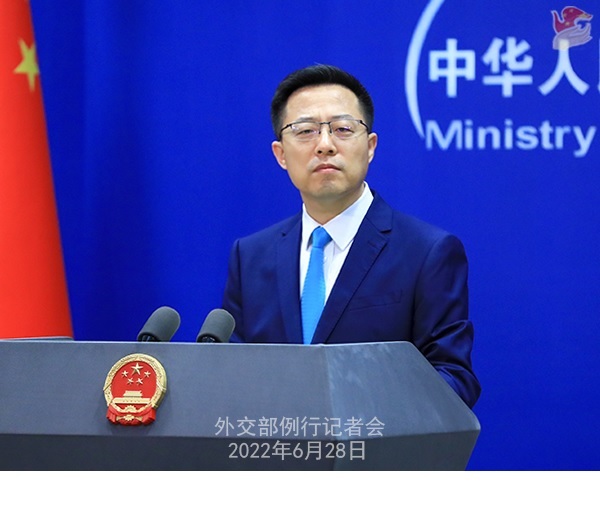 CCTV: Could you share the arrangements for Vice President Wang Qishan’s trip to the Philippines and China’s expectation for the trip?

Reuters: According to reports, China wants its own security company to guard its citizens and assets in Pakistan following recent attacks against its interest. Can the foreign ministry confirm if the Chinese Ministry of State Security asked Pakistan in June to allow a Chinese security company to operate in Pakistan? Pakistan’s Interior Ministry has objected to this request, saying instead that Pakistan security forces are able to protect Chinese nationals and assets in Pakistan. Can you comment about this?

Zhao Lijian: I am not aware of what you mentioned. Between the responsible departments of China and Pakistan and between the Pakistani government and the Chinese embassy and consulates, there is close communication and coordination on protecting Chinese institutions and personnel in Pakistan. We have noticed that the Pakistani government has set up a special security division tasked with protecting Chinese personnel working on the China-Pakistan Economic Corridor and inter-governmental cooperation projects. It also offers protection to other Chinese personnel in the country.

People’s Daily: China proposed establishing the Global Development and South-South Cooperation Fund and the global development promotion center at the High-level Dialogue on Global Development last week. Could you share more information on them, including how China plans to flesh out these two new concepts?

Zhao Lijian:  …..The global development promotion center will mainly act as a platform for actions and mobilize resources for implementing the GDI. The Chinese side will develop a project pool covering key GDI areas and hold a Forum on Global Action for Shared Development to provide insights for GDI cooperation.

These concrete steps are an important part of China’s practical plan? to substantiate the GDI. We believe that by pooling consensus on development worldwide and mobilizing global resources for development, they will surely contribute to implementing the 2030 Agenda for Sustainable Development and promoting global development.

Global Times: It is reported in recent days, two batches of earthquake relief supplies donated by the Chinese government arrived in Afghanistan on civil and military aircraft. Chinese Ambassador to Afghanistan Wang Yu and Ghulam Ghaws Naseri, acting minister of state for disaster management and humanitarian affairs of Afghan interim government, attended the handover ceremony. Can you share more details on this?

Right after the earthquake, the Chinese government decided to provide 50 million yuan worth of emergency humanitarian assistance to Afghanistan. Two batches of urgently-needed supplies such as tents, camp beds and sleep blankets have arrived in Afghanistan. Chinese Ambassador to Afghanistan Wang Yu and Mr. Ghulam Ghaws Naseri, acting minister of state for disaster management and humanitarian affairs of Afghan interim government, attended the handover ceremony. The Afghan side thanked China for the assistance and said they will deliver the relief supplies into the hands of the people in earthquake-stricken areas to provide concrete help to those in need.?

China will continue to follow the situation on the ground and post-disaster reconstruction in Afghanistan. We are ready to offer more urgently-needed help to the country in light of its need. We believe the Afghan side will pull through in solidarity and rebuild from the disaster soon.?

Associated Press of Pakistan: Last week, Pakistan received a RMB15 billion loan from China, which will help Pakistan build up its foreign exchange reserve. Do you have any comment on that?

Zhao Lijian: China and Pakistan are all-weather strategic cooperative partners. China always supports Pakistan in developing the economy, improving people’s livelihood and maintaining financial stability. We stand ready to continue to work with Pakistan to follow through on the consensus between the leaders of both countries, deepen practical cooperation in financial and other fields, jointly address risks and challenges and build a closer China-Pakistan community with a shared future in a new era.?

TASS: According to the Russian foreign ministry, Iran and Argentina have submitted applications for their membership in the BRICS. I wonder if you have any comments on that?

Zhao Lijian:  ….We noticed that many countries including Iran and Argentina have favourably expressed their will to join BRICS. As the BRICS chair for this year, China actively supports BRICS in starting the membership expansion process and expanding the “BRICS Plus” cooperation. At the 14th BRICS Summit on June 23, BRICS leaders have spoken in one voice about BRICS expansion and expressed support for the discussion on the standards and procedures of the expansion. China will work with BRICS partners to steadily advance the expansion process so that more partners will join the BRICS family.

Bloomberg: NATO is set to label China a “systemic challenge” when it outlines its new strategy concept this week, while also highlighting Beijing’s deepening partnership with Russia. How does the foreign ministry respond to this?

Zhao Lijian: …. How could China be labelled a “systemic challenge”? China has promoted the building of a community with a shared future for mankind, advanced high-quality Belt and Road cooperation, put forward the Global Development Initiative and the Global Security Initiative, and provided a large number of public goods for the international community to address major issues such as peace and development. China’s development presents an opportunity for the world, not a challenge for anyone. We solemnly urge NATO to immediately stop spreading false and provocative statements against China. What NATO should do is to give up the Cold War mentality, zero-sum game mindset and the practice of making enemies, and stop seeking to disrupt Asia and the whole world after it has disrupted Europe.

Shenzhen TV: The Hudson Institute established a “China Center” in May this year, with former US secretary of state Mike Pompeo as the chair of the Center’s advisory board. What is your comment?

Zhao Lijian: The Hudson Institute is a conservative think tank in the US. In recent years, it has provided a platform for US politicians including then Vice President Mike Pence and Secretary of State Mike Pompeo to speak against China. The institute also received long-term funding from the Taiwan authorities and assisted the latter to spread “Taiwan independence” rhetoric.

Academic institutions should be bridges of communication and mutual learning between countries, rather than build deep trenches or high walls. They should become bridges of understanding and cooperation, rather than a source of disinformation about China. I believe you will stay vigilant to the real purpose and the potential moves of the China Center, and will not pull chestnut from fire for certain anti-China elements.

Zhao Lijian: On your first question, China-Pacific Island Countries (PICs) relations enjoy sound development. We have maintained close exchanges and cooperation between government departments, legislatures, political parties, civil groups and local governments. As for the specific event you mentioned, I would refer you to the competent authorities.

On your second question, China attaches great importance to its relations with the Pacific Islands Forum (PIF). Since China became a Dialogue Partner of the PIF, China has actively participated in PIF’s annual dialogue activities and has never been absent. We fully respect PICs’ decision against holding a dialogue this year and will stay in close communication with the PIF on follow-up arrangements.

AFP: Foreign Minister Wang Yi will reportedly visit Myanmar in July for the 7th Lancang-Mekong Cooperation Foreign Ministers’ Meeting. Can you confirm whether it’s true or not?

Zhao Lijian: We will release relevant information in due course. Please stay tuned.?

Beijing Daily: Japan’s Supreme Court has recently ruled that the government was not liable for the accident at the Fukushima Daiichi nuclear power plant. The ruling covers four separate damages lawsuits filed by residents affected by the nuclear meltdown. To date, about 12,000 people affected by the accident have filed around 30 class action lawsuits demanding compensation from the Japanese government and the Tokyo Electric Power Company. It has been pointed out that the latest ruling “could affect the outcomes of similar lawsuits filed across the country”. What’s China’s comment?

Zhao Lijian: I have noted relevant reports. What happened at Japan’s Fukushima Daiichi nuclear power plant is one of the worst nuclear accidents in history around the world. Large amounts of radioactive substances were leaked, which has a far-reaching impact on the marine environment, food safety and human health. For the Japanese government, the responsible thing to do is to properly handle the aftermath such as offering compensations, decommissioning the damaged reactors and disposing of the nuclear-contaminated water.

I would like to stress that on the matter of disposing of the nuclear-contaminated water, the Japanese government’s decision not only bears on the Japanese people’s basic human rights such as the right to health, but also concerns the rights and interests of people in all countries around the Pacific. Lately, the Japanese side, in disregard of the opposition at home and abroad, has expedited construction of facilities for discharging the nuclear-contaminated water into the sea and may soon secure approval for the ocean discharge plan, which can turn this bad plan into a fait accompli. China once again urges the Japanese side to take the legitimate concerns of various sides seriously, look for an appropriate means to dispose of the nuclear-contaminated water through full consultation with stakeholders including neighboring countries and relevant international organizations, and stop pushing through its ocean discharge plan.

Bloomberg: Australian Prime Minister Anthony Albanese said on his way to the NATO Summit that the Chinese government should learn the lessons from Russia’s “strategic failure” in Ukraine. In an apparent reference to any attempt to seize Taiwan by force, Albanese said that the war “had shown attempts to impose change by force on a sovereign country meet resistance”. How does the foreign ministry view Mr. Albanese’s remarks?

Zhao Lijian: We have elaborated on China’s position on the Ukraine crisis on multiple occasions. We have also stressed many times that Taiwan is not Ukraine. A parallel cannot be drawn between them. Taiwan is not a sovereign country. We hope relevant politicians will stop making irresponsible remarks.

MASTV: The US and Taiwan held the inaugural meeting of the US-Taiwan Initiative on 21st-Century Trade recently. The two sides discussed the development of a roadmap for negotiations with a view to reaching agreements with high-standard commitments and economically meaningful outcomes. Do you have any comment?

Zhao Lijian: China firmly opposes all forms of official interaction between the Taiwan region and countries having diplomatic ties with China, including negotiating or concluding agreements with implications of sovereignty and of official nature.?