The Chinese foreign ministry spokesperson Wang Wenbin held a presser on May 17. The questions fielded ranged from BRICS high level meeting on Climate change to Covid pandemic in North Korea, and from the IMF SDR review to issues related to Fukushima Daiichi nuclear power plant  and recent firing by a Taiwanese American.  ? 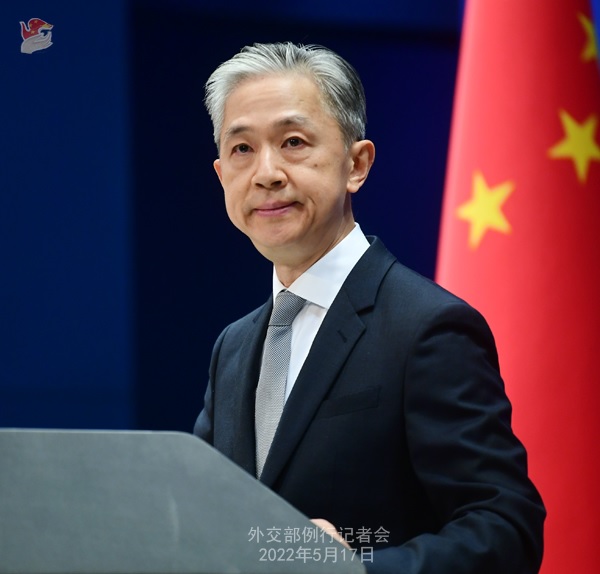 CCTV: The BRICS High-level Meeting on Climate Change was held via video link a few days ago. Could you give us more details?

Wang Wenbin: The BRICS High-level Meeting on Climate Change was held via video link a few days ago. The meeting was hosted by the Ministry of Ecology and Environment of China and attended by officials of the environmental departments of BRICS countries. BRICS countries had in-depth exchanges and reached broad consensus on accelerating low-carbon and climate resilient transition, advancing the multilateral process on climate change and strengthening solidarity and cooperation in addressing climate change.

BRICS countries, as an important force in addressing climate change, have contributed their share to global climate response. At the 75th session of the UNGA, President Xi Jinping solemnly pledged that China will strive to peak carbon dioxide emissions before 2030 and achieve carbon neutrality before 2060. China formulates and implements a “1+N” policy framework for carbon peak and carbon neutrality and has over-fulfilled the climate action goals of 2020. Brazil, Russia, India and South Africa have also made their climate pledges respectively, formulated climate policy and announced corresponding measures.

BRICS countries have collaborated with each other in responding to climate challenges. We have conducted policy information sharing, and engaged in dialogue and exchanges on specific policies, measures and actions adopted to implement respective climate goals. We will continue to carry out information exchanges and cooperation at the national, local, industrial and enterprise levels, in multiple fields including clean energy, low-carbon technology, sustainable and resilient infrastructure construction, carbon market and climate change adaptation, and jointly promote policy research on low-carbon green growth, technology cooperation and joint pilot projects. With science and technology innovation being the driver, we will promote the transition and upgrading of energy, resources, industrial structure and consumption structure, jointly exploring pathways for low-carbon and sustainable development.

BRICS countries have made their voice heard for improving the global climate governance system. This BRICS High-level Meeting on Climate Change reviewed and adopted a Joint Statement, which reiterates the commitments to the goals, principles and institutional framework of the United Nations Framework Convention on Climate Change and its Paris Agreement; opposes the politicization of climate change issues and all forms of unilateralism and protectionism; calls for all Parties to focus on implementation actions by faithfully translating their climate goals and visions into measures and actions; underlines that developed countries should take the lead in scaling up mitigation actions and ambition and provision of climate financing, and respect the right to development and policy space of developing countries as well as countries in transition; calls for developed countries to scale up the support for developing countries to adapt to climate change, enhance their resilience to climate change and come forward with a detailed and explicit roadmap on how the commitment made at COP26 to at least double climate finance for adaptation to developing countries from 2019 levels by 2025 will be realized, as soon as possible.

BRICS countries, which together represent around 42 percent of the world population and one fifth of the global GDP, have become a model for cooperation between emerging markets and developing countries. We are fully confident that BRICS will remain a stabilizer for the regional and international landscape and a booster for solidarity and cooperation of emerging markets and developing countries. China stands ready to work with its fellow members to assume BRICS’ responsibility for, and offer its solution and contribution to global climate cooperation.

CCTV: The IMF completed its quinquennial Special Drawing Right (SDR) valuation review a few days ago and increased the weight of the Chinese renminbi to 12.28 percent from 10.92 percent. This is the first valuation review since the Chinese currency was included in the SDR basket in 2016. Do you have any comment on this?

Wang Wenbin: The Executive Board of the International Monetary Fund (IMF) completed its quinquennial SDR valuation review a few days ago. The current composition was maintained with a higher weight for the Chinese renminbi. This is a high recognition from the international community of China’s achievement in reform, opening-up and socioeconomic development. It will help to further enhance the Chinese renminbi’s status as an international reserve currency and increase the appeal of renminbi assets.

Going forward, China will unswervingly continue to deepen the reform and opening-up of its financial market, further streamline the procedures for foreign investors to invest in the Chinese market, enlarge the universe of investable assets, improve data disclosure and business environment, extend the trading hours of the interbank foreign exchange market, continuously level up the convenience of investment, and create a more enabling investment environment for foreign investors and international institutions.

AFP: US investigators said on Monday that a man who padlocked a church and opened fire on his Taiwanese American congregation was motivated by political hatred, and he was upset about the political tensions between the Chinese mainland and Taiwan. Does the foreign ministry have any comment?

Wang Wenbin: We have noted the report you mentioned. Reports also said that this man emigrated from China’s Taiwan to the US. We hope the US government will take earnest and effective measures to solve the worsening gun violence problem at home.

Bloomberg: The US plans to increase the penalties for companies violating rules that limit the exports of products that could be used to threaten national security in an effort focused on nations such as Russia and China. Potential changes include bigger fines for companies that break the rules. Does the foreign ministry have a comment on this?

Wang Wenbin: I’m not aware of the situation you mentioned. To give you a principled response, I’d like to stress that the US has repeatedly stretched the concept of national security and abused state power to hobble specific countries and businesses. China?is?opposed?to?that.?Such behaviors violate the market economy principles and international trade rules and undermine global industrial and supply chain security. They will harm others as well as the US itself.

AFP: The US government warned on Monday that North Koreans were hiding their identities to try and get jobs in the technology sector, saying that workers posed as nationals of countries including China and Japan. Does the foreign ministry have any comments on this?

Wang Wenbin: I’m not aware of the specific situation you mentioned.

Beijing Daily: According to reports, the Tokyo Electric Power Company (TEPCO) has recently begun undersea excavation near the shore one kilometer from the Fukushima Daiichi nuclear power plant in preparation for the construction of an undersea tunnel outlet to dump the nuclear-contaminated water. Does China have any comment?

Wang Wenbin: I have noted the report with deep concern. Pacific-rim countries, China included, have voiced grave concern over and firm opposition to Japan’s erroneous decision of discharging the contaminated water from the Fukushima nuclear accident into the ocean. About 180,000 people from Fukushima and other regions in Japan have signed a petition demanding that the Japanese government replace the ocean discharge plan with alternatives. However, TEPCO, turning a deaf ear to international concern and walking back on its earlier commitment of no ocean discharge without public understanding, persistently pushed forward construction works for the discharge. Such attempts at creating a fait accompli are irresponsible. The Japanese government should step in and stop it.

So far, the Japanese government has been unable to offer a thorough and convincing explanation on issues ranging from the legitimacy of the ocean discharge option to the reliability of relevant data, the efficacy of the treatment system and the uncertainty of environmental impact. This is a plain fact the Japanese side cannot sidestep. Again, we urge Japan to take seriously the legitimate and reasonable concerns of the international community and the Japanese people, revoke its wrong decision of dumping the nuclear-contaminated water into the sea, stop pushing forward preparation for the ocean discharge, and earnestly fulfill its due international obligations.