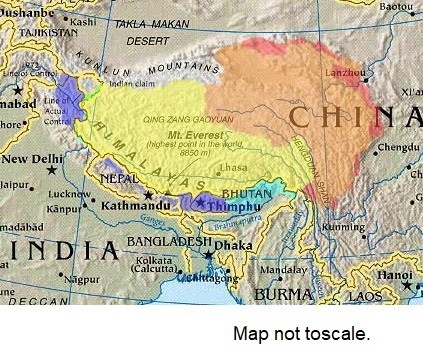 A multi-year collaborative historical research shows that Tibet has never been a part of China and that the pre-1949 official records clearly debunk the Chinese claim to Tibet from ancient times.

The findings of the project were presented at the US Congressional-Executive Commission on China.

“China’s pre-1949 official historical records clearly show that, before the PRC invaded Tibet in 1950, Tibet was never part of China. Sadly, today many governments incorrectly believe this ridiculous lie, and this is part of the reason why many western democracies fail to provide adequate support for upholding Tibet’s sovereignty,” said Hon-Shiang Lau, Retired Chair Professor, City University of Hong Kong, in his testimony before the Commission, a Beijing News Net report says.

The professor also presented maps from the Ming and Qing dynasties to back his contention.

Elaborating, Prof Lau said there is an abundance of authentic and reliable pre-1949 Chinese official historical records. “The PRC-version of Chinese history is very different from the version of “Chinese history” reflected in these pre-1949 official Chinese records”.

Another witness, Michael van Walt van Praag, Professor of International Law and Executive Chairman of Kreddha, shared his view accusing the international community, including the US, of falling in line with China’s historical narrative that Tibet has always been part of China.

“Contrary to what the People’s Republic of China claims and to what many people take for granted, Tibet was historically not a part of China. This is one of the outcomes of a multiyear collaborative historical research project that I recently completed and published”, Prof Praag said.

“The PRC bases its entitlement to Tibet solely on its assertion that Tibet has been an integral part of China since antiquity. Whether or not Tibet was historically a part of China, therefore, determines whether the PRC has the legitimacy to rule Tibet or not. And that, in turn, informs the international community’s obligations and responsibilities regarding the Sino-Tibetan conflict,” he added saying that the international community is wrong in believing that the Sino-Tibetan conflict is an internal affair

Tenzin Tethong, who is Dalai Lama’s representative to North America, told the Commission about the challenges faced by the Tibetan Central Administration and the Dalai Lama in maintaining contact with the Chinese government.

“More than 70 years after the invasion, Tibet remains a high priority, for the Chinese Communist Party. This priority is evident in the attention and resources the Party devotes to surveillance, repression, and control, to General Secretary Xi Jinping’s goal of Sinicizing religion, the exploitation of natural resources, and building up military forces along Tibet’s border with India,” said Ellen Bork, who is Contributing Editor with American Purpose.