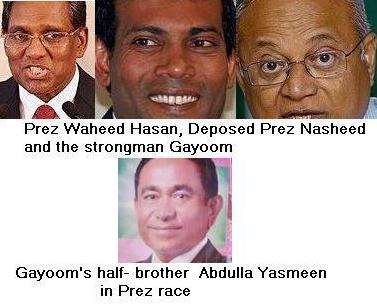 If all goes well and if there are no Gayoom induced hiccups, Maldives will make its third tryst with its presidential election on Saturday Nov 9. There is a question mark still on how the visible and not so visible forces react to the outcome. The possibility of rejecting the verdict does not belong to the realm of Ripley’s Believe it or not with the orchestrated campaign of Gayoom and his coterie at home and his patrons in Beijing and Islamabad- Rawalpindi to push Mohamed Nasheed the winner of the first round off the front line two months ago.

Hopes of no return to bizarre events rests solely on the international pressure and the public mood and this is not a misplaced hope is clear from the fact that Gayoom’s Progressive Party of Maldives (PPM) has endorsed the voter’s list though grudgingly. Putting a melodramatic spin, PPM which hopes to see Gayoom’s half brother Abdulla Yameen Gayoom at the Presidential Palace, attributed its decision, besides pressure from international partners, to the need to ease mounting public concern over the vote and to save the county from further financial losses.

Nasheed’s Maldivian Democratic Party (MDP) was the first party to accept the new voters’ lists though it is aware that the rolls were prepared with an eye to deny whatever advantages it may have at the ballot box. Jumhoory Party (JP) and its candidate Gasim Ibrahim have also signed the voters’ lists as required under the Maldivian law to set the country on its third vote in the presidential election, which under the statute should be completed before November 11.

India which is seen having a direct stake in an orderly transition in Male, Britain and the United States, which share India’s geo-strategic perception of the Indian Ocean region, have been calling for a credible election.. The three countries in their own way have communicated the message that a failure to hold the ballot not only in a fair manner but also enabling free exercise of the franchise would damage Maldives international reputation which depends on tourism and fish for its survival.

What happened on Nov 6 at London’s Excel Convention centre where more than fifty Maldivian companies were in attendance to promote their nation of multiple islands as an idyllic holiday destination offered the taste of things in store if the lslamist zealots in Male only enacted the script given to them by their overseas friends.

To go by Daily Telegraph’s report, the event’s official Twitter hashtag was inundated with photos of the victims of alleged police brutality and tweets claiming democracy has been destroyed in the country. So instead of promoting Male bound tourism that accounts for about a third of the country’s GDP, these companies found themselves facing loaded political questions and groped for answers both short and long. For some twitter users the hashtag came in handy to call for a tourist boycott of Maldives till the country makes a course correction while some others told their visitors that the first democratically elected President Nasheed was overthrown at the behest of resort owners.

To his acute embarrassment, Gasim Ibrahim has ended up as the butt of most twitter message. It is not because he is Maldives richest businessman with several luxury holiday resorts but because of the fact he has played into Gayoom politics of somehow make Nasheed disappear from the presidential sweepstakes.

Towards that lofty goal, Ibrahim knocked at the Supreme Court, and got the first round annulled with President Mohamed Waheed Hassan’s police telling the bench that several under aged persons had cast their vote and that names of some dead also find a place in the electoral rolls. In short the police claim was that there was an inbuilt mechanism to facilitate bogus voting and therefore the September 7 first round verdict that went in favour of Nasheed should be declared null and void.

Elections Commission (EC) Chair Fuwad Thowfeek has since punctured the Police claim and showed it to be a version of Ripley’s Believe it not enterprise. At least four of the eighteen voters deemed to be dead in the Supreme Court verdict were in fact alive, the poll body found out. A house wife protested to the Chief Justice that she cannot be called a widow when her 48-year-old husband is very much alive and lives with her at their Male home. The apex court got her husband’s name deleted from the voter’s list on the basis of police report. Now the lady wants a roll back of the order.

All this only showed to what extent the anti-democratic forces are prepared to go in furtherance of an international agenda aimed at ushering in a Caliphate and of making Male the transit point of Bamboo capitalism’s odyssey into the so called Dark Continent.

To return from the digression, the poll body had earlier planned the run off on November 16. It has since advanced the date to Nov 11 with the concurrence of Nasheed, Yameen Gayoom and Gasim Ibrahim. The outgoing president Mohamed Waheed Hassan, who offers an absorbing study on politics of rank opportunism, could have been an aspirant for the new vote. But he has seen the writing on the wall at the end of stymied first round itself and has bowed out of the race. And he did not stand in the way of a rejig of the run off calendar.

Had PPM and JP signed the voter list last month itself, Maldives could have seen regime change by now since the EC had set the re-vote for Oct 19 initially. Also of course, had the police played along but they had refused to co-operate with the poll body.

From all accounts, Nasheed is the front runner this time too. And he is locked in a close contest with Gayoom’s half brother Abdulla Yameen Gayoom though the presence of business tycoon, Qasim Ibrahim makes it a three-leg race involving an estimated 239,105 voters just a few hundred short of the 239,593 registered voters at the time of first round in September.

Will the electorate reward the front runner with the mandatory 50 per cent vote to ward off a runoff on Nov 10?

The answer rests on three factors: The Gayoom and his Islamist friends who have entered the fray on a religious card, Police, and Judiciary though not necessarily in that order, and above all the extent of fairness in the voting process. PPP has been linking Islam and sovereignty. Abdulla Yameen has been telling voters that it is “obligatory” upon them “to vote for him for the sake of Islam and the nation”, and also because PPM was the only party that worked on behalf of the religion and the nation during the three-year long MDP government.

His anti-corruption pitch is no less interesting. “I could have awarded projects any way I wanted to become the richest man during the Gayoom regime, he told an election rally, adding that by the grace of God, “I am free from corruption and is able to talk about the corruption of another person in front of the people”. The dig is at MDP Nasheed; and the cases slapped against him.

The run up to the ballot has seen an atmosphere of fear with cadres and colleagues of MDP leadership coming under threats and intimidation. For instance, the 29-year –old wife and the four-year-old daughter of MDP lawmaker Hussain Waheed were stabbed in their Male apartment on Nov 5 night. A media house known to be pro-Nasheed was subjected to arson a few days back. There have been demonstrations by Islamic fundamentalists. All this points to the upper hand the hardliners appear to be gaining particularly in the remote islands.

A resolution of the impasse on the political stage is a must to put Maldives firmly on the path of democracy. And also to rescue the country from the dire straits it has been pushed into according to a report presented to Parliament early November. The political uncertainties have hit hard the tourism industry. From a robust 15.8 per cent growth in 2010, tourist trade has plunged to negative 0.1 percent now. Other sectors are in no pink of health either. While the salary bill is an estimated US $ 32 million a month, the income is just $ 19 million forcing the government to borrow from the central bank of the country.

The message is clear. The new ballot is very crucial for Maldives both politically and economically.