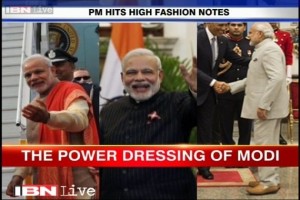 A weird reason advanced for the licking his party received in the Delhi Assembly polls was said to be the expensive, reportedly worth Rs 10 lakh, suit that prime minister, Narendra Modi, wore briefly during a meeting with the US president, Barack Obama, when he was in Delhi during the Republic Day celebrations. Critics said that the suit with his name in pin stripes sullied his image in the eyes of the ‘common man’ who did not expect a former ‘chaiwallah’—a reference to his humble origin—to be such a showoff in the selection of his clothes.

That Narendra Modi likes to dress colourfully has been apparent, especially his fondness for the headgears of various styles and forms, which despite all the varieties do not include the old standard political headgear of ‘Gandhi cap’. The great attention that he pays to his attire has made people forget a former home minister and governor of several states for his sin of changing his clothes several times a day even at an hour of grief in the nation.

India is still to come out of its ‘socialist’ mindset of post-Independence days, but it does sound bizarre to suggest a man’s (or a woman’s) sense of dress greatly influences the mind of the average Indian voter. Display of opulence in public continues to be decried and ‘simple living’ is applauded as a virtue. But a suit becoming a major factor in a poll? No, Sir.

It can be said that the way a public figure dresses is a political statement, usually when that figure shows no interest in wearing flashy clothes. Quite the contrary. Forget Modi’s expensive suit. Consider the ‘firebrand’ Socialist leader, George Fernandes. He made it a point to always appear in public in crumpled clothes.

A well-publicised fact was that he washed those clothes himself and did not send them for ironing. George Fernandes, forced by illness to live in oblivion, won and lost elections. But in none of those polls his crumpled kurta-pyjama played a major role. 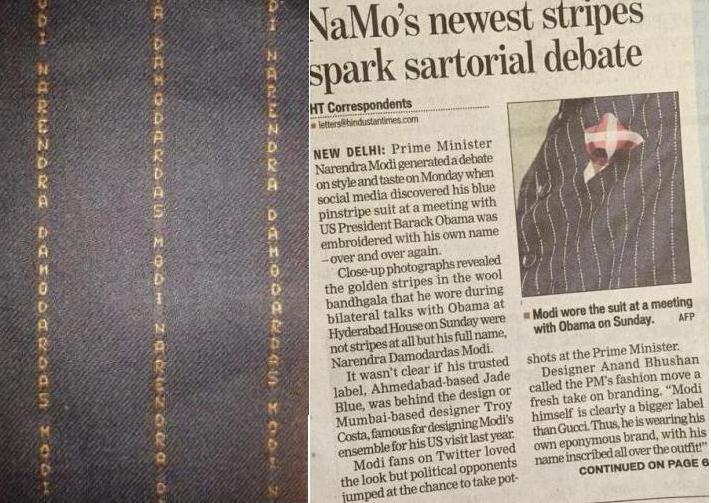 Modi may have heralded a new era of sartorial politics; even the new kid on the bloc, Arvind Kejriwal, may have made a contribution by appearing with a muffler wrapped around his face, but it can be seen that still the majority of Indian politicians prefer to be attired in white clothes—usually dhoti or kurta-pyjama. Just when the ‘Gandhi cap’ was in danger of disappearing from the top of our ‘Netas’, Kejriwal’s Aam Admi Party seems to have provided it a fresh lease of life, though the topi (cap) is adorned with the party’s name and symbol.

If the criticism is about the cost of the ‘bandgala’ that Modi wore, the ‘common man’ has to rely solely on what Modi’s critics say. On their own, most Indians would have neither known nor cared about the cost of the controversial attire Modi wore that cold day in January. There is another famous Indian politician, a woman with a large following, who wears clothes that may not be as expensive as a Rs 10 lakh ‘bandgala’, but she makes that up by wearing sparkling diamonds. She may be out of favour of the voters at the moment, but nobody has claimed that this is because of her predilections for diamonds or gold.

But the Modi’s one million rupee buttoned-up jacket did make the headlines. It must have caused him a great deal of embarrassment, more comfortable as usually he is with adulation and praise. His party, the Bharatiya Janata Party did it best to fend off criticism on the subject at a time when Modi’s popularity appeared to be faltering since he took over in Delhi last May.

A Modi ‘loyalist’ of repute jumped to his rescue with gusto. When the Congress vice president, Rahul Gandhi, referred to the astronomical cost of the suit that Modi wore, Arun Jaitley dubbed it as marking ‘a new low’ in Indian politics. He has been faithfully chronicling new ‘lows’ in Indian politics from the time of the last Lok Sabha poll campaign in which the contribution of Narendra Modi was no doubt edifying, especially in relation to his choice of words for the mother and son Gandhi duo.

The BJP found it unacceptable that the Congress and other opposition parties were making a mountain out of a mere suit. When the criticism did not seem to go away, the BJP thought of a brilliant PR masterstroke: the controversial suit will be auctioned along with other gifts received by the prime minister in the last nine months and the proceeds will go to swell the funds for cleaning the Ganga. It was a clear case of killing two birds with one stone.

The criticism against Modi had been deflected by declaring that the money collected from the auction will go to serve a national cause and, what is more, is in line with the BJP’s ‘Hindutva’ agenda.

But there is also a chance that Modi and the BJP will have to endure with the ‘Rs 10-lakh suit’ controversy for many days ahead. It has emerged that the suit was given as a ‘gift’ to Modi by a Gujarati businessman who claims to be close to him. The said businessman was hoping that Modi would attend his son’s wedding wearing the special suit he had gifted him. When that did not appear possible, the businessman drew solace from the fact that he did wear on the day of his son’s wedding and the suit drew wide attention. 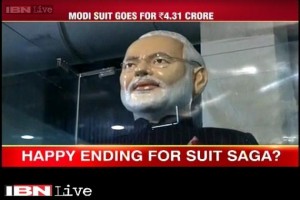 It is neither wrong nor unusual for heads of governments and states to receive gifts, sometimes expensive ones too. Most of it comes from their hosts when they travel abroad on state duty. Here was a very expensive ‘gift’, a suit made of especially chosen cloth that had Modi’s name embroidered on it, that was not handed over by a foreign host to his Indian visitor.

What if the suit had not caught the eye of the media? Will Modi have kept it in his personal wardrobe? There is no way of knowing for sure, but it is as much likely as unlikely that he would not have sent to an auction house which had apparently attracted some who were on the radar of the taxman. It is good that an adulatory Gujarati businessman is going to help a cause of ‘national’ interest of cleaning the dirty waters with a contribution of nearly 5 crore for a suit worn by our dear beloved prime minister!