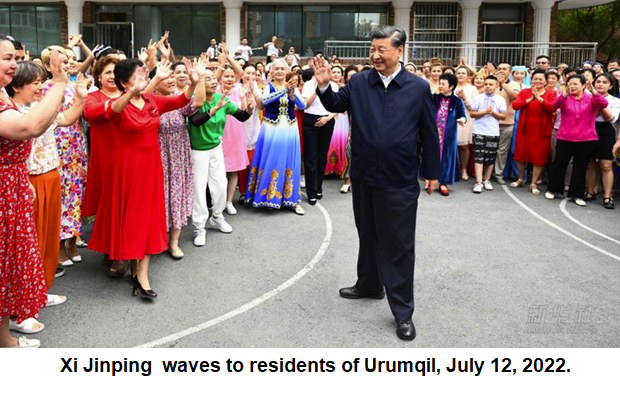 In a what appeared a very surprising move, was a high-profile visit by China’s President Xi Jinping on July 15 and more significantly, his rare meeting with Chinese military Commanders and troops, who are engaged with the Indian Military in Eastern Ladakh.   This was Jinping’s last day of official commitment as part of his four-day visit to the region.  The meeting was hosted at regional capital Urumqi which is strategically important.

In an apparent bit to boost the morale of the Chinese troops confronting India, Xi fully “affirmed the outstanding contribution made by the Chinese troops garrisoned in Xinjiang to strengthen border defence and stabilize Xinjiang” Interestingly, the Chinese President met the military personnel in his capacity as the Chief of the Central Military Commission (CMC).It may be recalled that troops stationed in Xinjiang, which borders Ladakh, have been involved in the Line of Actual Control (LAC) stand-off which has been going on for more than two years since tensions began in April 2020.

The 16th round of talks between military commanders from India’s 14 Corps and the PLA’s South Xinjiang Military District were set for July 17, taking place more than four months since the last round – the longest gap in the talks to take forward disengagement in the Chinese belligerent areas in Hot Springs, Demchok and Depsang.

Xi’s meeting with the Xinjiang military leaders, according to China watchers, underlined his backing for the PLA’s strategy on the India border, which has, in the past months seen, on the one hand, measures to step up infrastructure in the forward areas to enable permanent stationing of troops closer to the LAC – including through the construction of a bridge across Pangong Tso – and on the other, delaying disengagement (as part of tactics)  through the slow moving talks and  a blatant concurrence to a refusal to agree to the restoration of the status quo. Among the PLA soldiers who met Xi, was the Galwan Valley regiment commander Qi Fabo, who was among five soldiers recognized with military honours by the CMC in 2021 – four others were recognized posthumously.

Meanwhile, according to the media, the principal focus of the Xinjiang visit was, however, internal security of the region rather than the border.  Xi called for “enhanced efforts” to “uphold the principle that Islam in China must be Chinese in orientation”.

Further, it was stressed that the normal religious needs of religious believers should be ensured and they should be united closely around the Party and the government.  Xi called for educating and guiding people of all ethnic groups to strengthen their identification with the “motherland, the Chinese nation, Chinese culture, the CPC and socialism with Chinese tenets of polity and religion.

In a separate development, during the part of the same trip, President Xi Jinping called upon the concerned officials to intensify efforts to uphold the principle that Islam in China must be exclusively Chinese in orientation and all faiths in China should adapt to the socialist society vigoursly followed by the ruling Chinese Communist Party (CPC).

This statement is hugely significant as it reinforces the consistent Chinese stand on the Uighur Muslims who are predominantly present in the Xinjiang region and have been struggling for an independent East Turkestan with Islam as their religion.  However, Chinese highhandedness on the Uighurs are universally well known and have been receiving global condemnation by the UN and several prominent human rights groups.

During his four-day tour of the region, which started on July 12, Xi met with a wide range of officials.  He stressed fostering of strong sense of community for the Chinese nation, promoting exchanges, interactions and integration among different ethnic groups. He also underlined the need to improve the governance capacity of religious affairs and realize the healthy development of religions.  This statement also merits a close scrutiny.

In the past few years, the President has been advocating the sinicisation of Islam which broadly means brining it in tune with the policies of the ruling Communist Party.  Stressing the importance of cultural identity, Xi also called for sensitizing the people of all ethnic groups to strengthen their identification with China, Chinese culture, the CPC and socialism with Chinese characteristics.  China has been battling with allegations of mass incarcerations of Uighur Muslims in camps, which Beijing dismisses by describing them as de-radicalization and education centres.

In sum, Xi Jinping’s most recent visit to Xinjiang signals two things.  One, message to India through his “motivating” speech about Chinese military preparedness to face any eventuality.  Also, instilling socialist and communist doses to the military in line with the party ideology.

And, to stress in no unambiguous terms that Muslims in the Western province of Xinjiang have to tailor their religion into the Chinese mould. This will adversely affect the spirit of Islam, the Uighurs are trying to practice.

This apart, it signals the human rights’ groups and the world at large about the Chinese obstinacy to suppress the religious freedom of the Uighurs.  So, the status quo on these minority Muslim minority remains and there is no sign of any abatement in the brutal and insensitive treatment towards the Uighurs and their religious and political aspirations, as is prevalent today.  (Courtesy; Asian Age, Dhaka)