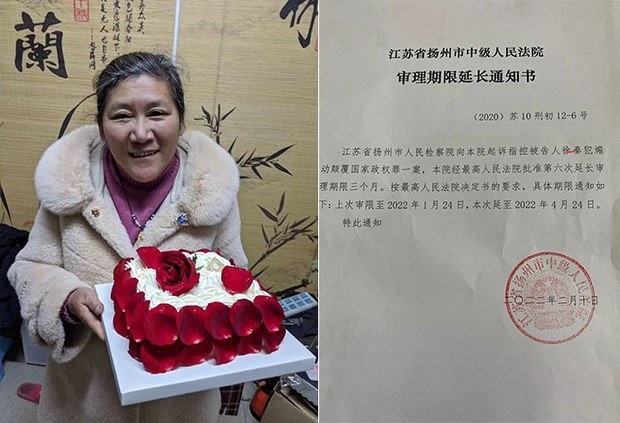 Xu Qin, a key figure in the China Rights Observer group founded by jailed veteran dissident Qin Yongmin, is now using a wheelchair while in a police-run detention center in the eastern Chinese province of Jiangsu, says a Radio Free Asia (RFA) report.

Xu, 60, is currently being held at the Yangmiao Detention Center in Yangzhou City, where she has been on hunger strike in protest at the loss of letter-writing and receiving privileges, and a months-long ban on meetings with her lawyer.

Her lawyer Ji Zhongjiu was finally allowed to meet with her on June 10, when Xu could walk, and again on Wednesday, when she was brought to meet with him in a wheelchair.

“When Xu Qin met with lawyer Ji Zhongjiu, they pushed her out for the meeting in a wheelchair,” Xu’s husband Tang Zhi told RFA.

“The previous meeting with the lawyer was on June 10; Xu Qin became paralyzed on June 27,” Tang said.

“Today, when Ji Zhongjiu saw her, she was in a wheelchair.”

Tang said Xu’s blood pressure has been unstable, and her eyesight and hearing have deteriorated in detention.

But he has been unable to get confirmation of her medical diagnoses from the authorities.

“They refused to talk about it,” he said. “I called the state security police today, and he told me I was talking nonsense.”

“He said he called yesterday to ask about her and they told him she was in good health.”

Xu is being held on suspicion of “picking quarrels and stirring up trouble,” a public order charge typically used in the initial detention of activists and peaceful critics of the ruling Chinese Communist Party (CCP).

A vocal supporter of a number of high-profile human rights cases, including that of detained human rights lawyer Yu Wensheng, she was detained under “residential surveillance at a designated location,” a form of incommunicado detention rights groups say puts detainees at greater risk of torture and mistreatment.

Xu’s trial was suspended by the Yangzhou Intermediate People’s Court in an April 22 ruling that cited “unavoidable circumstances,” but gave no further details.

Tang said her lawyer had told him that the trial had been suspended for the sixth time at the behest of state security police, which he believes was the result of Xu’s refusal to plead guilty or “confess” to the charges against her.

The overseas-based Chinese Human Rights Defenders (CHRD) network tweeted about the meeting between Xu and Ji on Wednesday: “Xu was sitting in a wheelchair, looking exhausted, and with poor physical health.”

“But even in light of her other physical conditions (heart disease, high blood pressure, & having suffered a stroke), and even after being detained in total for nearly two years cumulatively, the authorities still have not been able to shake her determination to plead not guilty!” the group said.

Xu was detained on Feb. 9, 2018 at her home in Jiangsu’s Gaoyou city, and placed under criminal detention the next day on suspicion of “picking quarrels and stirring up trouble.”

She was transferred into “residential surveillance at a designated location” a few weeks later, and the charges changed to the more serious “incitement to subvert state power.”

She was released, apparently on bail, then re-detained by police on Nov. 5, 2021, and has been awaiting trial since then, CHRD said.###