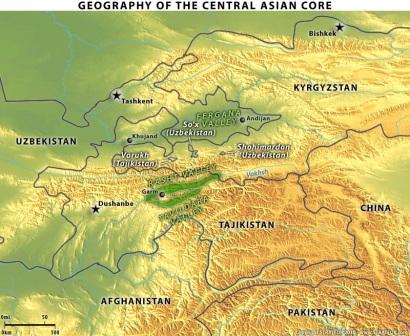 Tajikistan’s military continues to conduct security sweeps in the Rasht Valley in the eastern part of the country to catch roughly two dozen high-profile Islamist militants who escaped from a Dushanbe prison in August. The chairman of Tajikistan’s State National Security Committee announced Nov. 9 that these special operations have been successful and would soon be completed. However, the Tajik military has announced it will retain its presence there, and the Defense Ministry is setting up special training centers from which to base operations into the mountainous region surrounding the Rasht Valley.

These security sweeps began just over two months ago, and there are conflicting accounts of how successful they have been in rounding up the militants. Tajik military and government spokesmen have said that most of the escapees have been either captured or killed and that roughly 80 Tajik soldiers have been killed hunting them down. However, Tajik media have given higher estimates of the number of military casualties, and STRATFOR sources in Central Asia have said the number of deaths and injuries in various firefights might actually be closer to a few hundred. The region’s remoteness and the sensitive nature of the security operations have made such reports difficult to verify.

The very purpose of these security operations has also been called into question within the country and the wider region. The official reason for the sweeps is to round up the escaped militants, but according to STRATFOR sources, preparations for these special operations in the Rasht Valley were being made long before the jailbreak. There are also unconfirmed reports that none of the escapees were from the Rasht Valley, and while the valley’s mountainous terrain does make it a good location to seek refuge, it does not guarantee that locals there would willingly harbor the fugitives. The security forces’ ultimate goal could center on growing concerns that remnants of a previously key regional militant group — the Islamic Movement of Uzbekistan (IMU) — could be regaining strength in the country.

The IMU’s Revival and Concerns Beyond Tajikistan

The IMU is a radical Islamist militant group that formed shortly after the collapse of the Soviet Union in the populous and strategic region of the Fergana Valley in Central Asia. This area, which is split among Tajikistan, Uzbekistan and Kyrgyzstan, proved to be a strategic battleground for the IMU, which sought to overthrow Uzbek President Islam Karimov’s government and replace it with an ultraconservative Islamic state based on Shariah. Ultimately, the IMU sought to create an Islamist polity centered in the Fergana Valley that would stretch across Central Asia. Karimov clamped down on the IMU within Uzbekistan, but the chaos in neighboring Tajikistan during the country’s civil war from 1992 to 1997 created suitable conditions for the IMU to seek shelter, organize and conduct attacks. Subsequently, in the late 1990s and early 2000s, the group was active throughout the Fergana Valley, carrying out attacks such as bombings in southern Kyrgyzstan and an assassination attempt on Karimov in 1999.

Tajikistan Security Sweeps and the Possible Return of the IMU

However, after the U.S. invasion of Afghanistan in 2001, Central Asian governments — with U.S. assistance — cracked down on the IMU harshly, due to the group’s association with the Taliban in neighboring Afghanistan. The IMU mostly was driven out of Central Asia into Afghanistan, where in late 2001 the group lost its founder and then-leader Juma Namangani in a U.S. airstrike. The leftover elements of the IMU then moved into Pakistan and have spent the last several years in the area along the Afghan-Pakistani border, where they sought sanctuary (although IMU members were also targeted in U.S. unmanned aerial vehicle strikes that killed several IMU fighters, including former IMU chief Tahir Yuldashev, who had taken over after Namangani’s death). In these Pakistani borderlands, the Uzbek-dominated IMU faced friction with the Pashtuns, and were also the target of Pakistani security operations in South Waziristan agency. Potential upcoming operations in North Waziristan make this area less attractive than in recent years, providing a reason for the IMU to leave Pakistan. At the same time, talk about an IMU revival in Central Asia has intensified recently, particularly since several of the escapees from the August jailbreak reportedly were IMU members.

There is speculation in Tajikistan that the recent security operations have actually been a search for Mullah Abdullah, an opposition commander during Tajikistan’s civil war who fled to Afghanistan. Abdullah is a key member of the IMU and reportedly has returned in recent years to the Rasht Valley to organize new operations, including the attack on a Tajik police station in 2009 that led to the imprisonment of several IMU members — the same prisoners who escaped in August.

Since the jailbreak, there have been several attacks in Tajikistan, including the shooting down of a Tajik military helicopter and the ambush of Tajik security forces in the Rasht Valley. In the latter attack — the deadliest in Tajikistan in more than 10 years — at least 25 servicemen were killed. The IMU claimed responsibility for the attack, and while that claim has been disputed, it has also prompted fears that the militant group has returned to Tajikistan in the form of a new generation of battle-hardened fighters, educated and trained by the old generation in Pakistan and Afghanistan. The IMU also reportedly has a new leader, Usmon Odil, former IMU chief Yuldashev’s son-in-law. According to STRATFOR sources, Odil was trained and directed to attack targets in the Fergana Valley, which is particularly worrisome to the Tajik, Uzbek and Kyrgyz governments. But the group’s opaque nature and loose structure (much like al Qaeda’s) precludes any definitive affirmation of its current status, and it remains unclear what the group is capable of or whether its methods have changed over the past decade.

In the months since the prison break, all militant activity in the region has been focused on Tajikistan, primarily the Rasht Valley. Whether the IMU will be able to operate outside of this specific arena and move into the broader Fergana Valley will be a true test of the militant movement’s strength. There is a big difference between militants taking an opportunistic potshot at a military convoy in the Rasht Valley and coordinating a more ambitious attack beyond Tajikistan’s borders. So far, there have been only limited attacks outside the Rasht Valley since the jailbreak, such as a car bombing in the northern city of Khujand claimed by Jamaat Ansarullah, a new group that allegedly has ties to the IMU (these ties have been disputed). Immediately following the attack, Tajik authorities claimed that the bombing was the result of a local dispute and was not militant in nature.

The strength of the governments and their security forces is one of the key factors that will determine how successful the IMU — or any other militant outfits that have fragmented and realigned since the IMU moved into Southwest Asia — will be in regrouping and conducting attacks in the region. The Uzbek government has maintained a security clampdown on its portion of the Fergana Valley and has been able to handle any security issues by itself, but Tajik security forces are not quite as strong (as the recent attacks have shown) and may have to rely on help from Russia. Kyrgyzstan is especially vulnerable after experiencing a revolution and ethnic violence that Kyrgyz security forces have been unable to contain, and the Rasht Valley is uncomfortably close to the Kyrgyz border. Meanwhile, Russia is sending troops into both Tajikistan and Kyrgyzstan.

But troop strength alone does not guarantee that militants will not be able to carry out further attacks; the attitude of the population toward the insurgents and the intelligence capabilities of the national governments are also significant factors. The United States will also affect security in the region when it starts withdrawing its forces from Afghanistan. This will result in greater instability on the already porous Tajik-Afghan border and could lead to more substantial militant traffic throughout the region.

Tajikistan Security Sweeps and the Possible Return of the IMU

However, there are several obstacles to the IMU’s return to the region as a fully fledged militant group. First, given the region’s mountainous terrain and complex geography, it would be a perilous trek to the Fergana Valley from the Afghan-Pakistani tribal belt. The IMU has been wandering around looking for a safe-haven in which to regroup, but up to this point, militaries and security forces throughout the region have kept the group from taking root anywhere. It is unclear whether the group has returned to the Fergana Valley or, if it has, to what degree.

It is also unclear whether the IMU’s current structure and goals are even the same as in the past. When militant groups are forced to relocate, and when they lose leaders, they tend to fragment. The post-9/11 environment has contributed greatly to this phenomenon. Some militants remain true to the original cause, while some join new causes like al Qaeda’s global jihadist effort. Others focus on more local issues, like fighting in Afghanistan. A great many militants in the Pakistani tribal belt are also part of the Taliban’s war against the Pakistani state. There is also the issue of ethnic tensions between Central Asian Turkic militants and the Arab-dominated al Qaeda milieu, as well as ideological disagreements within and between these groups.

Since it has been a decade since the group has staged any real uprising, the IMU’s support network in Tajikistan and Uzbekistan has been severely weakened. This capability will take time to rebuild (though militants have continued smuggling drugs into Russia through Central Asia, which gives them contacts and a financial base). The IMU has long since strayed from its original mission of overthrowing the Uzbek government and has absorbed members of different nationalities and ethnicities from several other militant groups to the point where it is not really clear what the group’s primary purpose is (regional, global or otherwise). In addition, the populations in nearly all of Uzbekistan and most of Tajikistan do not welcome the return of militant groups or their organizing efforts in Central Asia. However, while the Uzbek government has been handling the situation in a low-key manner, the Tajik government has been stoking the fire of anti-government sentiment with its moves against conservative Islamic religious practices, such as banning religious dress, closing mosques and repressing media. Dushanbe’s actions have created controversy among the public and could work in favor of a group like the IMU.

As the IMU has shown elsewhere in the region over the past decade, it will certainly be able to use its tradecraft to kill locals and government security forces from time to time. But the IMU has a poor track record of establishing itself in any single area for more than a couple of years. If the IMU is limited in its operations to the Rasht Valley and Tajikistan, then it would not appear to be regaining the momentum it lost in the early 2000s. If the IMU begins regrouping and striking into the Fergana Valley, in areas like Uzbekistan and southern Kyrgyzstan, then that would show a stronger capability and present more of a threat to governments in Central Asia. Ultimately, it will be the IMU’s ability to be active and build a network outside of the Rasht Valley that will show whether the militant group can be as effective across a broad area as it was a decade ago.

“Tajikistan Security Sweeps and the Possible Return of the IMU is republished with permission of STRATFOR.”