The opening of the bridge over the turbulent Padma River caps a key infrastructure goal by Hasina and has been billed by her government as the jewel in its crown, which shows the grit, determination and resilience of the administration in the face of international pressure and domestic criticism.

Construction of the six-kilometer bridge by a Chinese company began in November 2015, with the aim of connecting the country’s southwestern region with the capital, Dhaka, via road and rail. The double-layer steel truss bridge incorporates a four-lane highway on an upper level along with a single-track railway on the lower level. 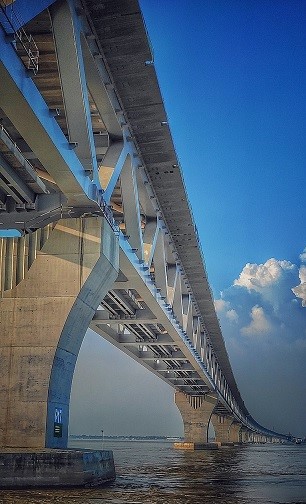 Costing $3.86 billion, it is one of the largest projects Bangladesh has ever undertaken. The entire amount is financed by its own government after the World Bank and other global lending agencies pulled out of the project following a corruption scandal involving a Canadian construction company linked to the bridge.

Canadian engineering firm SNC-Lavalin was accused of bribing officials overseeing the project and was banned from bidding on World Bank projects for a decade. Prosecutors in Canada eventually declined to pursue graft charges against company executives after a court ruled some wiretap evidence against them was inadmissible.

Sheikh Hasina declared that her government would self-fund the project. Her decision faced a battery of skepticism from the country’s economists as well as political opponents, since Bangladesh didn’t have any prior experience building such infrastructure without financial support from several donors.

At Saturday’s bridge opening ceremony, Hasina reminded a crowd about that skepticism. “Some people said we would always be beholden to others but our father of the nation, Bangabandhu Sheikh Mujibur Rahman, (Hasina’s father) taught us the importance of self-respect.”

“This Padma Bridge is not a pile of brick and cement,” she said. “This bridge is a symbol of Bangladesh’s pride, honor and ability.”

Why is the bridge significant?

Mahfuz Anam, editor of The Daily Star, Bangladesh’s highest circulated English daily newspaper, wrote in a commentary that the “Padma Bridge marks the most public and direct defiance of a multilateral organization like the World Bank and through it, of donor practice in general.”

Anam, often a staunch critic of Hasina, wrote that, “many countries make their own bridges and with their own resources” but building this bridge is a significant step for Bangladesh, because “it breaks down forever our image of a country dependent on handouts.”

With a national election slated to be held next year, the construction of the bridge is seen by political pundits as the most significant achievement of the Hasina-led Awami League (AL) government in its three consecutive terms in office spanning over a decade.

The bridge will work as a direct gateway to the country’s poverty-stricken southwestern region, a major source of the party’s political support, and will significantly reduce travel time. The mighty Padma River separates the southwest from Dhaka and people are forced to travel on ferries or launches that make slow journeys. Perishable goods transported by truck often rot because of the long trip.

The bridge was built by the state-owned China Major Bridge Engineering Company, Ltd. and is seen by Beijing as a milestone for China-Bangladesh cooperation. Chinese state media attempted to claim it as part of the Belt and Road Infrastructure (BRI), an assertion the Bangladeshi government dismissed earlier this week.

Economist Mustafizur Rahman told VOA that Bangladesh’s bureaucracy never had the capability to execute such a megaproject. “It is reassuring to see that we can successfully complete structures like Padma Bridge. It’s a great booster for us.”

He also said the bridge would help grow Bangladesh’s gross domestic product (GDP) by 1.3% annually, and will increase jobs, service sector activity and tourism in the southwestern region.

Experts say construction of the bridge, which involved more than 4,000 engineers, one-third of which were Bangladeshi engineers, is a major technical achievement.

The bridge’s underwater pilings extend 122 meters deep, a world record, and it requires 41 support pillars. At some points in the river the water flow volume ranks second globally only after the Amazon River.

Is the cost too high?

The opposition criticized Hasina’s government for increasing the bridge’s construction budget threefold from its initial $1.2 billion over the years and accused authorities of constructing the bridge with one of the highest costs per kilometer.

Rumin Farhana, a lawmaker with the country’s main opposition Bangladesh Nationalist Party (BNP), told the parliament the Padma Bridge will be a textbook example of corruption. “If we compare the Padma Bridge with other bridges of similar or slightly longer length, we can call it golden bridge,” she said.

Rumin cited the cost of building the longest bridge in neighboring India, the Bhupen Hazarika Bridge, and said the construction of that nine-kilometer bridge cost only $156 million. “It is possible to build 30 Bhupen Hazarika bridges in India at the cost of one Padma Bridge here in Bangladesh,” she said.

“There are bigger bridges in the world than the Padma Bridge, but there is no bridge on a river as big and as unpredictable as the Padma River. For river training alone, we needed to spend more than $1 billion, which added to the cost,” he said.

Speaking with VOA, Germany-based Bangladeshi financial analyst and researcher Zia Hassan said no two bridges in the world are the same, so cost comparisons between bridges would often be misleading. “However, the comparison between the Crimean Bridge, built in three years at a cost of $3.69 billion across the Kerch Strait, with a similar pile depth (to the Padma Bridge) but three times as long (18.1 kilometers) brings the $3.868 billion spent on Padma Bridge into perspective,” he said.

The World Bank said that Bangladesh has the highest infrastructure costs in the world, which it attributes to a lack of competition in the bidding process and higher land acquisition costs.