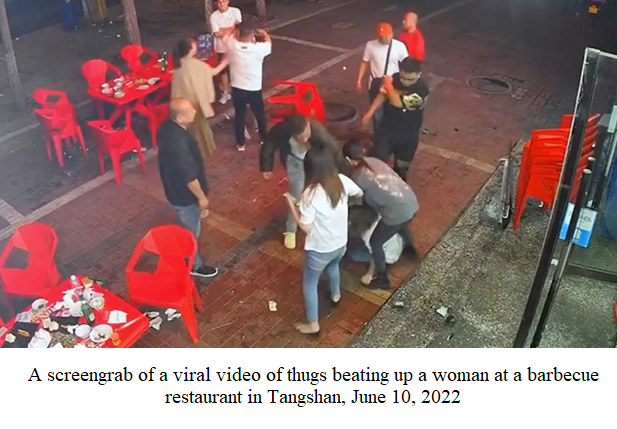 Authorities in the northern Chinese province of Hebei have launched a crackdown on “fake news,” in a move commentators said was likely a bid to suppress widespread reporting of the vicious beatings of women at a barbecue restaurant in Tangshan earlier this month.

The move comes amid social media reports that Tangshan police have been obstructing state media journalists as they try to follow up on a crackdown on organized crime in the city sparked by public outrage at the beating incident.

Its scope mirrors a campaign announced at the national level in the summer of 2021.

“[These government departments] have launched a special campaign against fake news and journalistic extortion,” the provincial government website said in a report published June 16.

“The chief task of this … campaign will be to crack down on journalistic extortion and fake news, investigate and punish fake media, fake reporters, and fake bureaus, and rectify ‘paid-for news’,” the report said.

The campaign will be led by a taskforce in the propaganda department of the provincial branch of the ruling Chinese Communist Party (CCP), it said.

Chinese journalist Lu Nan said the provincial authorities’ move to adopt the nationwide campaign is likely a direct attempt to shut down independent accounts of the Tangshan beatings and the anti-crime campaign that followed.

“All this means is that they want to keep up their total control over public expression,” he said.

Lu cited the case of the Guizhou TV reporter detained and interrogated by police after arriving at the Tangshan railway station.

“Just a few days ago, they were interrogating [journalists] one by one as they arrived in Tangshan, and even treated some journalists roughly who went to report there,” Lu said.

“The only reason for doing such things is to cover up the truth.”

“Why do they want to crack down on fake news? Because they are the ones who are fake,” Wang told RFA. “Some people want to report the truth, maybe citizen journalists, but they won’t be allowed.”

“Sometimes citizen journalists will volunteer to cover a certain story, sometimes for a fee, given that they have to take risks, that’s very reasonable,” he said.

A Zhejiang-based journalist surnamed Jiang said the local authorities are clearly keen to avoid any follow-up reporting of the Tangshan beatings, which prompted widespread shock and anger on social media.

“Naturally they need to lay down the law and frighten the media so as to suppress any follow-up reporting on the Tangshan beating incident,” Jiang said.

He added: “Shanghai lawyers have also gotten a notice from the municipal justice bureau saying they are banned from representing any of the victims of the Tangshan beatings,” Jiang said.

Two of the four women beaten by a gang of thugs at the restaurant remain in hospital 11 days after the attack, despite claims from the authorities that they had sustained “second degree minor injuries.”

The deputy chief of the Tangshan police Lubei branch, which was responsible for the initial handling of the case, has been fired, while the authorities have promised an investigation into the slow response to incidents and “serious violations of laws and discipline” by Tangshan’s police department.

Police arrived at the scene 28 minutes after they received the report, by which time the injured had already been sent to hospital.

Video footage of the incident showed four women who had been eating at a late-night barbecue restaurant being brutally attacked by a group of men in the early hours of June 10, after one of them harassed a woman, who flapped a hand at her harasser and fought back after she was slapped, prompting the others to join in to repel the man.

The attackers shoved the women to the ground, kicked them, threw a chair at them, and later dragged one of the women out of the restaurant to continue beating her outside. One was taken away on a stretcher with a visibly bloodied and swollen face.

The claim that the women sustained “minor injuries” was met with skepticism on social media.

But the CCP-backed Global Times said the official classification of “minor injuries” could include anything up to broken ribs, perforated eyeballs or rupture of tissues and organs.

It said five officials are being investigated for by the CCP’s own discipline inspection and supervision arm, including Ma Aijun, the head of the public security bureau of Lubei district in Tangshan.

By Qiao Long for RFA Mandarin and Chingman for RFA Cantonese