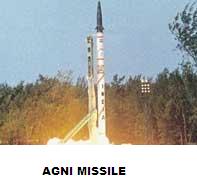 India on Sunday afternoon successfully test-fired a nuclear-capable, short range ballistic missile (SRBM) off the Orissa coast. Known as Agni-1, this indigenously developed the surface-to-surface, single-stage missile blasted off a mobile launcher  from the Integrated Test Range (ITR) at Wheeler Island, about 100 km from Balasore.

15 metre tall Agni-1 weighs 12 tonne and can carry payloads weighing up to one tonne. It has already been inducted into the Indian Army

The test met all parameters, according to S P Dash, Director, ITR.  ‘It was a fantastic mission’.

After piercing the sky, the missile re-entered the earth’s atmosphere and its dummy warhead impacted in the waters of the Bay of Bengal in the down range, a Defence ministry official said at the launch site,. ‘The guidance and re-entry system worked well’.