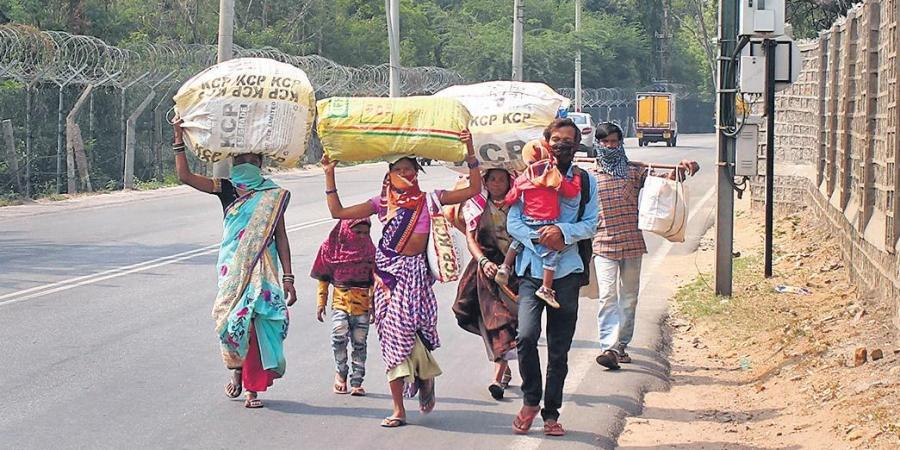 The government has made an incredibly callous, brazen and shameful admission in Parliament in a written reply. It says it is unaware of something that the whole world had watched with shocking belief early this summer: the death of well over 100 migrant workers during their exodus from cities to their villages soon after the prime minister had imposed a nation-wide lockdown after a four-hour notice in late March. Some NGOs say the number of deaths is over 900.

What is more, the government says it has no record of these deaths so there is no question of owning the responsibility for the travails of the millions of migrants who were forced to retreat to their homes when the lockdown snatched their source of livelihood in the cities where they had been working.

The casual attitude of the government should not come as a surprise because about the only thing that sees it racing ahead with gusto is its Hindutva agenda. The country’s economy is in ruins but the government manages to collect huge sums in the name of a dubious fund called PM CARES which is handled in a secretive manner. Its aim was said to be helping the people in distress after the outbreak of Covid-19 pandemic. It has been reported that Rs 1000 out of the PM CARES fund was allotted for the purchase of certain Covid equipment which was found to be bogus.

The government bemoans resource crunch whenever it is found deficient in helping the poor but shows no interest in scrapping extravagant plans that seem to be largely related to the ego of one man in the country. A particular mention may be made of the so-called Central Vista redevelopment plan that, according to current estimates, will cost at least Rs 25,000 corore. Then there is this project for a Bhavya (grand) Ram Temple at Ayodhya which must proceed at any cost so that it is completed before the next polls in UP.

The migrants’ march was an exodus of Biblical proportion and at the height of India’s cruel summer when the whole country becomes a furnace. Men, women, children—young, old and infirm—all were desperate to return to their homes, hundreds or thousands of miles away. They knew that things would not be any better in their impoverished homes but at least they would have the satisfaction of being with their loved ones and amidst more familiar surroundings.

For many days initially, the central government did nothing to help them reach their homes. So, many walked all the way; some travelled on their bicycles or whatever other means of transport they had; those who could spare or borrow money hired whatever contraption they could find to reach their destinations, often travelling in the form of human cargo which was a reminder of the journeys undertaken by illegal migrants to reach Europe.

Many perished on way, of illness and hunger or in ghastly accidents that shook the nation. There were heart rending images that flashed across the globe—a tiny tot playing with the shroud that covered his mother’s body who had died of hunger at a station in Bihar; a young Hindu man dying on the lap of a caring Muslim youth he had met only during the uncompleted homeward journey; a whole group of migrants being mowed down by a train in Maharashtra while they were resting on the tracks due to exhaustion after continuous walk on the road.

Many such images were splashed in the newspapers in India and abroad though most of the ‘Godi Media’, the name given to the electronic media blindly worshipping Narendra Modi and his government, ignored them. The government says it knew nothing about all this. Or, to be more precise, the government says it maintains no record of death of migrants in transit. But does that mean that the tragedies did not occur?

At the root of the problem is undoubtedly the thoughtless manner in which the lockdown was imposed. About the need for the lockdown there cannot be any two opinions; the important point is its timing. It does appear that Prime Minister Modi consulted no one when he went on air on the evening of March 23 to announce the lockdown which brought to a standstill all normal activities and movement of human beings and means of transport—just four hours after his broadcast.

No thought was given nor arrangements made to overcome the problems that were inevitable. How will the migrants, most of them daily-wage earners or employed in low-paid jobs, manage to meet their essential requirements when out of the blue they had been rendered jobless? How will they live in cities if they had no money to pay for their humble accommodation? And, finally, how will they reach their homes when there were no buses or trains?

Had the lockdown decision been taken after due consideration and planning, most of these problems would have been anticipated and voided. There would have been no need for the states and the central government to point accusing fingers at each other. The bulk of migrants would have been assured of safe passage to their homes and also provisions.

But this is a government which likes to sell dreams and lure people with tall promises that are not to be fulfilled. Modi is on record as having told the nation that he would drive away the coronavirus in 21 days when scientists in India and the world were saying that the new virus will stay for a year or so. A tested vaccine may bring the pandemic to an end. That will be presented as a victory of the Great Leader and the nation will forget and forgive everything painful of the past months.