CONGRESS politicians of Delhi school seldom speak their mind. When they do, they are careful enough to not harm the interests of the high command and at the same time they ensure that their place under the Banyan tree is safe and secure. So much so, the comments of Chief Minister, Sheila Dixit (76), against the Delhi Police are good food for thought. 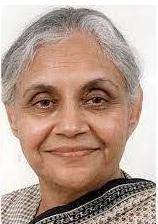 On the Women’s Day, she lamented that her own daughter felt insecure in Delhi as it became a crime capital of India. She did not field the obvious question – if a CM’s daughter, who enjoys the protective ring that is available to her mother, finds it unsafe, what about ladies from aam aadmi households, who travel by buses and three wheelers, and are, therefore, exposed to the dangers from a Ram Singh lurking in the shadows. None of them would like in their worst dreams even to go through the hell suffered by Nirbhay last year.

What a shame it is for the Congress, which is ruling Delhi and the nation? And which is about to seek a fresh five-year mandate soon.

This is not for the first time that she has been targeting the City police but it is certainly the first time when a chief minister has expressed lack of confidence in the police setup.

She is not new to the corridors of power. She has been the chief minister of Delhi for more than a decade. She may have got the job on the platter because of internal equations in the Congress that had something to do with a Telugu bidda. Like her, all those who were part of that particular equation had found luck smile on them even before the Congress –led UPA happened.

Well, it is a subject matter good enough for a wider public debate in the context of Congress politics after Rajiv Gandhi. When will such a debate take place? It is difficult to crystal gaze.

The celebrations marking the fifteen year rein of Sonia Gandhi (61) as Congress President offer a perfect backdrop to undertake a retrospect and prospect for the 127-year-old organisation that had seen several splits down the years.

Sadly, at the moment the issue appears destined to be a Friday resolution that Parliament sees listed on the agenda but seldom comes up for discussion.

Undeniably, political calculations have pump-primed Sheila-speak against the police. The Nirbhya tragedy had brought people to the streets. Their anger was targeted at the Congress.

Neither Sheila Dixit nor her high command ventured out when the young and old made India Gate the Tahrir Square of Delhi. In fact, both simply vanished from the front lines ignoring the fact that the problem confronting the police was political at the core and not a mere law and order issue.

But then, Sheila is a hardcore Delhiite, who did her apprenticeship under Uma Shankar Dixit, her father –in-law and home minister in the Indira days. She knows the survival mantra. And it’s that the best way to deflect public anger is to speak their language. This is what she has been doing after the lead taken by her lawmaker son, Sandeep Dixit. He did it rather crudely though.

The law of Delhi is such that the Chief Minister has to knock at the doors of the Union Home Minister in case of a dispute or discard with the Lieutenant Governor. Often, the Home Ministry’s bureaucracy sides with the resident of the Rajnivas.

During her spat with the Police Commissioner, the Babus of North Block threw their weight behind the policeman. Rarely the IAS fraternity sides with the IPS but in this instant case they did because of the fear of getting engulfed.

In matters of Delhi police, the chief minister is kept in the loop by way of courtesy or to put more bluntly because of the old bureaucratic mantra of keeping all politicians in good humour. This arrangement suits her, and that was why she did not murmur in protest even once in the past decade plus of her stewardship of Delhi government.

Electoral calculations are what make her turn against the police. She may not be alone in such thinking. Otherwise, fellow Congressmen of Delhi would have made her life miserable. For them, she is an outsider still, as her place of birth is Merut in western UP. They have been tolerating her because she is in the good books of 10 Janpath. Post-Nirbhay, her NGO-centric son, has been made a spokesman of AICC.

So, will Sheila’s gamble pay off? Will people fall a prey to her bait? Difficult to say though from all accounts she knows her onions. Election is a big ticket exercise.

As of now, this much can be said, going by the past precedents.

Chidambaram’s budgets have not won elections. His dream budget made his Prime Minister Deva Gowda dream big and the voters to ignore them both.

With every passing day, it is becoming clear that in his bid to please Sonia Gandhi, who has to win the election for the Congress, and Manmohan Singh, who has to run the government, Chidambaram has ended up serving neither.

An articulate driver of a Maharashtra RTC bus offered an insight into what may be in store during my journey from Nasik to Pune the other day.

Speaking a mixture of Marathi and Hindi, he said, “In Gujarat, the roads are excellent. So are their buses. Our roads are potholed and busses are rickety. There, it is only BJP. Here there is Sena, RPI and BJP. All are just small fray. Congress is corrupt. Inefficient. So, what? People will stamp on the hand once again!”

A TINA factor at work for Sheila and her high command? We will have to wait for a while to know.