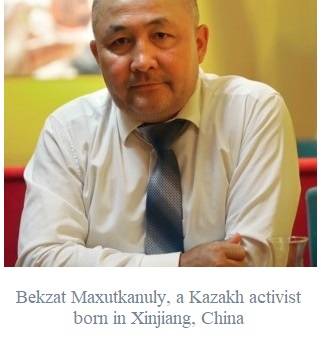 Five years ago, Bekzat Maxutkanuly, a small clothing merchant in Kazakhstan, was not interested in politics but was also concerned about rumors of a brewing crackdown in China’s Xinjiang region, where he was born.

As soldiers march with the national anthem to welcome Chinese leader Xi Jinping to Kazakhstan, Masut kanoulli is preparing to visit every village in the country’s vast hinterland one by one, joining a party challenging Beijing rather than welcoming it.

The 46-year-old Kazakh, who was born in China, told The Associated Press: “I never intended to go into politics. But then I began to realize that the situation in Xinjiang was a big problem and wouldn’t pass in a year or two. The story of his political awakening reveals how China’s crackdown on Uighurs and other Muslim groups in Xinjiang has alienated many people in Central Asia, despite Beijing’s enormous influence in the central Asian governments.

When arrests in Xinjiang began, tens of thousands of Kazakhs, Kyrgyz, Uzbeks and other Central Asian ethnic groups were abducted by authorities along with Uighurs and thrown into vast networks of internment camps and prisons.

The Kazakh government privately pleaded with Beijing to release ethnic Kazakhs implicated in the crackdown. But in public, they said nothing, and when the U.N. General Assembly voted on whether to condemn or support China’s Xinjiang policy, Kazakhstan abstained.

China is a major investor in Kazakhstan’s oil and gas industry and has provided billions of dollars in loans to build railways and highways. When Mr. Xi arrived in Kazakhstan this week, President Kassym-Jomart Tokayev greeted him on the airport tarmac and hosted him with a grand state dinner.

Given the way Xi has treated Kazakhs, Masut Kanouli called the visit “insulting.” He said: “Now is really not the time for him to visit. ”

Undercover police officers watched their meetings, and key figures were summoned for questioning. In 2019, police arrested Serkejan in the hotel bathroom and sent him to jail. Later that year, Serkjan fled Kazakhstan and appointed Masut Kanouli as the new leader of the Atajurt Volunteer Organization.

Now, after beatings, protests and dozens of police clashes, Masut Kanoulli hopes that atajuart Volunteers will bring about a fundamental change: a democratic Kazakhstan where Chinese-born Kazakhs and others will be free to express their concerns.

Years of government repression have taught him and other members of his team that real power is critical to achieving results, he said. Masut canouli said that’s why a formal political party, not just a grassroots group, is necessary.

“The Kazakh government is helping the Chinese government,” he said. They tried to stop us. In order to achieve our goals, we first need to change the political situation in Kazakhstan. His

odds of success are slim. For nearly three decades, Kazakhstan has been ruled by a Soviet-era strongman. His successor, a former Soviet diplomat in Beijing, also appears less pro-democracy. Political opponents are monitored, harassed and sometimes even driven out of the country.

Still, Kazakhstan has cultivated good relations with the West to balance the power of its neighbors Russia and China. In a region rife with brutal rulers, Kazakhstan’s leaders have emulated technocratic Singapore – leaving some room for organizing civil society.

Masut canouli said his plan is to get as many as 50,000 people into the party, a figure 10 times the legal minimum required to register a political party.

It would be difficult and would require him to go door-to-door to register elderly people deep in the countryside, some of whom were illiterate or did not have mobile phones.

Out of suspicion of espionage and fear of state power, the Chinese-born Kazakh community is deeply divided. Some are skeptical of Masut Canoulli, wondering what his motives are and how far he can go in challenging state power.

Still, he has supporters. Nurlan Kokteubai, a former teacher who spent seven months in a camp in Xinjiang, joined the party. He said he would do anything to get more attention to the plight of Chinese-born Kazakhs.

Koktubai said: “The Kazakh government does not support us. Tokayev listened to Xi Jinping. He was referring to the current President of Kazakhstan, Kassem-Chomart Tokayev. He also said: “If you don’t have a political party, what kind of power can you have?” This is a better way to do so. Kazakhstan

is experiencing turmoil. The January protests became violent after mobs broke in, smashed cars and set fires to buildings. The Kazakh government invited Russian troops to suppress the uprising, killing hundreds of people.

Masut Kanouli was one of the protesters in a march in the Kazakh capital in January. He said his nose was beaten by police and he spent the night in prison.

Still, he was determined to keep going.

He said: “If I am arrested, so be it. If I don’t speak up, who will help the Kazakhs in Xinjiang? There is always someone who needs to speak up. ”