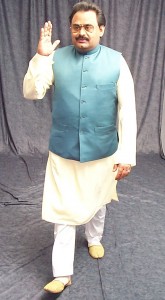 Altaf Hussain, the London based leader of the Mohajirs in the Sindh province, is not known to be an old man in a hurry but he appears to be testing the nerves of fellow Sindhi, Asif Zardari and his dapper prime minister Gilani, who have, of late, become Pakistan’s TINA – there is no alternative – syndrome. Otherwise, what is the need for him to go public with the plan to quit the ruling coalition? Till Monday (Dec 27) night, when Altaf’s decision was announced, it appeared as though Zardari and Co have survived the scare created by the Deobandi Maulana, who has earned the sobriquet ‘roll back Fazl’ with his brand of politics. Also because the real issue, the IMF inspired new value added tax has been put on the back burner, and the IMF itself has reconciled, at Washington’s behest, to the need to give a reprieve to the bankrupt regime in Islamabad lest it collapses with no one – not even the army chief- willing to take on the reins.

True to its form and style, the Muttahida Qaumi Movement (MQM) held its coordination committee meeting simultaneously in London and Karachi and decided to part ways with the PPP in Sindh, and also in the Federal capital, where it has two ministers, Dr Farooq Sattar, who holds the portfolio of ministry for Overseas Pakistanis, and Babar Ghauri, who is in-charge of ports and shipping.

One provocation was the outburst of the Sindh Home Minister Dr Zulfiqar Mirza against the MQM in the context of targetted killings in Karachi. His latest salvo delivered on the occasion of Benazir’s death anniversary, was rather too much for Altaf Hussain, who has always been the X- factor of Pakistani politics.

“The Muttahida Qaumi Movement (MQM) joined the PPP-led government on its own and may part ways if it so desires but it is difficult for any party to walk out of the power corridors”, Mirza said at Sukkur. In the same breath, he added rather mischievously, ‘I am not challenging the MQM. My challenge is only to those who are throwing corpses of innocent citizens in bags’. .

Mavericks are an established feature of Peoples Party of Pakistan, PPP, which is an amorphous group of opportunists, traders, feudals, land lords and Islamists with a sprinkling of left intellectuals, and Washington limpets, who, to the dismay of fellow PPPits, have perfected the art of hogging the limelight in the ‘secular space’ through the English media. Mirza belongs to this hollowed tradition.

Yet, Mirza could have been controlled, if only Asif Zardari and Gillani wanted to. Their pre-occupation with much larger issues of managing the Americans and the Army, though not necessarily in that order, probably didn’t make them take a serious view of l’affaire Mirza. At least Altaf cannot be faulted on the Mirza factor. Because his 10-day ultimatum delivered on December 13 was Mirza centric.

Zardari imposed the gag order on PPP leaders on Dec 27 during his interaction with them at a function to pay tributes to his late wife. It was a decision whose time was already over. He could have picked up the phone and talked to Altaf Hussain, who is having a running spat with Nawaz Sharif, to every one’s delight in Muzaffarabad, Peshawar and Rawalpindi. At least he could have asked the family loyalist at the helm of High Commission in London, to massage Altaf’s ego. Both these non-actions will remain wrapped in Zardari mystery.

So, is there a threat to the existence of Zardari-Gillani combine? The sedate daily, Dawn has set at rest any such possibility with its headline that read: “Muttahida quits federal Govt, but will sit on treasury benches. MQM fires warning salvo”.

In just 90 words, the daily’s correspondent, Azfarul Ashfaque, summed up the scene and the way he did neatly and clearly is an object lesson to every budding journo on the political beat. For the sheer simplicity of the style and direct narrative, his opening lines need to be quoted verbatim. “In what appears to be an attempt to mount pressure on the Pakistan People’s Party, the Muttahida Qaumi Movement decided on Monday night to quit the coalition government at the centre in protest against the former’s reluctance to openly disown the Sindh home minister’s diatribe against the latter. However, the MQM decided to continue sitting on the treasury benches and support the government for the cause of democracy. The MQM made it clear that quitting the federal cabinet did not mean that the party was joining the opposition in parliament…”

What about Sindh? “MQM parliamentarians will continue to sit on the treasury benches in the National Assembly, Senate and the Sindh Assembly because the party does not want to destabilise the government,” MQM leader Faisal Subzwari told Dawn. He said any decision to quit the Sindh government or not would be taken later.

If Altaf Hussain is not going to rock the Zardari boat, why he is staging a song and drama spectacle? Why did he reject President’ invitation to send a six-member MQM delegation for a ‘heart-to-heart’ talk? These ifs and buts are true to Altaf brand of politics. The official reason that the MQM was busy in making arrangements for the public meeting at Bhitshah on Saturday (Dec 27), and hence could not respond to the invitation is neither here nor there.

Bhitshah has spiritual significance. It is the final resting place of renowned Sufi, Shah Abdul Latif Bhittai. People from all walks of Sindh visit the Sufi’s mausoleum and it is revered as the symbol of Sindhi culture and nationalism. This nugget and the fact that it was the first ever MQM rally in interior Sindh gave a new meaning to Bhitshah rally. About it a little while later.

Interestingly, Altaf and his brains trust in MQM forgot about Mirza’s diatribe in their parting shot. In fact, their statement made no mention of the deadline given to the PPP, the controversial issue of revival of the commissioner system in Sindh and imposition of IMF guided value added tax under the garb of Reformed General Sales Tax (RGST). It only focussed on the party’s relations with the federal government. True grandstanding, it is.

During his long colourful innings, the MQM leader had partnered with the PPP and its betenoire, PML-Nawaz, appearing to them as their manna of Pakistan politics. The PPP allied with him once in the past in 1988; this current alliance is their second stint together that has lasted exactly 23 months and one day from January 26, 2009. The 1988 alliance broke up in about a year after a bitter public spat. The tie-up with the Nawaz Sharif’s first government also did not last long. The national parties always view the MQM as an urban Sindh phenomenon and hence they have been courting it.

The Bhitshah rally signals a paradigm shift in the MQM profile for the first time in its 22-year- old existence. This is what should make PPP egg-heads to sit up and put their thinking caps. Rural Sindh sways to the Bhutto magic; as the daughter of Larkana, Benazir Bhutto, has the martyr’s halo that can make the PPP win the votes.

By procrastinating on the assassination probe (like Liaquat Ali Khan- the first prime minister’s assassination, Benazir’s assassination remains an unresolved murder), and by failing to stand up to the image Benazir had nurtured of a leader, who shared the agony of the suffering masses, during the centuries worst flood, Zardari has lost whatever goodwill he had as the grieving widower three years after her life was snuffed out at Liaquat Bagh in Rawalpindi. By flying overseas on a pleasure trip when the nation was suffering the most, he had displayed a callousness of a commission agent. Gilani’s efforts at damage control were half-hearted to say the least. And the PPP has to pay the price in the near to medium term.

It is easy to brush aside the growing strains afflicting the Zardari government as mid-term blues that would only strain the nerves but not threaten to plunge the country into a mid-term election. Politics in Pakistan, like the Cricket Pakistan loves and plays is a glorious game of bribes and pay-offs, influenced as much by flowing beards, khakhi uniforms, Saudi Riyals and greenbacks and all that come along the way.

Nawaz Sharif, the businessman from Lahore, appears to read the writing on the distant wall. He had cut his political teeth under a military dictator, and, is of late trying to expand his base to Balochistan, while consolidating his position in Central Punjab and the old NWFP. This is clear from his frontal attack on Altaf Hussain of all places from Muzaffarabad. It was a speech in which he did not mention the ‘Kashmir movement’ even once though he blamed the martial law regimes for the Kashmir impasse, according to a despatch by Roshan Mughal in The Express Tribune.

Now back to the Bhitshah rally. The message was more than symbolic as it comes after MQM held similar exercises in Punjab in recent weeks. Altaf Hussain’s address from London to the rally was relayed on telephone. It was neatly packaged even while having the usual Altaf stamp of blitzkrieg on politics of corruption, nepotism and exploitation.

His call for the integration of the Urdu (21.1%), and Sindhi (59.7%)- speaking communities was rather impassioned. It coincided with the new stirrings amongst the Sindh people, who, though better placed than the Balochis (President Zardari is a Sindhi of Baloch origin), harbour a sense of deprivation of all political, financial and human rights.

One rally and one appeal don’t necessarily sway people anywhere. Certainly in the Sindh. But, politics in an emotionally surcharged atmosphere need a spark. So, the question is: will the Bhitshah rally prove to be the long in the works spark? The answer depends as much on the MQM as on the democratic and nationalist forces in the province of nation in eternal search of nationalism.