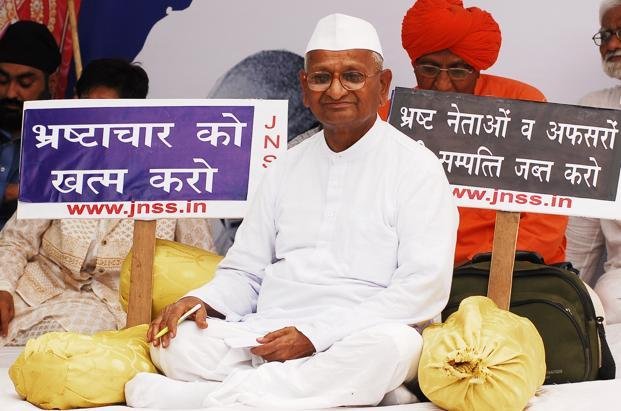 The contribution of Anna Hazare and his anti-corruption agitation in bringing BJP to power in 2014 was by no means small. He provided the initial momentum for the anticorruption movement in the country which the RSS/BJP cadres were able to turn into a whirlwind with blitzkrieg of verbal attacks by Narendra Modi on the then government. Anna was hailed as an anti-graft crusader par excellence.

The frail body of the septuagenarian Anna had shaken the rulers as people flocked in thousands to hear him. The government of the day would send emissaries of the cabinet rank to talk him out of his agitation. Today, he vainly struggles to be heard by the government. The harsh truth is that facing a stubborn government, he has not been able to resurrect his anti-graft crusader-cum-social reformer image of the past.

Anna Hazare is past the halcyon days of his glory. It will not be an exaggeration to say that in the last few years, coinciding with the ascendancy of the BJP, he has been relegated to the ranks of one of the many ‘social activists’; no more a figure feared by the rulers throughout the nation. The stage for his agitation has been confined to the courtyard in a temple in his village, Ralegaon Siddhi in Maharashtra’s Ahmednagar district; in earlier days it was the Ramlila Maidan in the national capital. Does anyone remember that in March last year he had sat on another fast at Ramlila Maidan in Delhi? It hardly noticed any crowd and it ended with a whimper, though he retreated by threatening to go on another fast.

His ‘indefinite fasts’ or threats of agitation for an ombudsman and remunerative prices for farmers begin and end without drawing much attention. Take the latest instance when he began his hunger strike on January 30 and ended seven days later: it hardly made headlines in the media. In fact, sections of the media almost ignored his fast.
True, the Maharashtra chief minister, Devendra Phadnavis, along with a central and state minister did call on him to urge him to give up his fast after the visiting team of ministers had promised to ‘fulfill’ his demands—ombudsman and a better deal for the distressed farmers. Actually, his demand for solving the farmers’ issue is quite specific: implement the Swaminathan Commission recommendations that seek to make MSP remunerative in real sense. Electoral reforms, especially curbing the role of money in polls, have also been among his major demands. There is an even lesser chance of these demands being met.

With the installation of the Modi-led government in May 2014 he had perhaps voluntarily withdrawn himself into the background, sure that the centre and the state governments would appoint post haste Lok Pal and Lok Ayuktas respectively to bring transparency and probity in governance.

Demanding the appointment of an ombudsman for the country, he had gone on a much publicized hunger strike in Delhi about eight years ago which ended only after the assurance that his wish would be fulfilled was conveyed to him by cabinet ministers. Soon afterwards the outgoing government passed the Lok Pal bill.

Then with the Modi government firmly in the saddle started the usual procrastinations. He waited through 2015 for Lok Pal to become a reality; he kept waiting through subsequent years but the Lok Pal remained a dream.

Anna Hazare should be ready for being taken for another ride by the government when it says that it will expedite the process of the appointment of the Lok Pal at the centre and Lok Ayuktas in the states where it has not been done. The NDA government has been in power for almost five years and yet it has failed to appoint a Lok Pal, hiding behind the excuse of non-cooperation by the Opposition Congress.

Anna should take a look at the way the government steamrolled its way into the appointment of a CBI director despite the ‘non-cooperation’ by the Opposition. Forget Lok Pal at the centre, many of the BJP-ruled states have failed to appoint Lok Ayuktas.

Some of the past and present observations of Anna Hazare may provide clue to why he seems to have lost his sheen. A day prior to beginning his January 30 fast, he had accused the BJP of ‘betrayal’ and having become ‘allergic’ to him after coming to power. He was also critical of Arvind Kejriwal’s decision to leap into active politics.

It was the same BJP, along with the RSS, that had helped fan his anti-graft movement. He has acknowledged that. Anna Hazare may be preparing himself for another ‘betrayal’ by the ruling party if the government fails to appoint a Lok Pal and Lok Ayuktas in all the states.

Since coming to power, the BJP has faced many allegations of corruption and cronyism and lack of transparency in governance. Of course, thanks largely to a friendly—if not pliant—media, the ruling party has kept up the façade of being a ‘clean’ party. But a Lok Pal, when appointed, may have to examine the allegations.

It was evident even at the peak of his India Against Corruption movement that Anna Hazare is given to hasty and summary judgements. He was an admirer of Narendra Modi, at least during his early years in office, and was also a supporter of his much-criticised ‘Notebandi’ (demonetization) in November 2016. Echoing the line of Modi, he had said that banning of Rs 500 and Rs 1000 currency notes would eliminate black money, corruption and terrorism.

It is not known if he said something about the devastating effects of ‘Notebandi’ on farmers and small and medium businesses. Again, his views on some of the controversial current issues, like the Rafale aircraft deal, are not known. As a crusader of probity and transparency he ought to have taken a stand and put pressure on the government to come clean. That is expected of an anti-graft crusader par excellence.