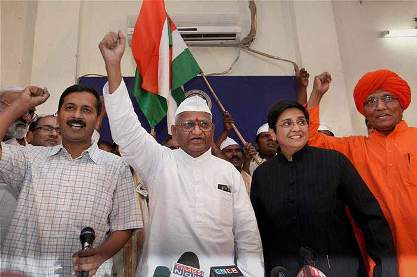 Anna Hazare, the crusader against corruption with his aides

New Delhi (Syndicate Features): He started as a person removed from politics and politicians and, hence, much respected. In less than six months after he awakened the nation to the extent of the spread of corruption, Anna Hazare seems to be shedding his non-partisan cloak. It was only the other day when he had stressed that his movement was against all politicians. who were complicit in spreading corruption in the country.
His message had electrified the whole country. It was so appealing that people were willing not to pay too much attention to his penchant for recommending death by hanging, or at least public flogging, of those accused of drinking. They did not object when he went about denigrating the entire class of politicians and called the prime minister a ‘liar’.

His insistence that his views on Jan Lokpal Bill (ombudsman) must be incorporated in the official bill was not met with any public outcry though some had said that it smacked of ‘authoritarianism.’ When he says that the Lokpal Bill must be passed in the coming winter session of parliament it is taken as his intention to keep the government on its toes, lest it sends the issue back to the cold storage as it has been doing for the last 42 years or so.

But now judging by some of the recent utterances by him and his two most prominent lieutenants, Messrs Kejriwal and Bedi, many are inclined to believe that he has tilted towards the Bharatiya Janata Party. Had it not been so, the RSS would not have openly claimed to back Anna. The BJP is the only political party working in support of the Team Anna even though it remains ambivalent on his ideas of the ombudsman.

The two key members of his team are widely suspected to have political ambitions of their own, which they hope to realise only if the Congress is kept out of power. It is safe to assume that the BJP will lead the next government should the Congress-led coalition face defeat.

The BJP adrenal has shot up after Anna specifically asked voters to vote against the Congress in the Hissar bye-election and during the ensuing five state assembly elections. His threat to go to the voters in UP to persuade them not to vote for Congress in UP is a morale booster for the BJP.

It should be made clear that Anna supporting a political party of his choice is no sin. What is bothersome is that in the opinion of many in the country the party he has chosen to back, at least indirectly, hardly meets the high moral standards for clean politics that Anna advocates. His tirade against the Congress will be widely acceptable if he could stay away from partisan politics.

His choice of giving a call against the Congress alone in a bye-election in Haryana either betrays his personal animus towards the Congress or a complete ignorance about the background of personalities and parties involved in that bye-poll. Likewise, he seems to have chosen to pretend not to know about the political reality in UP. The Congress, corrupt though it may be, has been out of power in the state for a long time and is not reckoned to be a serious contender. On the other hand, there are these ‘big two’ parties in UP which are at the centre of accusation of corrupt practices.

Other than the Congress candidate, a turn coat, the two other candidates in Hissar are not on a morally strong wicket to take on the fight against corruption. The record of their parties and their leaders has not been very inspiring if eradication of corruption is an important consideration.

Anna, a Maharashtrian, Arvind Kejriwal, whose hometown happens to be close to Hissar, and Kiran Bedi, originally from Amritsar, may not have any firsthand experience of politics in UP. But like everyone else they might have been able to gather that the ‘big two’ parties in that state happen to be BSP, which is in power, and SP, which is the second largest group in the state assembly and which was in power before the BSP trounced it. The Congress is generally considered to be number four in the state, behind the BJP, which has also been in power in UP.

The common perception of UP is that it is not only a poorly governed state but reeks with corruption and corrupt and immoral practices. Most people would be inclined to blame the ‘big two’ parties in the state for their failure to do much to stem the rot of corruption in the state, not that the BJP and the Congress rules in the state have been taint-free.

So, when Anna appeals to the voters in UP not to vote for the Congress whom has he in mind? The BSP, the SP or the BJP? He could not be speaking on behalf of un-attached ‘independents’ because he has blessed none of them. The inference will be that he is pleading for support to the BJP because of the loud support he receives from the BJP and its Hindutva Parivar.

A few months ago, Anna had raised a minor storm by praising the Gujarat chief minister, Narendra Modi, who is a BJP icon and aspires to be the next prime minister of India. Perhaps that would not be an issue if Anna and his Team had not been so consistently evasive on commenting on developments in Gujarat and Karnataka.

On the recent action by Modi against an IPS officer, all one heard was Kejriwal making some feeble noise against it. Anna does not like to take a stand on the corruption charges swirling around the BJP in Karnataka.

In his native Maharashtra, the jingoist outfits called Maharashtra Nav Nirman Sena and the Shiv Sena, both run by two different members of one family, frequently indulge in acts of hooliganism against North Indians who are accused of ‘exploiting’ the state. If Anna has a moral force he should employ it against such elements in his own state because like corruption, hooliganism is also a moral issue.

Anna is not doing himself or his movement a great service by being selective and partisan in his criticism.  (Syndicate Features)