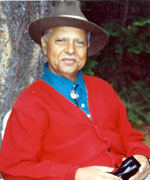 Bhau, as V S Kalchuri is addressed by Meher Baba lovers all over the world, has had the privilege of serving the Avatar of the age as His night watchman for years.

Believe it or not, Bhau underwent as many as 21 operations over the past three decades in particular but when you meet him , you will see a 83-year-old  young man, ever smiling, ever willing to listen to you, ever ready to answer your questions and  ever keen to take you on the long treck he had the privilege of undertaking in the company of the living Master. Age sits  on his shoulders very lightly and puts to shame people half his age.

Bhau Kalchuri is the only living Male member of the close resident circle, Mandali of  Meher Baba. He has authored several books. Most  important of these works is his ode to Meher Baba, the Lord Meher which chronicles  the story of the Avatar from birth and accounts for each and every day as leafs from a diary.

He is also the chairman of the Trust that looks after Meher Baba’s Tomb Shrine and other properties at  Meherabad and Meherazad. The Avatar Meher Baba Public Perpetual Charitable Trust has huge responsibilities. But it has no commensurate endowment.That puts a great responsibility on Bhau and takes lot of  his time.

Yet, Bhau makes it a point to chat with Meher Baba lovers every Sunday and address them at Meher Piligrim Centre every Monday and Friday.

Here hyper links are provided to Bhau chats. Listen and relive the glory of  Meher Baba.

Bhau’s chats are open to every one. If you have a question, put it to him. Benefit from his replies.

We begin here with the latest chat