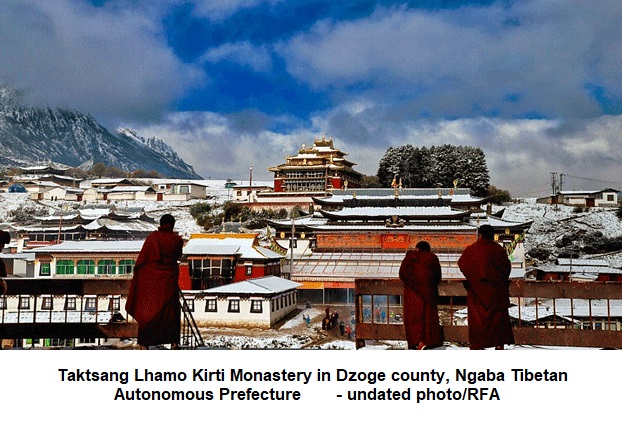 Chinese persecution against Tibetans continues to be harsh in the country by imposing crackdowns, sentences, killings, intimidation, and harassment of individuals who do not adhere to Beijing’s so-called policies.

According to Radio Free Asia, China has ordered leaders of two counties that are presently part of its Sichuan province to prevent the local Tibetans from honouring the exiled head Kirti Rinpoche of their most influential monastery, including by any kind of online posting, on his 80th birthday on August 8 shows the level of repression and lack of expression that Tibetans currently survive in Tibet.

Tibet Press reported that 60 years have passed since the Dalai Lama along with many Tibetans were forced to leave Tibet by China and became refugees in India.

However, recent efforts of China to Sinicize Tibet, its religion and identity are a threat.

China recognizes that Buddhism is the cornerstone of Tibetan identity and therefore, has been all-out efforts to diminish its importance, as per Tibet Press.

China claims to have “peacefully liberated” Tibet whereas it invaded the world’s rooftop and is still exerting control over it where it is committing gross human rights violations, reported TRC.

The religious repression in Tibet has intensified over the decades and China’s constant attack on Tibetans is part of the process of the complete Sinicization of the Himalayan region by Beijing.

Recently, in July, the China Buddhist Association, established in the year 1953, issued a notice stating, “Notice on the Boycott of Illegal Missionary Activities of Tibetan Buddhist Monks” in the Guangdong province, Choden Dolma wrote in Bitter Winter.

The main reason behind this notice was the growing dissatisfaction with the China Buddhist Association and they also invited independent Buddhist teachers and Tibetan monks from both historical Tibet and from overseas.

According to the author, calling Buddhist teachers did not go well with the Communist Party since it gave out hints of the formation of an independent Buddhist circle outside their grasp and power.

The notice claimed that “in recent years, the illegal mission of Tibetan Buddhist monks to the mainland has become more and more serious, which has seriously impacted the spread of Mahayana Buddhism, the righteousness of Buddhism and Chan Buddhism, and seriously affected the interests of believers, property safety, family safety and social harmony.

“The notice also issued claims regarding how some people tried to “pose as living Buddha to lure people for money and sex” by giving out false initiations to impart the Dharma and release believers.

Since China illegally occupied Tibet in the 1950s, the brutality of the Chinese Communist government on the people of Tibet started and turned the lives of the Tibetan people into a living hell.

The lack of basic human rights is also an issue that has been raised on every occasion to gain the attention that it deserves on international platforms. But sadly, it has never been considered a case worthy of being seriously taken up by organizations such as the United Nations.###