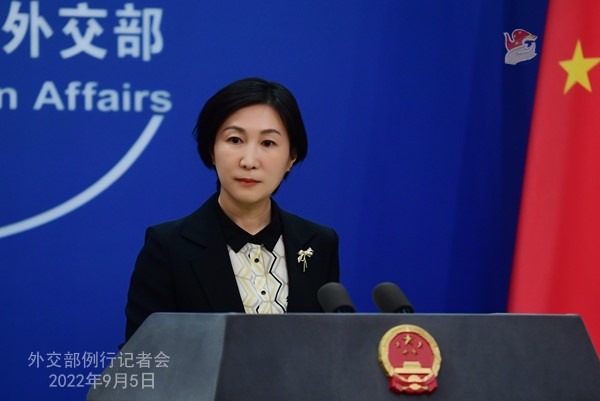 Xinhua News Agency: Kyrgyz President Sadyr Zhaparov talked about his understanding of the Communist Party of China (CPC) in a recent interview. He said, “If a party is driven by selfless goals, striving for the common good, prosperity, well-being of the people, then such a party will always be supported by its people.” The President also spoke highly of the development of relations between Kyrgyzstan and China since the establishment of diplomatic ties 30 years ago. He also expressed readiness to advance cooperation with China in such fields as green development, innovation and digital economy. Do you have any response to these remarks?

Mao Ning: As you quoted, President Zhaparov said in his interview that a party striving for the well-being of the people will always be supported by its people. This is very true. A Harvard University survey among the Chinese people spanning over a decade found that more than 90 percent of respondents are satisfied with the Party and their government. In 2021, as many as 91 percent of Chinese interviewed by Edelman, a top global public relations consultancy firm, said they trust their government, the highest recorded all over the world for years running. These numbers fully support President Zhaparov’s observation. The CPC has the overwhelming support of the people because it puts the people front and center and because it is firmly committed to pursuing happiness for the people and rejuvenation for the nation.

Bloomberg: I have two questions regarding the television interview with the Chinese Ambassador to Australia Xiao Qian, who gave an interview with ABC Australia yesterday. The first one is that the Ambassador said that he’d welcome a meeting between the Chinese and Australian leaders under the right conditions. So, my question to the foreign ministry is what are those conditions? What constitutes the right conditions? My second question in relation to the same interview is that the Ambassador said that the CPC has broad support in China. What is the metric for showing that?

Mao Ning: On your first question, the sound and steady development of China-Australia relations is in the shared interest of both countries and peoples and conducive to peace, stability, development and prosperity of the Asia-Pacific region. China stands ready to follow the principle of mutual respect and mutual benefit and work with Australia to steadily advance bilateral relations along the track of comprehensive strategic partnership and bring benefits to the two peoples. As for a meeting between the leaders, I have nothing to share.

On your second question, in my reply to the previous journalist’s question, I mentioned some figures from surveys conducted by institutions in the West, which found that more than 90 percent of Chinese respondents are satisfied with the Party and their government. In 2021, as many as 91 percent of Chinese interviewed said they trust their government. This is rarely seen in the world and fully shows that the CPC has the broad support of the Chinese people.

Beijing Youth Daily: It is reported that the US Department of Defense released a new space policy document which recognized space as a “priority domain of national military power” and vowed to enhance the US’s space capabilities to defend against “hostile” use of space. The policy paper also said the US will step up military cooperation with allies to jointly promote “norms of behavior for responsible space activities” and provide a durable strategic advantage for the US and its allies. Do you have any comment?

Mao Ning: For a long time, the US has openly defined space as a war-fighting domain. It has built the US Space Force and Space Command, developed and deployed space-based offensive weapons, conducted offensive and defensive military exercises and technology tests, and intensified military cooperation with its allies. All this has heightened the risks of military miscalculation and conflict. Also, the US has been stonewalling China and Russia’s space arms control initiative and obstructing negotiation for a legal instrument on arms control in space. In 2017, due to the sole opposition of the US, the UN Group of Governmental Experts on the Prevention of an Arms Race in Outer Space was unable to conclude a report.

The new document on space policy released by the US Department of Defense recognizes space as a priority domain of national military power, further aggravating the trend of turning outer space into a weapon and a battlefield. It poses a grave challenge to the peace and security of outer space, blatantly tramples on the international consensus on peaceful use of outer space, and fully exposes the US ambition of increasing military build-up and war preparedness and seeking dominance in outer space. The US is in no position whatsoever to talk about so-called “norms of behavior for responsible space activities”.

The US should respect the shared concerns of the international community, immediately stop the negative moves that could undermine security of outer space, step up to its due responsibilities and stop hindering negotiations for a legal instrument on arms control in outer space.

Shenzhen TV: We noted that German chemical giant BASF held a ceremony yesterday to mark the full construction of its Zhanjiang Verbund site in Guangdong and the inauguration of its first plant of the site. What’s your comment?

Mao Ning: Yesterday, a ceremony was held by BASF to inaugurate its Zhanjiang Verbund site in Guangdong. The ceremony was attended by Han Zheng, Member of the Standing Committee of the Political Bureau of the CPC Central Committee and Vice Premier of the State Council. With a total investment of about 10 billion euros, the site is the largest single investment project by a German enterprise in China. The inauguration of the project is of important significance for deepening China-Germany trade and investment cooperation and for the two countries’ efforts to jointly address the impact of COVID-19 and keep the industrial and supply chains of the global petrochemical industry secure and stable.

The continued growth of German investment in China since the beginning of this year is evidence that German businesses are optimistic about China’s economic prospects and business environment and fully confident in investing and operating in China.

China stands ready to work with all countries to enhance economic, trade and investment cooperation and grow an open world economy.

The Paper: Deputy Spokesperson of the US State Department Vedant Patel said during a press briefing on September 6 that the US’s latest arms sales to Taiwan are for defensive purposes and there is no reason for China to react. Do you have any comment on this?

Mao Ning: China has always been unequivocally against the US’s military contact with Taiwan and arms sales to Taiwan. Taiwan is a province of China. There is no such thing as “defense for Taiwan”. US arms sales to China’s Taiwan region violate the US’s political commitment in the three China-US joint communiqués, especially the August 17 Communiqué. By selling arms to Taiwan, the US is supporting and conniving at “Taiwan independence” and creating new factors that could lead to tensions in the Taiwan Strait. The US side needs to strictly abide by the one-China principle and the provisions of the three China-US joint communiqués and stop using Taiwan against China. China will act resolutely in response to acts that undermine China’s sovereignty and security and interfere in China’s internal affairs.?

Hubei Media Group: The earthquake that recently struck Luding County, Ganzi Tibetan Autonomous Prefecture of Sichuan Province has caught international attention and many countries have expressed sympathies to China. What is the foreign ministry’s comment on this??

Mao Ning: Since the earthquake hit Luding, Sichuan on September 5, Russia and many other countries have extended their sympathies to China through various means, and expressed readiness to offer support and assistance for quake relief. We truly appreciate their gesture.

The Chinese government is doing everything necessary for the quake relief. Teams specializing in various types of rescues have rushed to the sites. Operations are in full swing to search for the missing, save and treat the injured, look after the affected and urgently restore infrastructure in the quake-stricken areas. We have the confidence to prevail over the disaster and rebuild homes for the local people.