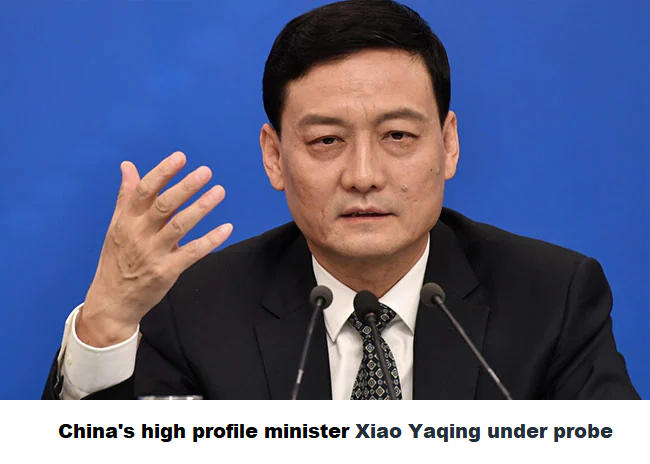 China’s Minister of Industry and Information Technology, Xiao Yaqing, is under the lens for allegedly violating discipline and the law.

Xiao Yaqing is currently a member of the 19th Central Committee of the Communist Party of China, the secretary and minister of the party group of the Ministry of Industry and Information Technology, and the director of the State-owned Assets Supervision and Administration Commission of the State Council and the deputy secretary of the party committee.

He has studied and worked in China’s non-ferrous metals industry for nearly 30 years. He graduated from Zhongnan Mining and Metallurgical Institute, served as the first chairman of Southwest Aluminum, and became the general manager and party secretary of China Aluminum Corporation in 2004.

Hong Kong’s Sing Tao Daily said that during Xiao Yaqing’s tenure, China’s aluminum industry developed and grew, and later served as deputy secretary-general of China’s State Council, in 2016 he became the director of the State-owned Assets Supervision and Administration Commission of the State Council, promoted to the ministerial level, three years later changed to the director of the State Administration for Market Regulation, and in 2020 he was transferred to the minister of industry and information technology.

The list of delegates to the 20th CPC National Congress of the CPC Central Committee and state organs just released by The Chinese state media includes almost all the top leaders of the central ministries and commissions, except for Xiao Yaqing, triggering speculation about his future.

Also under probe is the head of a high-profile state-backed semiconductor fund. Ding Wenwu, general manager of the National Integrated Circuit Industry Investment Fund Co. Ltd, is suspected of “serious violation of discipline and law,” the Central Commission for Discipline Inspection said in a statement Saturday, without elaborating. The CCDI is China ’s top anti-graft watchdog.

Ding, 60, is currently undergoing a disciplinary review by an inspection team dispatched by the CCDI to the Ministry of Industry and Information Technology, according to the statement.

An investigation also started against Zhao Weiguo, who had served as the chairman of blue chip, Tsinghua Unigroup before the company collapsed under a mountain of debt###