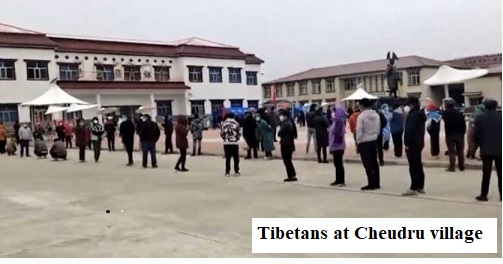 After the mass protest against China’s Zero Covid policy, Beijing took a U-turn and loosened up its strict restriction only to use them as a tool to kill and eradicate the Tibetans from Tibet, as per the Voice Against Autocracy.

According to the latest report, 100 people alone have died in Lhasa due to Covid since Beijing lifted its strict policy restrictions, Voice against Autocracy reported citing Radio Free Asia. Beijing main’s plan is to kill the Tibetans and bring misery to families.

Interestingly, China has opened its all boundaries, allowing its citizens to travel and its tourism department announced that on January 1, 2023, a new round of its Winter Tour campaign to Tibet attracts more than 10 million Chinese from China. This package includes free tickets to Lhasa’s Potala Palace and other major sites in Tibet and will run till March 13.

China’s President Xi Jinping’s covid policy that was implemented in territories under the PRC, there was a clear non-indifference in its application, especially in the occupied territories of Tibet, Voice Against Autocracy reported.

Videos circulating on social media shared by Tibetans showed how even in the big cities of Lhasa and Shigatse there was a lack of staff, food, medical consumables and infrastructure. The ground situation in Tibet which saw Tibetans pushed to take their lives was validated when the mayor of Lhasa publicly apologized for the administrative handling even though the blame must solely lie with president Xi Jinping who remained staunch even after witnessing the failures of his covid policy.

Tibetans through their social media platform had shared their inhumane situation in Tibet in light of the quarantine and others measures enforced due to president Xi’s Magnus opus policy (zero-covid).

And still, China did not accept the fact and even declined help from foreign nations including the sending of vaccines is totally ridiculous. This action and gesture by China, the CCP and its leader Xi Jinping clearly indicate to us that they do not care and revere the lives of the Chinese and other nationalities but give more impetus towards its reputation, reported Voice Against Autocracy.

China had witnessed a huge protest in the past few months. The protest started after the Urumqi incident. Even China saw the protest by the workers in the Apple factory in Zhengzhou city protesting against the unpaid wages and forced application of strict surveillance in light of the zero-covid policy. – Beijing Bulletin