The presence of BRP Sierra Madre, a rusty World War II landing ship tank that serves as a military outpost, on Ayungin Shoal has served as a foil against China ’s attempt at having full control of it, according to the Philippine Daily Inquirer. 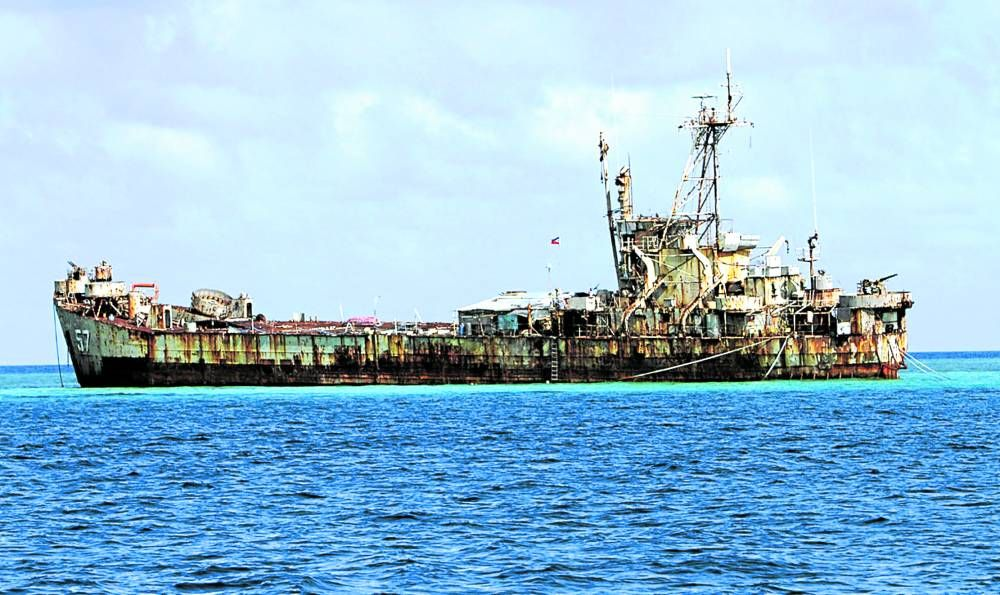 “[The challenge is] sustaining our (Philippines) presence there and making sure China knows that we are serious about keeping it,” Jay Batongbacal of the University of the Philippines Institute for Maritime Affairs and the Law of the Sea told the Inquirer.

The Philippines Foreign Office on Friday (June 10) accused Beijing of “illegal fishing” and blocking Philippine boats on a resupply mission using fishing nets and buoys near the shoal, a low-tide elevation located 194km off Palawan that is within the Philippines’ Exclusive Economic Zone (EEZ).

“China has no right to fish, monitor or interfere with the Philippines’ legitimate activities there in,” it said as Manila lodged a Diplomatic protest with Beijing on “recent incidents” in Ayungin Shoal.

The diplomatic note came a day after it protested the presence of more than 100 Chinese militia vessels around Julian Felipe (Whitsun) Reef, also located within the Philippines’ EEZ.

According to the Manila daily, two resupply boats escorted by BRP Cape Engaño of the Philippine Coast Guard (PCG) were blocked on April 22 by fishing nets and buoys set up by the Chinese as they neared the eastern entrance of Ayungin Shoal—their usual route to BRP Sierra Madre, a rusty World War II landing ship tank that serves as a military outpost.

Two China Coast Guard (CCG) vessels and four militia vessels were already in the area when they arrived, said a senior security official who spoke to the Inquirer on condition of anonymity.

A CCG vessel then deployed one of its rubber boats and approached the Philippine vessels.

“Follow me,” the Chinese personnel on board the rubber boat said over marine band radio, as it ushered the Philippine vessels toward the northern entrance of the shoal. The PCG ship could no longer join because of shallow waters, the official said.

The Philippine boats had no choice but to go along and the resupply mission was completed after a few hours.

These recent Chinese activities on Ayungin Shoal appeared to test the Philippines’ resolve to keep its foothold there.

“They will make it clear that Philippine vessels will not be able to approach BRP Sierra Madre without their escort or permission, and that at any time, they can be prevented from reaching her. So if we act the way they expect us to, we lose,” Batongbacal said.

China’s use of fishing devices to prevent the Philippines to carry out a resupply mission in Ayungin was also the first time, at least publicly, that it tried to do such an act in the area.

“The nets/ buoys can entangle a Philippine vessels’ propellers and effectively disable its propulsion. This endangers the vessel and its crew. They will have to seek assistance from another vessel if they are adrift and unable to move,” Batongbacal said.

The Philippines should “cut, remove and confiscate” the devices as these endanger the safety of navigation.

“They don’t have a right to fish there, it’s under our jurisdiction per the South China Sea arbitration, so if they interfere forcefully, they are the aggressors,” the maritime expert said.

The situation in Ayungin is a “cabbage strategy in play,” Batongbacal said, referring to tactics in changing the status quo by layers or a series of small steps.

“What we’re seeing is how China is literally squeezing us out of the Ayungin, similar to the way they squeezed us out of Scarborough,” he said, recalling the long standoff between Manila and Beijing in Panatag Shoal or Scarborough in 2012, which ended with China ’s control of the feature.

It is the presence of BRP Sierra Madre that prevents China from having full control of Ayungin.

“The fact that we are still there is evidence that they do not yet fully control the area. That’s why they want us to leave,” Batongbacal said.

China, he said, was focused on Ayungin because it was the “most vulnerable” out of the nine detachments occupied by the Philippines in the Kalayaan Island Group (Spratly Islands) for these reasons: “small contingent; entirely dependent on outside support; not that easy to get to; requires the least effort to kick the occupants out.”

These factors are exacerbated by the decaying state of the rusty naval outpost, which looked as if it could break apart anytime.

“Either we repair or replace it, if we want to maintain our position there. The risk will be that China will do what it can to try to prevent us from reaching it,” Batongbacal said.

“If we don’t show determination, over the next few years they will do the same thing to each and every island we occupy,” he said.

The April 22 incident was earlier tracked by Washington-based think tank Asia Maritime Transparency Initiative (Amti), although not all vessels involved were detected through its automatic identification system.

Amti also reported another incident where CCG and militia vessels closely pursued a Bureau of Fisheries and Aquatic Resources ship on its way to Ayungin, several hours before the resupply mission.

The Chinese Embassy in Manila, in response to requests for comment on the Diplomatic protest, cited two news articles from 2021 and 2022 with Defence Secretary Delfin Lorenzana describing the situation in the West Philippine Sea as “quiet and stable.”

An international arbitral tribunal ruled in 2016 to invalidate Beijing ’s fictitious claims within its so-called nine-dash line, but Beijing refuses to recognise the ruling.

In November, the Philippines aborted a resupply mission after CCG ships blocked and fired water cannons on resupply boats en route to BRP Sierra Madre. It resumed the mission after a few days, with a reassurance from China that it will not interfere.

These types of incidents pose a challenge to President-elect Ferdinand Marcos Jr, whose recent statements suggest that he will pursue stronger ties with China without compromising the country’s sovereignty, as he assumes the presidency at the end of the month.

Marcos Jr recently said he would talk to China with a “firm voice” and would not allow Philippine rights to be “trampled upon,” but also called Beijing the country’s “strongest partner” in pandemic recovery.