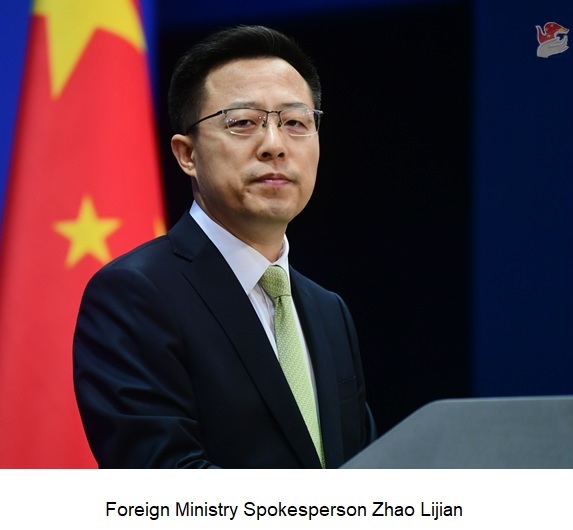 Phoenix TV: Principal deputy spokesperson of the US State Department said when answering a question related to the situation across the Taiwan Strait that China has overreacted and has made provocations, whereas the United States’ response has been defense ministry?“measured and responsible”. Do you have any response to this??

Zhao Lijian: The context, cause and course of events that led to the current tensions in the Taiwan Strait are crystal clear. The US made the provocation first, and China was compelled to take legitimate countermeasures, which are justified, lawful, necessary and proportionate. It is the US that breached its commitment to one-China and undermined China’s sovereignty and territorial integrity, yet it accused China of overreacting. It is the US that has frequently sent warships to flex muscles in waters off China’s coast in the name of freedom of navigation, yet it accused China of making provocations. This is confounding right with wrong. China will not accept it, nor will the international community endorse it.?

What?the US needs?to?do?is?to stop fudging, hollowing out and distorting the one-China principle, abide by the basic norms in international relations including respecting other countries’ sovereignty and territorial integrity and non-interference in their internal affairs, and return to the three China-US joint communiqués and the one-China principle, instead of shifting responsibilities, blaming the innocent party and attempting to create an even bigger crisis.?

MASTV: NATO Secretary General Jens Stoltenberg said a?few?days?ago?during a visit to Canada that Russia and China’s cooperation in the Arctic is not consistent with NATO members’ interests and that NATO will expand presence in the region. Russian presidential press secretary Dmitry Peskov said that Russia considers Stoltenberg’s words on the necessity of NATO’s expanded presence in the Arctic as its intention to confront Russia in this region. What’s your comment?

Zhao Lijian: The?words?of?Mr.?Peskov?are?well?put.?NATO’s wanton assertion that China-Russia cooperation challenges NATO values and interests once again exposes its attempt to export the Cold War mentality and replicate bloc confrontation. NATO needs to immediately discard its dangerous thinking and approach that could destabilize the world.

The natural conditions of the Arctic and their changes have a direct impact on China’s natural environment and Chinese people’s work and life. China is closely involved in the trans-regional and global issues in the Arctic such as environmental protection, climate change and sustainable development. This is an undeniable geographical, natural and social reality. China respects the sovereignty, sovereign rights, and jurisdiction of the Arctic States in this region, and actively conducts international cooperation with various parties to protect the environment and promote sustainable development in the Arctic guided by the basic principles of “respect, cooperation, win-win result and sustainability”.?

The Paper: According to reports, famous Japanese entrepreneur and founder of Kyocera Kazuo Inamori passed away in Kyoto on August 24. Mr. Inamori visited China many times and also enjoyed great popularity in China. What is China’s comment on this?

Zhao Lijian: The Chinese side mourns for the passing of Mr. Kazuo Inamori and expresses condolences to his family. Mr. Kazuo Inamori was a world-renowned entrepreneur. He made positive contribution to Japan’s economic, scientific and cultural advancement, and the friendly exchange and cooperation between China and Japan. China and Japan share close contact and deeply entwined interests in various areas. We hope all sectors of the two sides can work together, continuously deepen exchange and cooperation, and promote sound and steady development of China-Japan relations.

CCTV: We have learned that Ambassador Xu Jinghu, Special Representative of the Chinese Government on African Affairs, will be leaving office. Who will be assuming the post?

Zhao Lijian: The Chinese government has appointed Ambassador Liu Yuxi to succeed Ambassador Xu Jinghu as the Special Representative of the Chinese Government on African Affairs.

During her time in office, Ambassador Xu Jinghu worked diligently to promote China-Africa friendship and practical cooperation in various fields, maintained good communication with various parties in the international community on issues concerning Africa, and made important contributions to developing China-Africa relations and deepening understanding of China-Africa cooperation.

Ambassador Liu Yuxi is a veteran diplomat well-versed in African affairs who once served as the Chinese Ambassador to Togo and the Head of Mission of China to the African Union. He stands ready to establish close working relations with various sides, further deepen exchange and cooperation between China and African countries and regional organizations, and make strong efforts to advance peace and development in Africa and deepen China-Africa friendship.

Reuters: Former USSR leader Mikhail Gorbachev passed away yesterday prompting a strong reaction on Chinese social media platforms. News of his passing was the most followed issue on Weibo for example. Does the foreign ministry have any comment?

Zhao Lijian: Mr. Mikhail Gorbachev made positive contribution to the normalization of relations between China and the Soviet Union. We mourn his passing and extend our condolences to his family.

Phoenix TV: Malaysia’s former Prime Minister Mahathir Mohamad said recently that China was a “big market” for Malaysia and ASEAN and maintaining that economic relationship was crucial. He said that China’s philosophy was not to occupy nations and urged ASEAN countries to move closer to China and stay away from others’ provocation of China. Do you have any comment??

Zhao Lijian: I have noted relevant reports. I also heard that Mr. Mahathir Mohamad had contracted COVID-19. We wish him a speedy recovery.?

Since the establishment of dialogue relations over 30 years ago, China-ASEAN relations have stayed ahead in many areas. The two sides have been standing together in solidarity to fight COVID-19. The economic cooperation and trade have thrived. Security cooperation has been making steady progress. Our cooperation has yielded many good outcomes and highlights. China and ASEAN are each other’s largest trading partners. From January to July this year, two-way trade totalled $544.9 billion, up by 13.1% year on year, delivering tangible benefits to the two billion people on both sides. China always advocates developing inclusive partnerships not targeting any third party and opposes forcing other countries to pick sides. Countries outside the region should earnestly respect regional countries’ interests and desire and make the Asia-Pacific a large arena for mutually-beneficial cooperation instead of a wrestling ground for zero-sum rivalry.

Reuters: Japan said on Wednesday that it will develop and mass produce a cruise missile and high-velocity ballistic missile as it seeks the ability to strike more distant targets as part of a military expansion aimed at meeting threats from China and Russia. China was mentioned in the procurement plan unveiled in the Ministry of Defence’s annual budget today. Does the foreign ministry have any comment on that?

Zhao Lijian: I answered a relevant question yesterday and you may refer to that.?

Beijing Youth Daily: According to reports, Republican Arizona Governor Doug Ducey has arrived in Taiwan, and will meet Tsai Ing-wen and Joseph Wu, participate in activities of the business community and meet with representatives of the semiconductor sector in Taiwan. What is your comment on that?

Zhao Lijian: There is only one China in the world. Taiwan is an inalienable part of China’s territory. China firmly rejects any official interaction between the US and Taiwan in any form and in any name. We urge relevant parties in the US to abide by the one-China principle and the provisions of the three China-US joint communiqués, stop all forms of official contact with Taiwan, and stop sending wrong signals to “Taiwan independence” forces. China will take strong measures to resolutely defend national sovereignty and territorial integrity.

Bloomberg: The Taiwan Army Chief of Staff has said that the Javelin anti-tank missiles that Taiwan has ordered from the US are now in the production and delivery stage. My first question would be, do you have any comment on this update on the status of the anti-tank missiles? And separately, the Taiwan military has said that it plans to increase an order of the HIMARS rocket system, increasing the number from 11 to 29. That’s according to a report from a news agency in Taiwan. Does the foreign ministry have any comment on this increase in rocket systems?

Zhao Lijian: I noted relevant reports. Let me just say that the Taiwan authorities’ attempt to seek independence by soliciting US support will lead nowhere.

MASTV:?In April, US Republican?Senator Lindsey Graham openly asked the Taiwan authorities to buy 8 billion worth of Boeing 787 planes during?his?visit?to?Taiwan. Recently,?news?agencies?in Taiwan reported that Taiwan’s China Airlines will buy Boeing airplanes?which?means that the Taiwan authorities lapped up the deal peddled by Graham. Do you have any comment??

Zhao Lijian: Certain US politicians use Taiwan visits as a money generator and make an exorbitant ask to the Taiwan authorities. This is hardly news. The DPP authorities have been squandering the hard-earned money of the people in Taiwan and have been reduced to an ATM for US politicians to seek selfish gains.?

Reuters: Solomon Islands on Tuesday said that it would be suspending entry into its waters for foreign navy ships pending adoption of a new process for approval of port visits. This is an attempt to better police its Exclusive Economic Zones. Does the foreign ministry have any comment on this decision?

Zhao Lijian: Solomon Islands is a sovereign country. It has the right to make its own decisions.?

AFP: Today, Michelle Bachelet ends her mandate as the UN High Commissioner for Human Rights and she has not yet released the report on the human rights condition in Xinjiang. How does China view her work? Is China satisfied that she hasn’t released the report?

Zhao Lijian: The post of the UN High Commissioner for Human Rights is very important and comes with great responsibilities. China believes in the importance for anyone in that position to adhere to the purposes and principles of the UN Charter, strictly observe the mandate of the UN General Assembly, work under the principles of impartiality, objectivity, non-selectivity and non-politicization, advance all types of human rights in a balanced way, engage in dialogue and cooperation with member states and oppose the wrong practice of politicizing human rights and double standards.?

Today, August 31, is Ms. Bachelet’s last day in office. As to the Xinjiang-related report you mentioned, China has made clear its stern position on many occasions. We firmly oppose the release of a so-called Xinjiang-related report by the Office of the High Commissioner for Human Rights. The report is a pure stunt orchestrated by the US and a handful of other Western countries. We hope the High Commissioner will make the right decision.?

Reuters: A Taiwanese defense official told reporters at a news briefing that for aircraft and ships that enter Taiwan sea and air territory, the national army, referring to Taiwan national army, will exercise right to self-defence to counterattack without exception. The same defense official said the same right to counterattack Chinese drones would apply. Does the foreign ministry have any comment?

Zhao Lijian: Let?me?start?by?saying?that?Taiwan?is?a?province?of?China?and?it?does?not?have?a?“defense ministry”.?The act of the Taiwan authorities to heighten tensions does not mean anything.

Bloomberg: I want to ask about a report that came out on Tuesday by US cyber security firm Proofpoint. In that report, the company alleges that a Chinese hacker group that has links to the Chinese government was behind an email fishing campaign that targeted energy projects in the South China Sea among other projects and government agencies. Do?you?have?any?comment?

Zhao Lijian: The firm you mentioned has no professionalism or credibility to speak of. Recently, it has frequently collaborated with the US government to systematically spread disinformation on the so-called “China hacking attacks”, serving as the “white gloves” of the US government. We believe the international community has its own judgement on the firm’s real intention.?