Dozens of scholars have accused the UN human rights chief of having ignored or contradicted academic findings on abuses in Xinjiang with her statements on the region. 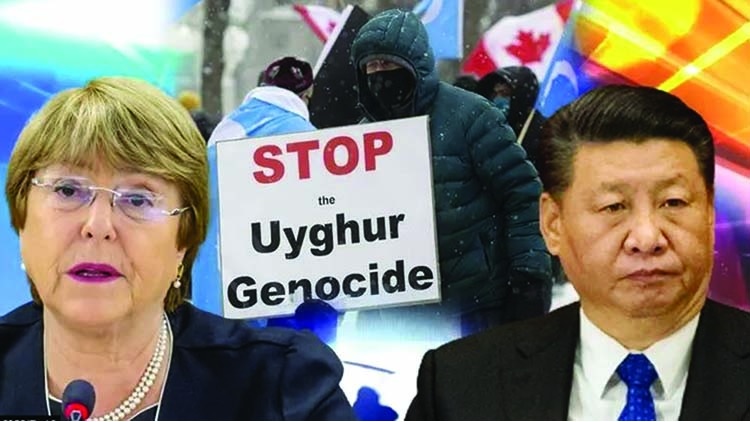 In an open letter published this week, 39 academics from across Europe, the US and Australia called on Michelle Bachelet to release a long-awaited UN report on human rights abuses in China, news agencies report.

The letter, published online, included some academics with whom Bachelet had consulted prior to her visit to Xinjiang. The letter’s signatories expressed gratitude for this, but said they were “deeply disturbed” by her official statement, delivered at a press conference in Guangzhou at the end of her six-day tour.They said her statement “ignored and even contradicted the academic findings that our colleagues, including two signatories to this letter, provided”.

“It is rare that an academic field arrives at the level of consensus that specialists in the study of Xinjiang have reached,” the letter said. “While we disagree on some questions of why Beijing is enacting its atrocities in Xinjiang, we are unanimous in our understanding of what it is that the Chinese state is doing on the ground.”

Xinjiang is the site of a years-long crackdown by Chinese authorities on Uyghurs and other Muslim minorities, with sweeping hardline policies of religious, cultural, linguistic and physical oppression.

An estimated one million people have been incarcerated in a vast network of detention and reeducation camps, which Beijing terms “vocational education and training centers”. Document leaks have revealed countless others have been arrested or jailed for alleged crimes including studying scripture, growing a beard, or travelling overseas, and that authorities have established “shoot to kill” policies in response to attempted escapes.

Rights organizations and several governments have labelled the campaign a genocide or crime against humanity. Beijing denies all allegations of mistreatment and says its policies are to counter terrorism and religious extremism.

At the end of her visit Bachelet said she had urged the Chinese government to review its counter-terrorism policies in Xinjiang and appealed for information about missing Uyghurs. She was quickly criticized by some rights groups for giving few details or condemnation of China while readily giving long unrelated statements about US issues in response to questions from Chinese state media. The academics’ letter is among growing criticism of Bachelet for not speaking out more forcefully against Chinese abuses after her visit, as well as a continued failure to release the UN report, which is believed to have been completed in late 2021. On Wednesday dozens of rights groups, predominately national and local chapters of organizations associated with Uyghur and Tibetan campaigns, demanded her resignation.

“The failed visit by the high commissioner has not only worsened the human rights crisis of those living under the Chinese government’s rule, but also severely compromised the integrity of the Office of the High Commissioner for Human Rights in promoting and protecting human rights globally,” the statement said.They also decried that she had repeatedly referred to the detention camps in Xinjiang by the Chinese government’s preferred term: “vocational education and training centres”.

The signatories said Bachelet had been “entirely silent on the human rights crisis enveloping Tibet” during her four years in office, and had “grossly underplayed the crackdown” in Hong Kong.It also called for the urgent release of the UN report.

“The repeated, open-ended, and unexplained delays call into serious question the credibility of her office to fulfil its mandate,” the statement said. (Courtesy: Daily Asian Age, Dhaka)