Pakistan intelligence agencies have instructed its units all over the country to constantly keep a watch on the activities of Hizb-ut-Tahrir and other religious outfits such as Sunni Tehreek, Tabligh Jamaat and Dawat-e-Islami to thwart their possible penetration in Pak Army ranks. Reports published in the Pak press reveal that these outfits are barred from holding any kind of activities inside the cantonment areas. Even the preaching groups have been warned not to distribute printed literature or pamphlets within the cantonment boundaries. The action followed the Army’s confirmation that it had detained Brig. Ali Khan and four other officers for their links with Hizb-ut-Tahrir.

On May 15, suspected Hizb-ut-Tahrir militants distributed hundreds of leaflets in the Rawalpindi cantonment, which is the headquarters of the Pak Army. The leaflets accused the army of selling out to the US and called upon “honest officers” to rise against the military.   British Press reported in July 2009 that Islamabad police had arrested 35 members from whom banned literature; computers, mobile phones and 15 cars were recovered.  In May, 2009, Colonel Shahid Bashar was arrested along with a retired PAF fighter pilot Squadron Leader turned lawyer Nadeem Ahmed Shah and a US educated mechanical engineer and a Green Card holder Awais Ali Khan.

Pakistan government was also alarmed by a senior Hizb-ut-Tahrir leader’s revelation that many activists had been sent to Pakistan to bring about Sharia ‘by force ’ and that his outfit had converted four Pakistani army officers during their training at military academy in Sandhurst in England.

Hizb-ut-Tahrir (Party of Liberation) is a radical political group dedicated to re-establishing an Islamic Caliphate across the Muslim world.  Active in Britain, it is banned in many Muslim countries for its calls to overthrow sitting governments.  The Pakistan government had slapped a ban on the outfit in 2004 following its plot to assassinate former President Pervez Musharraf. However, the Multan bench of the Lahore High Court overruled the proscription orders in 2005, following the plea by Hizb-ut-Tahrir that it is non-violent. 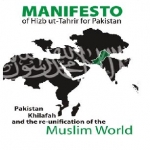 But, paradoxically, the outfit still figures on the list of the banned organizations that the Punjab government had issued in 2008.  Imtiaz Gul, author of the ‘Most Dangerous Place’ and Director of Centre of Research Studies, Islamabad, says, “This also partially explains the lack of coordination and the state of confusion that accompanies governance at the central and provincial levels.”

Since the outfit is banned in Pakistan, it uses the internet for outreach, publishing a wide range of e-books, websites and videos in both English and Urdu. Writing in the Friday Times, Columnist Zia-ur-Rahman says that Hizb-ut-Tahrir’s former global leader, late Abdul Qadeem Zallum from Palestine considered Pakistan as an important future stronghold and a strategic base after the country went nuclear in 1999.  He also asked the party workers of Pakistani origin to return to the home country, organise the group in the country with influencing the military and recruiting senior officers as their prime motive. 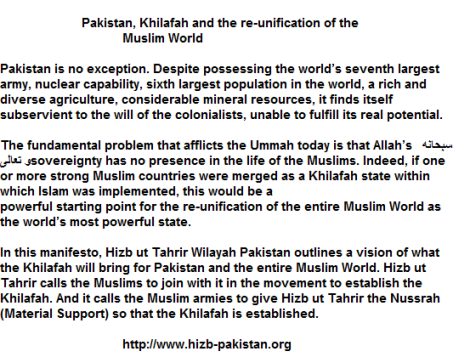 Tayyib Muqeem, Naveed Butt and Imran Yousafzai are the prominent leaders of the outfit’s Pakistan chapter. Shahzad Sheikh, official spokesman of the Hizb-ut-Tahrir in Karachi openly admitted how members were actively persuading the army to instigate a bloodless coup against the present government.  The outfit is organized in small cells of five to six members.  The organization claims that it has over one million members worldwide. Financial support to the outfit for carrying out operations in Pakistan mostly comes from the UK chapter. The group targets educated people and professionals such as journalists, teachers, bureaucrats, engineers, besides army officers.

In the past, many retired and serving armed forces personnel have been involved in acts of terrorism. In the mid 1990s, a group of officers led by Major General Zaheer-ul- Islam Abbasi and  Brigadier Mustansar had been busted as it was planning to stage a coup against the then Prime Minister Benazir Bhutto. Later Captain Farooq, one of General Musharraf’s security officers was arrested and retired after it was detected that he is member of Hizb-ut-Tahrir.  In January 2005, a military court sentenced three air force officers to two to nine years for their alleged links with the Jaish-e-Mohammad. In September that year, another military court sentenced Major Adil Qudoos, Colonel Abdul Ghaffar and Colonel Abbasi to different terms on charges of indulging in activities that conflicted with their duties. The authorities could not prevent the attacks on the GHQ in October 2009 and May 22, 2011 attack on PNS Mehran- which were the work of all insiders, raising concerns about radicalization within the army.

Commenting on the activities of Sunni Tehreek and Dawat-e-Islami, columnist Ashraf Javed says both are Barelvi organisations with hundreds of thousands of followers across the country.  While Sunni Tehreek recently took part in several political movements and is reportedly involved in sectarian violence, Dawat-e-Islami is just restricted to Islamic teachings.  But the intelligence agencies have warned that “its growing influence in the armed forces will have serious implications”. The Express Tribune quoted an intelligence report that over Rs. 20 million were collected from the Pakistan Air Force for the organization during this Ramzan.

Dawat-e-Islami was founded by its present charismatic leader Ilyas Qadri in 1980 and was created as a reaction to Tabligh Jamaat which has established its network all over the world.  In October every year, it holds the biggest congregation in Multan rivalling the one held by Tabligh Jamaat in Raiwand near Lahore.  It may be mentioned that Mumtaz Qadri, the policeman who killed the Punjab Governor Salman Taseer, was a follower of Dawat-e-Islami. Tabligh Jamaat also claims to be non-political and non-sectarian. It is proving to be an unwitting ally of jehadi and sectarian organizations writes Mohammad Amir Rana in his book titled ‘Gateway to Terrorism.’

Admitting that this “creeping coup of religious convertism” that had begun with General Zia-ul-Haq has not only infected the army but also large sections of society, Imtiaz Gul writes in the Newline (Karachi) that many Generals still reckon “Islam as motivating force” considering it crucial for the rank and file of the army. But he seeks to remind them that the Americans, Germans, French and the Canadians don’t motivate their soldiers by using Christianity or any other religion; similarly, the Indians do not invoke Hinduism to motivate their forces against Pakistanis or Chinese. He warned that one point should be clear: the moment religion is inducted into statecraft, the lines between state and non-state armies largely vanish.

(* The author is a Columnist on South Asian Affairs)