It is death penalty to Ajmal Kasab for 26/11 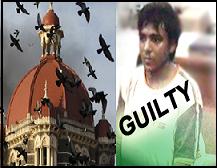 Mumbai: Finally, it is gallows to Ajmal Kasab (22), the lone surviving Pakistani gunman in the Mumbai terrorist attack.

Justice M L Tahaliyani of the Bombay High Court, who headed the special fast track court to try the case, sentenced him to death by hanging, three days after holding the Pakistani terrorist guilty of 26/11 mayhem.

In the court’s opinion, the judge said, Kasab has no chance to reform, and decreed “Keeping such a terrorist alive will be a lingering danger to the society and the Indian government.”

Kasab was present in the court room as the judge read his verdict. He sat mostly still looking ashen and staring at the floor. He broke down when he heard the sentence.

The sentences was for offences – murder, conspiracy to murder, waging war against the country, abetting murder and committing terrorist activities under the Unlawful Activities Prevention Act. He was also awarded life imprisonment on five other counts including attempt to murder, and criminal conspiracy and under the Explosive Substances Act.

Ten Pak militants trained and armed by the Lashkar-e-Taiba attacked a railway station, two iconic five-star hotels, a restaurant and a Jewish outreach center in the November 2008 siege of India’s financial capital. 166 people were killed in the carnage. Surveillance cameras showed Kasab shooting people with an automatic weapon at the railway station before police arrested him on the first night of the attack.

The judge recalled the Kandahar hijack case in which dreaded terrorist Masood Azhar and a couple of others held in Indian jails were swapped for the passengers held hostage on board the Indian Airlines plane on its way from Kathmandu in 2002. Azhar has since floated his own militant outfit Jaish-e-Muhammad (JeM)

“If Kasab is kept alive, this situation may occur again,” he said. The judge said Kasab had joined terror outfit LeT voluntarily and offered himself to be a “Mujahideen”..

Welcoming the verdict, the Indian Home Minister, Palaniappan Chidambaram said in New Delhi: ‘Kasab was sentenced not on the basis of his confessional statement but on the basis of evidence the prosecution managed to present to the court.

In Islamabad, spokesman for Pakistan’s Foreign Office, Abdul Basit, said he would react to the sentence only after legal experts analyzed the verdict.

It is not immediately clear whether Kasab will invoke the right of appeal against a death sentence available under the Indian judicial system.

Even otherwise, the High Court, in this case, the Bombay High Court will have to confirm the death sentence. Even if the High Court upholds the judgement, he can go in appeal to the Supreme Court and then to the President of India for clemency.

As of now, more than 300 convicts are on death row. About 50 of them have made mercy petitions to the President, which are pending. They include the assassins of Rajiv Gandhi, who are held in the Vellore jail.