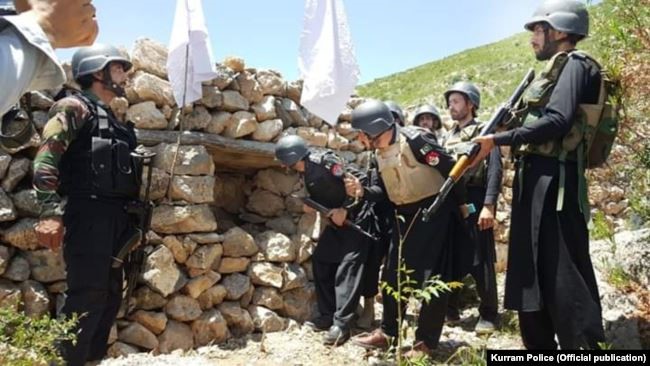 Two years after Pakistan merged the former Federally Administered Tribal Areas (FATA) into the administrative and political mainstream, disputes over land ownership have emerged as a dominant form of conflict in the western region, which reeled from military operations against the Taliban and Al-Qaeda for more than a decade.

In theory, Islamabad and Khyber Pakhtunkhwa’s provincial administration are responsible for ensuring the newly merged FATA districts follow Pakistan’s land laws and demarcation rules. In practice, however, the reform process is lethargic and haphazardly implemented, which foments new disputes while failing to resolve old ones.

Land in the seven former FATA districts along the Afghan border is often owned collectively and lacks official records. This often leads to conflicting claims among Pashtun tribes and clans, as well as disputes between residents and the government over its expanding presence in the more than 27,000-square-kilometer territory that is now part of the northwestern province of Khyber Pakhtunkhwa.

Scores of residents have died across former FATA in recent months as five of its seven tribal districts — South Waziristan, North Waziristan, Kurram, Mohmand, and Bajaur — have witnessed armed tribal clashes that are becoming increasingly violent.

“Most disputes are over the exact boundaries between land owned by different tribes,” he told Radio Mashaal. “Even sectarian conflicts have land disputes at their heart.”

Mohmand was alluding to clashes between Shi’a in the Balishkhel and Ibrahimzai villages of lower Kurram and Sunni members of the Chamkani tribe. Security forces moved in after dozens of fighters and civilians from both communities were killed over the course of five days in July.

Fahidullah, a government administrator who goes by one name only, agrees. As the additional assistant commissioner in South Waziristan, he spends considerable time arbitrating land disputes.

FATA became a staging ground for anti-Soviet Afghan Islamist guerrillas supported by Pakistan and the West in the 1980s.

“We don’t have a land register here, which worked fine [decades ago] when land was abundant and collectively used by local tribes,” he told Radio Mashaal. “But all the land disputes I know are over the murky demarcation of boundaries and land rights,” he added. “I see this pattern over and over again in every tribal conflict.”

In theory, Islamabad and Khyber Pakhtunkhwa’s provincial administration in the regional capital, Peshawar, are responsible for ensuring the newly merged FATA districts follow Pakistan’s land laws and demarcation rules. In practice, however, the reform process is lethargic and haphazardly implemented, which foments new disputes while failing to resolve old ones.

Ayaz Wazir, a former diplomat and resident of South Waziristan’s main town, Wana, says the Soviet occupation of neighboring Afghanistan in the 1980s and the U.S.-led invasion of that country in 2001 transformed the tribal areas. FATA became a staging ground for anti-Soviet Afghan Islamist guerrillas supported by Pakistan and the West in the 1980s, and after 2001 the Afghan and Pakistani Taliban, Al-Qaeda, and Central Asian Islamist militants retreated to the region, eventually controlling large swathes of FATA. Their violence and Pakistan’s subsequent counterterror operations caused large-scale civilian casualties and displacement.

“Fifty years ago, we hardly had any conflicts over land,” Wazir told Radio Mashaal. “Another major issue is rapid population growth. Areas that were barren a couple decades ago are now full of houses, fields, and orchards.”

FATA’s population increased to more than 5 million in 2017 from over 3 million in 1998, according to government census data. But locals say the region’s actual population is over 10 million.

At least 3 million FATA residents were displaced by the violence that first erupted in 2003. Once they returned years later to their villages, many found themselves embroiled in land and property disputes.

Late last month, there was a clash between residents of Makin and Razmak, two towns that straddle the border between the South Waziristan and North Waziristan districts.

Malak Binyamin Mahsud, a tribal elder in Makin, says that when fellow members of their Mehsud tribe returned in 2015 they found Razmak’s Wazir tribe had built houses on their land. He says this led to armed clashes that began in 2017. Nearly half a million members of the Mehsud tribe were displaced by a large-scale military operation, Rah-e Nijat, in 2009.

Malak Naik Amal Khan, a Wazir tribal leader in Razmak, counters such claims. “We showed them the [the British-era] maps and written records and offered to vacate their land if they would leave ours,” he said.

Tribal disputes over land ownership typically drag on for years and even decades in Pakistan. British colonial officers extensively mapped the tribal territories of FATA, but the relevance of those maps and records today is highly contested.

Hassan Turi, an agrarian political economy researcher based in Kurram, sees an economic angle in such disputes. He says that while some land in his district was settled with clear ownership by individuals, the rest is still owned by tribes. These are termed “shamilat” or collectively owned.

“These lands have forests and pastures, so they are a precious resource for cattle farmers,” he told Radio Mashaal. “Land close to towns, markets, or roads is sought after because people living in remote mountain valleys want to be closer to urban life.”

Former lawmaker Haji Shahji Gul Afridi says he recently attempted to arbitrate one of the most complicated disputes in former FATA between the Safi clan in Mohmand and residents of Nawagai in neighboring Bajaur.
“I blame money,” he told Radio Mashaal. “Land prices have gone up after FATA’s merger, and that’s why people are fighting over it.”

Islamabad merged the tribal areas into the country’s administrative, judicial, and political mainstream in 2018. While former FATA is officially part of Khyber Pakhtunkhwa Province, the police force, courts, taxation offices, and other government institutions will take years to integrate.

In March 2019, Khyber Pakhtunkhwa’s administration extended land laws to former FATA, granting broad powers to local officials and allowing residents to take their land disputes to court. But across former FATA, little has changed. A lack of land settlement also impedes revenue, investment, and banking, which are required for economic uplift in the underdeveloped region.

Under a 2015 agreement, the Khugakhel Pashtun tribe had granted 38 acres to the National Logistics Cell (NLC), a government freight company. But according to a report in the English-language daily Dawn, they now accuse the NLC of attempting to unlawfully grab their personal property.

On October 13, residents of Torkham, a key border crossing with Afghanistan in the Khyber Pass, forcibly shut down the construction of a customs terminal. Under a 2015 agreement, the Khugakhel Pashtun tribe had granted 38 acres to the National Logistics Cell (NLC), a government freight company. But according to a report in the English-language daily Dawn, they now accuse the NLC of attempting to unlawfully grab their personal property.

In July, a tribal posse demolished houses belonging to Muhammad Rahman in South Waziristan after he refused to give the NLC his land, located near the Angoor Adda border crossing with Afghanistan. Rahman told Radio Mashaal that the authorities did not prevent the tribal mob, locally called a “lashkar,” from destroying his properties, adding that the police arrested his brother and two cousins after they attempted to file a report on the incident.

Hameed Khattak, a senior civilian administrator in South Waziristan, said the authorities didn’t intervene on Rahman’s behalf because he had violated a collective tribal agreement with the government in which his Zali Khel clan would sell their land to the NLC for the construction of a trucking terminal. Khattak suggested Rahman instead take the issue to a local tribal council for resolution.

Mona Naseer, a researcher from the region, argues that the newly merged tribal districts need legal, institutional, and public-centric infrastructure. While the region is now under the judiciary’s purview, she says, courts must ensure the protection of individual, land, and property rights.

“Priority should be given to the settlement of land and revenue records,” she told RFE/RL Gandhara. “This will not only resolve issues among tribes but will provide enhanced investment incentives to local people and reduce the potential for conflict and the use of land as collateral.”

Wazir says a coordinated government effort to use the British-era maps and land documents would help establish tribal ownership. “If the local administration shows these maps and documents, it could help the tribes solve their problems though jirgas,” he said, referring to tribal councils by their local name.

Only government officials, however, have access to the maps and other British-era land documents and keep them closely guarded. Fahidullah, the civilian official in South Waziristan, says they may not establish clear ownership, which would exacerbate existing conflicts. “We can surely use some of these documents, but ultimately the two sides have to compromise,” he said.

The proliferation of land disputes in the sensitive region requires a larger and more coordinated effort at the local, regional, and national levels. A failure to resolve current disputes or establish robust legal mechanisms for private property ownership will have far-reaching consequences and threaten the fabric that holds the newly merged tribal districts together.

(Sahill is a journalist for RFE/RL’s Radio Mashaal in Prague.
Abubakar Siddique, the editor of RFE/RL’s Gandhara website)