By Malladi Rama Rao
To describe the Left parties as the 12th Man of Indian politics may be patently unfair. The role they have played from the days of first coalitions in the Hindi belt to Indira Gandhi period and from the National Front to United Front and to Soni Gandhi’s stewardship of UPA-1, was impressive though their back seat driving was without responsibility. Frankly, the comrades have shown dexterity that is not normally associated with our politicians. Should they be condemned for the feat? Not necessarily because their interventions served the larger national cause even as they knowingly committed historical blunders. 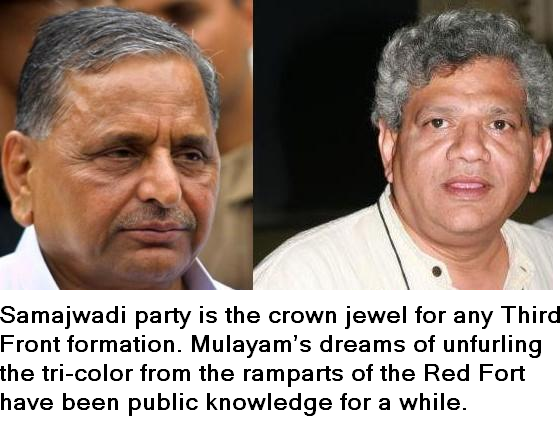 The greatness of Left parties is their collective decision making process. The leaders have their differences and angularities and behind the walls of AK Gopalan Bhavan and Ajoy Bhavan they speak freely; once a decision is taken, everyone falls in line.

Like Jyoti Basu and Harkishan Singh Surjeet did in 1997 when the CPI-M politburo out rightly rejected the offer of Prime Minister’s post to Jyoti Basu.

“With hardly 30 odd MPs, we will be left at the mercy of 270 others who will keep telling us to do their bidding and this situation is untenable”, the politburo decided by majority vote. Jyoti Basu, despite his reservations, and Surjeet despite his larger plans for the Marxist party went along with the party line.

It is tempting to argue that the shape and contours of Left politics could have been different had the Marxists, like the CPI, decided to at least join the Deve Gowda government. The Year 1997 marked the decline of the mainline Left movement; its dreams of growing big have turned into Alnaskar’s dreams with the CPI, CPI-M and their allies in the Left Front reduced to a 3-state wonder.

Yes, this has not reduced their relevance on the national scene. For this credit goes to their ideological purity though they do often appear as Marxist Ayatollahs to the dismay of their sympathisers.

So much so, it is interesting to hear Sitaram Yechury say during Coffee @ UNI that the Left is ready with an alternate practical plan to defeat both the Congress and BJP. While he is right in accusing the two main parties with trying to deflect people’s attention from the real issues – corruption, growing joblessness, and inflation, his confidence that people will this time vote for an alternative set of policies appears neither here nor there.
The allies he is looking for offering the alternative are the usual suspects – the Samajwadi Party, Biju Janata Dal, Telugu Desam, one of the Janata Dal amoebas and either of the two Dravidian Parties.

Since Jayalalithaa Jayaram has developed a rapport with Na Mo, and her occasional friend Subramanian Swamy is firmly in the Saffron Party, the AIADMK will be gravitating towards the BJP. It will make the Left to return to the DMK-fold just as the Congress will have to do business with Muthavel Karunanidhi.

The JD amoeba that can close ranks with the Left is the JD-S of Hardhanahalli Doddegowda Deve Gowda in Karnataka. But he and his son have entered into a two-election deal with the BJP under which in return for support in the recent Lok Sabha by-election they have agreed to lend a helping hand to the saffronites in 2014 final. BJP knows accords matter little to the Gowdas; more over the former Prime Minister has not given up his own Alnaskar’s dreams. So he will use the forthcoming re-entry of B. S. Yeddyurappa into BJP as a NaMo acolyte to gravitate towards the Left.

Such luck may not be in waiting in so far the Telugu Desam is concerned. The party that came up on self-respect plank is groping for ways to protect the self-respect of its leaders in and outside the Party’s first family circle. Crystal gazing TDP stars is hazardous as of now when we hear that its leaders are still nostalgic of their association with the NDA. One possibility that I can see is a repeat of 1999 when the TDP was the proverbial insider-outsider. Well, that is going to be bad news for the Left, who always count Chandrababu Naidu as a natural Leftist.

The Samajwadi party is the crown jewel for any third front formation. Mulayam Singh’s dreams of unfurling the tri-colour from the ramparts of the Red Fort are public knowledge for a while. Also public knowledge is the orchestrated campaign to undermine his son’s rule as a reign of five and half chief ministers. Not that there is no substance to the criticism against Akhilesh Yadav’s rule. There is but the point is that the flip-side is being blown out of proportions.

Sitaram Yechury, articulating the Left views, appears soft on beleaguered Mulayam. He also appears secure in the knowledge that the old phelwan will have to come to their fold when chips are down. It shows that the comrades are not unduly worried about the match fixing deal that the SP and the BJP have entered into these days.

Most successful coalitions are post-poll alliances. And a non-BJP and non-Congress government is a reality every 10 years. Will history repeat? Much depends on how the BJP puts its act together and how the Congress manages its race. Clearly the going is tough for NaMo and Ra Ga.

It is going to be tougher for Alnaskars in the Third Front even if they want, as Yechury said in his interaction with the UNI editors, “to set our political agenda different from this NaMo-RaGa”. Because there are not enough allies, who have the strength and stamina to lift the numerical spirits, for a pre-poll alliance.

The post-poll scenario brings its own X-factor and may end up as a throwback to either 1997 or 2004. And in such an event, the Left parties will find it difficult to shake off the 12th Man image with or without a Common Minimum Programme (CMP). But it may be good for India as experience of 2004 shows in retrospect. About it next week.