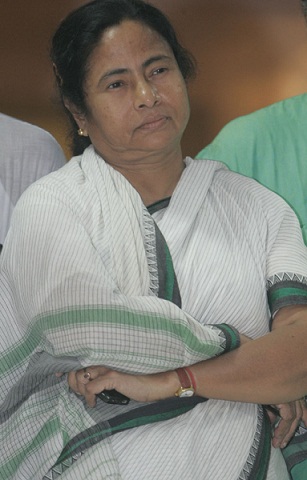 New Delhi (Syndicate Features): Entertainment channels in West Bengal must be offering a variety of ‘reality show’ to lure viewers and advertisers by incurring heavy costs for the production. If they are cost conscious it is time they thought of capturing audience with a very lively political reality show in which the state’s chief minister will be the main star.

Mamata Banerjee, the mercurial Trinmool Congress supremo, has been regaling audiences with threats to unsettle the UPA where her party is a crucial partner. She has been busier upbraiding the Congress-led UPA government more than her long-standing political foe, the CPI (M) or addressing growing security concerns arising from the Maoists revival after a comparative lull.

Her threats may be empty, as most people can see. But her words and action enliven the political scene, both in Kolkata and Delhi, more than the running spats she has with her Left rivals in West Bengal and the cumulative effect of all the anti-graft voices against the UPA government in New Delhi.

It probably leaves Mamata little time to attend to the myriad problems of her state for which she has blamed the more than three decades long Left Front rule. Solving or trying to solve problems can be a trying and long drawn out effort. And certainly it holds less attraction than the sight and sound of verbal jousts between partners or allies.

Her outbursts against the Congress will suggest that she is ready to simultaneously take on the duo of the CPI (M) and Congress to establish her credentials as West Bengal’s most popular leader. What better entertainment on the idiot box than a diminutive local heroine single-handedly taking on the mightiest of the land? Another version of the David and Goliath story!

It gets even more entertaining when it becomes clear that this unequal fight will have many repeats. So what if some see her (eklo chalo) go-alone policy as adding to her problems and erosion of her popularity. She probably understands it as well but rightly allows her compulsion to look combative prevail.

Those in her party who do not share her impetuosity add spice to the ‘reality’ show. A day after her anti-Congress outburst which followed a rally in South Kolkata protesting against the alleged assault on Congress party workers by the Trinmool activists, one of the senior Trinmool Congress leaders said that his party has no desire to snap ties with the Congress. It is highly unlikely that this reconciliatory message was delivered without the approval of Mamata Banerjee. Such intrigues in the plot are good for the TRPs.

It is this kind of mystery that signals ‘all is well’ between the Trinmool and the Congress and even hints at the two parties sailing along and yet it peppers the sight with her admonitions to the Congress. It will be tragic if Mamata Banerjee decides to jettison her impulsive, emotional style of functioning and thereby lose all her TRP value. Her show cannot sell if she does not throw up tantrums (and populist stance) on issues like petrol price hike.

The viewer knows that governance and performance might fail but populism will remain a bulwark against her old foe, the CPI (M) from whom she wrested the Kolkata throne after a dogged street performance even when her job required her presence in Rail Bhavan in New Delhi. The state of West Bengal loves its Baul and Rabindra Sangeet as much as the decibel effect of twin railing against the Congress at the Centre and CPI (M) in the state.

Reality show does not expect its star performer to express regret for any hasty act. If her politician instincts require a damage control exercise she could always depute a party functionary to do the job, leaving her space guarded for further outbursts that are such big hits with the populace. It keeps her ‘rebel with a cause’ image intact. So what if at times it keeps her political ally guessing.

After the South Kolkata rally by the Congress, Mamata said that it was for the Congress to ‘decide’ whether it wanted to stay with the Trinmool Congress as the latter was quite capable of running the state government without the Congress support. That is the kind of rebuff you would expect to hear from a political reality show star.

The TV audience being clever know that such strong words do not necessarily mean troubled times ahead in the alliance between the Trinmool and the Congress. Mamata Banerjee, like a true ‘Didi’, the kind hearted elder sister, has shown that her scolding does not cross a red line. Those not addicted to reality shows on TV channels might translate it as meaning that she knows in her heart of heart that she cannot run her government without the Congress and the help that comes from the Centre where the Congress will be in power till the UPA government completes its five-year term in 2014.

Despite all the fire that she breeds, chief minister Mamata is a reality star in the literal sense. She is desperate for funds from New Delhi. Her game of blaming the Centre in case this help is not forthcoming may work in her favour for a while, but ultimately it will not help her retain her present hugely popular base. Her USP is her special brand of hard realism presented with theatrical skills. Mamata Banerjee could lend more realism to a reality show than any professionally trained actor. Her presence does assure a boost for the TRP. ###