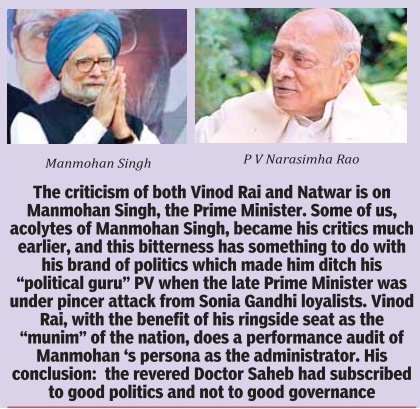 If there is one who badly deserves sympathy, the honour rightly goes to Manmohan Singh, who is under attack as he steps into his twilight years. And if there is one who is not getting any sympathy, that honour is also reserved for him proving the adage that fate can be really cruel. Even his worst critics have not reserved for him the obscurity that appears to be his destiny. Certainly, we are not prepared for the trenchant criticism of Vinod Rai, former CA&G, that Manmohan Singh has no intellectual and professional integrity. Rai is a former student of Singh at the Delhi School of Economics and during his long IAS career had occasions to work under “doctor saheb” as the former prime minister is addressed by friends and admirers alike.

In a limited sense, we are prepared to see brickbats for Manmohan Singh for quite a while, more so after Natwar Singh, the loyalist turned trenchant critic of Congress party’s First Family, wrote disparagingly about him and declared that Manmohan Singh had left no legacy. Very few take Natwar Singh seriously, and for some his book is, indeed, no more than a disgruntled rant. He is also blamed for his role in making 10,Janpath a port of call for visiting world leaders – a fact he himself had admitted in his latest book “One Life Is Not Enough” ‘ that had generated lot of heat and has reportedly a second print order.

The criticism of both Vinod Rai and Natwar is on Manmohan, the Prime Minister. Some of us, acolytes of Manmohan Singh, became his critics much earlier, and this bitterness has something to do with his brand of politics which made him ditch his “political guru” PV when the late prime minister was under pincer attack from Sonia Gandhi loyalists. Because, this school firmly believed and continues to subscribe to the theory that Singh’s one-liner that Caesar’s wife should be above suspicion virtually sealed PV’s fate in the Congress Parliamentary Party (CPP) shortly after the 1996 election.

“PV’s decision to appoint Manmohan Singh as Finance Minister in 1991 came ‘out of the blue’”, according to his daughter, Daman Singh. Her book “Strictly Personal, Manmohan and Gursharan” is a calibrated effort to put the “record straight” after Sanjay Baru with his “Accidental Prime Minister” painted a picture that was unflattering at its core. According to her, Manmohan is not a manipulative politician or a wheeler-dealer. “He is neither a misfit in politics nor is he a reluctant politician”, Daman said in several interviews after her book was released last month.

In so many words, Vinod Rai doesn’t dispute her stand; in fact, he endorses her certificate while popping up the question: Did Manmohan Singh invoke his integrity template to prop up the UPA for a decade. This question first cropped up when the likes of Sibu Soren and Lalu Prasad Yadav became his cabinet colleagues in the first UPA. And it gained more currency after the UPA had got embroiled in several scams, the most brazen being Aircel-Maxis case involving DMK’s Dayanidhi Maran, 2G scam involving A Raja, also of the DMK, and the Coalgate that features a Congress leader from Andhra Pradesh..

Vinod Rai, with the benefit of his ring side seat as the “munim” of the nation, does a performance audit of Manmohan Singh persona as the administrator. His conclusion: the revered doctor saheb had subscribed to good politics and not to good governance.

Put differently, Rai’s verdict shows that Singh’s 1996 one-liner was not an aberration, whether you like it or not. And this offers good food for thought to future historians and political economists alike in assessing the doctor saheb’s contribution to Indian political lexicon. One thing can be said at this point in time with no fear of contradiction. It is that Manmohan Singh has proved that personal integrity in financial terms is no virtue when the crying need of the day under UPA 1 &2 was intellectual and professional integrity, and the urgency was not to let the century old Congress party end up as a limpet afflicted with paraplegia.

History will be unkind to Manmohan Singh, the politician, therefore. It is doubtful whether history will be kind to Singh, the economist, though he has been hailed as the Father of India’s Second Independence, which had freed the country from the clutches of Nehruvian Fabiansm that was rooted in the Soviet Union’s October Revolution. It suited the Congress and the opposition of the day to credit Singh with the economic reforms and brand it as Manmohonomics.

A close examination of economic policy of the Congress –led United Progressive Alliance with or without the help of Vinod Rais shows that Manmohan Singh as Prime Minister had turned a blind eye to economic reforms. For Sonia Gandhi, who was the real master of the UPA, focus was not growth but socialist era doles, and freebies. For Sonia- Singh successors on the Raisina Hill, therefore, reviving growth is not an easy task. They have to make a beginning by returning to the basics and it is dismantling the structures they had erected on the PV era ruins of permits-quota raj.

Put simply, history will give credit for the economic reforms of 1991 to the forgotten revolutionary, as the US-based economist Arvind Panagariya describes P V Narasimha Rao, and points out that while Singh remained the face of the reforms throughout his tenure, PV was hardly a passive player. The now-famous New Industrial Policy of July 24, 1991, “which consigned investment licensing to the dustbin of history and opened the door to direct foreign investment thereby emancipating Indian entrepreneurs”, originated in the PM’s office, as he had held the Industry portfolio himself.

Well as PM, PV always characterised the economic reforms as an extension of Nehru-Indira- Rajiv polices and this has made Family loyalists to argue that Rajiv Gandhi, who had spoken of his dream of 21st century India, not PV, should get credit for economic reforms. They may have a point. But it will be unfair to ignore two reality checks. One PV had seen the failure of Fabiansm from close range as chief minister and union minister. Two he went beyond the Rajiv story, made a “complete U-turn without seeming to be a U-turn” in key sectors like banking, telecom and civil aviation.

Says Arvind Panagariya “Fifty years from now when historians take stock of the makers of the new India, two individuals from our times will figure prominently on their lists: Prime ministers P V Narasimha Rao and Atal Bihari Vajpayee. If justice prevails, by then, the nation would have also honoured them with Bharat Ratna”.

Difficult to disagree with the celebrated economist though PV, true to his nature, did not go to the town with his trade mark pout, and allowed his Finance Minister to hog all the limelight. More so in the light of scam-blasts from the past ten years that have come to demolish the defences a loving daughter has tried to erect for her dotting father.

(*The writer, Delhi-based senior journalist and South Asia analyst, can be reached at mramarao2008@gmail.com)