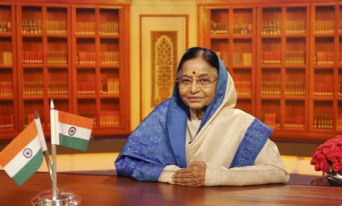 Pratibha Patil has become the first President in the world to voluntarily declare the details of her assets and thus has set an example for the world,particularly to India’s neighbors..

Patil, who was elected President of the largest democracy four years back, has posted the details of her movable and immovable properties on her official website, www.presidentofindia.nic.in

The movable properties are worth about Rs. 16 million; immovable asserts are valued at Rs8.383 million. In her native Jalgaon along the west coast of Maharashtra, President Patil has farm land worth about half a million rupees. She inherited 3.57 hectares agricultural land worth nearly a million rupees in Jalgaon and another land worth Rs2 million in Dhule district from her father. She has a house and some farm land in Amaravati district as well.

Her investment are in fixed deposits (Rs. 6.88 million) , Public Provident Fund (Rs. 1.26 million), post office savings scheme ( little less than half a million), and infrastructure bonds ( Rs2.9 million). She has not invested much in shares. Her bank account shows a balance of Rs1.633 million as on date.

Indian President, whose husband is an educationist and is running several institutions, has gold jewellery worth Rs,3.1 million and silver articles worth Rs 69,134.