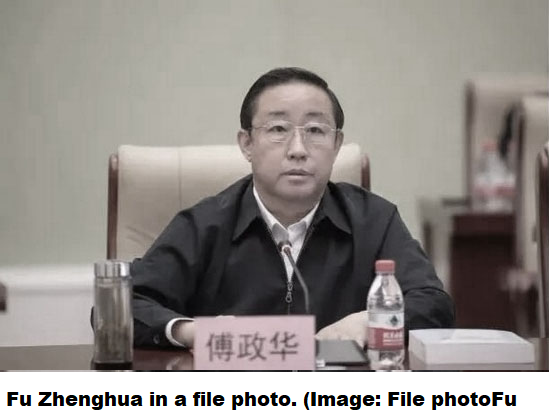 Fu Zhenghua, a former Chinese minister of justice, was tried on July 28 at the Changchun City Intermediate Court in Jilin Province on suspicion of accepting bribes and bending the law for personal gain.

According to the circular of the Changchun City Intermediate People’s Court, the case was partially bent on personal gain and was not tried in public because it involved state secrets, and Fu Zhenghua pleaded guilty and repented in court, and the court will announce the verdict at a later date.

Fu Zhenghua is another senior political and legal official who succeeded Sun Lijun, China’s former vice minister of public security, in 2021. The Central Commission for Discipline Inspection has accused Fu Zhenghua of his involvement in Sun Lijun’s political gang, but a report by The Chinese state-run Xinhua News Agency on Friday did not mention the political charges against Fu Zhenghua, but rather that Fu Zhenghua accepted bribes of more than 117 million yuan and protected his brother Fu Weihua from criminal prosecution.

Fu Zhenghua was indicted by the Changchun Municipal Procuratorate on the 11th of this month and tried in less than a month, and the speed of progress is quite rare.

At present, the CCP is still “eliminating the poison” within the political and legal system.

The CCP’s official circulars announcing the expulsion of Sun Lijun, Fu Zhenghua, and others from public office (shuangkai) contain harsh wording, but the court trial focused only on economic corruption. In March this year, the Central Commission for Discipline Inspection and the State Supervision Commission accused Fu Zhenghua of “participating in Sun Lijun’s political gang, forming gangs and factions, and forming parties for personal gain; Cheating and deceiving the Central Committee on major issues endangers the centralization and unity of the Party.”

When Sun Lijun was double-opened, he was accused of “doing whatever it takes to achieve his personal political goals, manipulating power by any means, engaging in cliques and gangs within the party, forming cliques and factions, cultivating personal forces, forming interest groups, forming cliques to control key departments, seriously undermining the party’s unity and unity, and seriously endangering political security.”

The Changchun Municipal People’s Procuratorate indicted and alleged that from 2005 to 2021, Fu Zhenghua took advantage of his position and the convenience of his authority or position to provide assistance to relevant units and individuals in business operation, job adjustment, case handling, etc., and illegally accepted property directly or through his relatives, totaling more than 117 million yuan.

The indictment also alleges that from 2014 to 2015, when Fu Zhenghua was the director of the Beijing Municipal Public Security Bureau, he concealed and did not report clues about his brother Fu Weihua’s suspected serious crimes and did not deal with them according to law, resulting in Fu Weihua not being prosecuted for a long time, and the circumstances were particularly serious.

According to the Xinhua news agency, during the trial, the procuratorial organs presented relevant evidence, the defendant Fu Zhenghua and his defender cross-examined the evidence, the prosecution and defense fully expressed their opinions under the auspices of the court, and Fu Zhenghua made a final statement and expressed his confession and repentance in court. More than 20 people from all walks of life observed the trial in the open trial.

Fu Zhenghua, 67, has long served in China’s political and legal system and has participated in the investigation of major cases such as the “Huang Guangyu case” and the “Magajue case”. From February 2010 to March 2015, Fu Zhenghua served as party secretary and director of the Beijing Municipal Public Security Bureau, and soon after taking office, he shut down top nightclubs such as Beijing’s heaven and earth. Since 2013, Fu Zhenghua, who has also served as vice minister of public security, has been responsible for investigating Zhou Yongkang’s case and launched a campaign against online “big V” to crack down on online rumors.

Fu Zhenghua was a member of the 19th Central Committee of the Communist Party of China and, in March 2018, he was appointed Minister of Justice and Deputy Secretary of the Party Group of China. In April 2020, due to his age limit, he no longer served as the minister of justice of China and the deputy secretary of the party group, and on May 19 of the same year, he was added as the deputy director of the Social and Legal Affairs Committee of the National Committee of the Chinese People’s Political Consultative Conference.

Rights defense lawyers pointed out that Fu Zhenghua led the “709 major arrests” against rights defense lawyers within the political and legal system, banned law firms during the Ministry of Justice, and revoked lawyers’ qualifications. After Fu Zhenghua fell, several lawyers who had been arrested “competed to defend him” on WeChat. The police in the system also have a schadenfreude attitude towards Fu Zhenghua, accusing him of “squeezing the low-level cadres and policemen.”