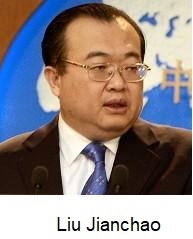 A senior leader of the Communist Party of China (CCP) Liu Jianchao is now in Kathmandu on a three-day visit ostensibly to explore a possible electoral alliance among Nepal’s communist parties.

Nepal goes to polls in November.

A possible agenda of the visit could be to encourage a pre- or post-poll alliance between like-minded Leftist forces or only between the UML and the Maoist Centre,” a UML leader, who has interacted frequently with Chinese leaders told the Kathmandu Post.

Liu Jianchao succeeded Song Tao as the head of the International Liaison Department of the Communist Party of China. He had in the last week of June interacted with CPN-UML chief KP Sharma Oli and Pushpa Kamal Dahal, Prachanda, of CPN (Maoist Centre), continuing the trend of his predecessor.

He is scheduled to meet both of them besides CPN (Unified Socialist) leaders Madhav Nepal and Jhala Nath Khanal.

This is another high-level visit from China after the visit of the Chinese State Councilor and Foreign Minister Wang Yi in March.

Four months ago, China invited leaders of both parties to a function in Kunming. And delivered the message that Beijing wishes the Nepali Communist parties to join hands.

The visiting Chinese leader paid courtesy calls on Prime Minister Sher Bahadur Deuba and Foreign Minister Narayan Khadka today. after arriving in Kathmandu on Sunday for a three-day visit.   “Matters of mutual interest were discussed and views exchanged on “further strengthening of bilateral relations between Nepal and China,” said an official statement after the two meetings.

Local media reports indicate that the Chinese Communist Party is   keen to expand ties with the Nepali Congress also.

More recently, another US State Partnership Program (SPP) in the field of security and military caused a flurry of debates in the country. China expressed grave concerns over whether Nepal would be an US ally in defence cooperation.

The Chinese government even commended the decision after the Nepal government decided not to be a part of the SPP.

The Liu Jianchao delegation will also look to promote Chinese interests in Nepal besides expediting the China-led Belt and Road Initiative and building party-to-party ties between the CPC and Nepal’s political parties.