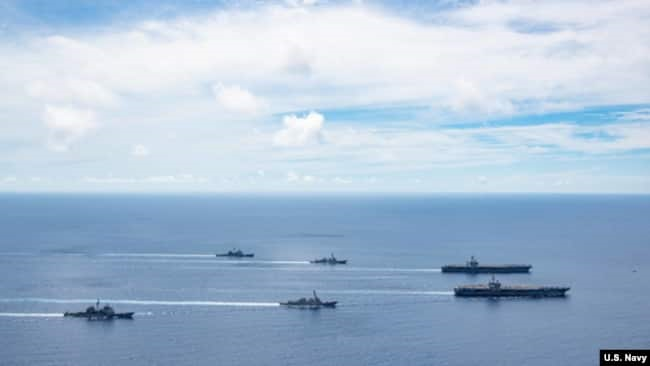 Since the timing entered July, tension has re-emerged around the South China Sea. In addition to the repeated entry of U.S. Navy warships into disputed waters, the People’s Liberation Army (PLA) also announced that it would hold military exercises in the South China Sea between July 17 and 20, which is quite a two-power struggle.

In this regard, some analysts said that the change of regime in the Philippines, the upcoming 20th National Congress of the Communist Party of China, and the return to normal military activities of various countries with the easing of the  covid epidemic will lead to the heating up of the situation in the South China Sea.

The South China Sea Strategic Situational Awareness Program, a research network hosted by Peking University’s Institute of Oceanography, said on July 19 that the USS Ronald Reagan, a U.S. Navy aircraft carrier, had been operating in the waters near Wan’an Beach in the Spratlys for two consecutive days.

This sensitive water is based on its geostrategic value and abundant oil and gas resources, which led to a fierce confrontation between China and Vietnam in 2019.

Long before Reagan entered the South China Sea on July 12, the think tank tracked its movements around the Spratly Islands and quoted Vietnam as saying that Reagan would visit Da Nang in mid-to-late July.

After the Reagan’s track movement was reprinted by Chinese media such as the Global Network, it caused dissatisfaction among Chinese netizens.

A netizen left a message on Weibo: “Look at it and nest fire.”

Another netizen looked forward to The Chinese official hardening of the United States, writing in a message: “The Difficulties of the War to Resist US Aggression and Aid Korea have all survived, and now we can no longer bear it.”

In addition to the USS Reagan, the USS Benfold, the U.S. Navy’s guided-missile destroyer, has also flown through the Spratly and Spratlys twice since July 13 to conduct the Freedom of Navigation Operation (FONO) to demonstrate the United States’ commitment to freedom and openness in the Indo-Pacific region.

However, in recent days, China has been particularly sensitive to US warships sailing in the South China Sea.

On July 13, Tian Junli, spokesman for the Southern Theater of the Chinese People’s Liberation Army, loudly criticized the US military for illegally breaking into China’s Paracel territorial waters without approval and being an out-and-out “security risk maker in the South China Sea.”

He said that the Platon Army has organized naval and air forces to follow the supervision, warning, and driving away, and for the first time published the “on-site disposal photo” taken from the navy’s “Xianning ship.” The resolution of the photo is clear, which not only can identify the hull number of the “Benford”, but also shows that Chinese soldiers are determining the orientation of the US ship through sophisticated instruments.

China’s watchful eye on every move of U.S. warships sailing through the South China Sea has heated up tensions in the disputed waters.

In this regard, Lin Tinghui, deputy secretary-general of the Taiwan Society of International Law, which specializes in the study of the law of the sea and the South China Sea in Taipei, said that there are three major reasons for the recent heating up of the situation in the South China Sea. First, as the COVID-19 pandemic has slowed down, the military operations that Have been reduced by the impact of the epidemic in Western countries have gradually returned to normal. Second, China’s domestic austerity in the political climate has also made the PLA more radical in dealing with the U.S. military.

He said that because both U.S. and Chinese warships are in visual range, it means that each is under threat from the range of the other ship’s guns. In addition, he believes that the Platon Army of the Chinese Communists for the first time imitated the US military in publishing the reconnaissance photos, which has a strong sense of internal propaganda, and its intention is the same as the Chinese military plane’s behavior of releasing aluminum foil interference wires at close range to the Australian reconnaissance plane at the end of May, causing damage to the engine of the Australian fighter.

Lin Tinghui told VOA: “The 20th National Congress of the Communist Party of China is about to be held before the end of October, so there must be pressure on the performance of various systems to safeguard the concept of national sovereignty.” As you can see, the Chinese Coast Guard is also very active, and then, the People’s Liberation Army is also unusually active in responding to the interference of Western countries, mainly because before the 20th Party Congress, the various systems were grabbing the credit.”

Inauguration of the new president of the Philippines, “South China Sea Arbitration Case” has heated up again

In addition to the above two reasons, Lin Tinghui believes that after the re-election of the Philippine president, the new president Ferdinand Marcos Jr. Repeatedly re-mentioning the South China Sea arbitration case, which had been shelved by the previous government for a long time, showing a tough stance on resistance to China and investing new variables in the regional situation, was the third reason for the heating up of the situation in the South China Sea.

“South China Sea Arbitration” means the decision of the International Court of Arbitration in The Hague, the Netherlands, on July 12, 2016, in respect of the Philippines’ claim to China’s claim in the South China Sea. The International Tribunal found that historical evidence of China’s claim to sovereignty over the South China Sea and the extent of the “nine-dash line” delineated by China lacked legal basis, and that China’s artificial island and reef projects, oil exploitation and interference in fishermen’s activities in that area violated Philippine sovereignty.

China has refused to accept the outcome of the arbitration for many years, which has made the Philippines, which won the case, also take Advantage of China.

In particular, former Philippine President Rodrigo Duterte, who at one chose to shelve the arbitration in order to improve relations with China, once threatened: “It’s just a piece of paper, I will throw it in the wastepaper basket.”###