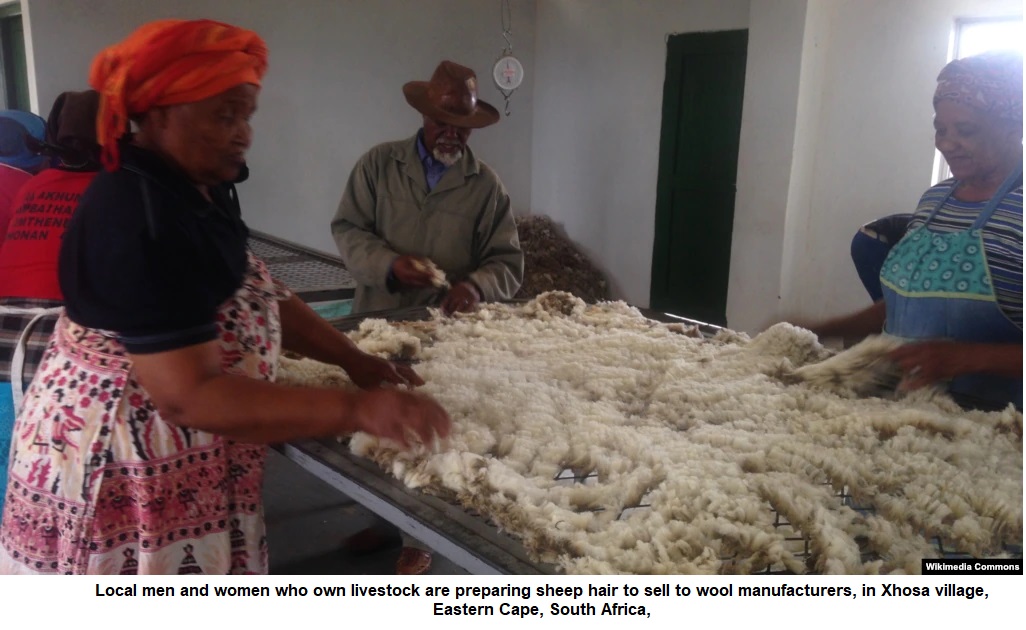 Sipiwo Makinana lives in Ugie, a small town at the foot of the Drakensberg Mountains in a postcard-worthy region of the Eastern Cape province, where he’s a small-scale sheep farmer.

Makinana says he usually makes about 150 rand, or $9, per kilo for his wool. But since April, things have been tough, he told VOA, after China banned South African wool exports due to an outbreak in some areas of the highly contagious foot-and-mouth disease.

“Out of the ban by China, I’ve lost 60,000 rand, which is a lot of money to me as a small-scale farmer,” lamented Makinana, saying other sheep farmers in his area have wool just sitting in their sheds going to waste.

South Africa’s total wool exports are worth approximately $300 million per year, and about 80% of that goes to China. Local sheep farmers and industry groups are now calling on Beijing to lift the ban.

The ban has caused losses worth some 734 million rand, or $43 million, said Leon de Beer, general manager of the National Wool Growers’ Association.

“The ban is unwarranted since South Africa has protocols in place that regulate the storage of wool after shearing as stipulated,” he said, explaining that after shearing it is stored at the temperature required by the World Organization of Animal Health.

De Beer says there are more than 40,000 small-scale sheep farmers in South Africa who produce close to six million kilograms of wool annually. Their livelihoods and those of another 4,500 seasonal sheep shearers are now at risk.

The farmers were also only just recovering from the effects of drought, de Beer said, and now it looks like the first wool auction of the season, scheduled for 17 August, will be a washout too.

“These producers and surrounding communities will fall back into poverty should the Chinese market remain closed to wool from South Africa,” he told VOA.

“Most our emerging farmers — we talk about 43,000 emerging Black farmers that are exporting the bulk of the wool to China — their entire households are suffering at this point in time,” said van der Rheede.

Wandile Sihlobo, chief economist at the Agricultural Business Chamber of South Africa, explained that while most commercial farming in South Africa is still White-owned, almost 30 years after the end of apartheid, wool production is the industry has the largest share of Black farmers.

“Black farmers in South Africa make up about 18% of the wool production… and you compare that with other commodities where Black farmers make up roughly on average about 10% in commercial farming,” he said.

“South Africa is in a process of rebuilding or improving the contribution of Black farmers into their agricultural production, so the ban on their exports to China is really weighing on small-farmers,” he added.

AgriSA’s Van der Rheede said the body is lobbying the South African government to take up its concerns with China.

“All areas where wool is being produced, those areas are not in any way affected by the disease, and they can also ensure that wool that is being exported (is) treated properly, so that no spores of foot and mouth can survive,” he added.

The Chinese Embassy in Pretoria did not respond to repeated request for comment, but Chinese state media has previously written about the foot-and-mouth outbreak in South Africa.

One article by Xinhua in April noted the outbreaks were caused by illegally moving animals out of foot and mouth disease-controlled zones in South Africa.

In the most recent outbreak of the disease, China and Mozambique put in place trade restrictions.

For wool, Sihlobo said South Africa also sells to Mexico, the U.S. and elsewhere, but these are much smaller markets.

“South Africa is not really in a position to look for some other markets outside China, because in the world China continues to be the major buyer of wool,” he explained.

When the world’s second largest economy stops importing your product the effects can be devastating.

A Chinese ban on Australian wines as punishment for Canberra’s comments on the origins of COVID-19, hurt that industry.

The South African wool ban is not political retaliation, simply the move of a government concerned about contamination, but the ban has made evident the dangers of importing mainly to one country.

“This is hitting us heavily,” said farmer Makinana.