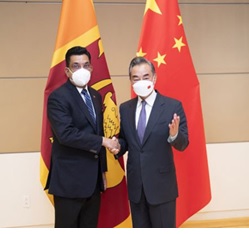 Wickramasinghe government is said to be wary of entering into a Free Trade Agreement (FTA), despite pressure from Beijing.

The issue reportedly figured in the talks Sri Lanka Foreign Minister Ali Sabry had with his Chinese counterpart, Wang Yi on the sidelines of UN General Assembly session in New York.  While there was no mention of FTA in the Sri Lankan read out on the meeting, the Chinese embassy said the two sides had “agreed to speed up the negotiation process and strive for an early conclusion of a Free Trade Agreement (FTA)”.

Both sides had opened FTA talks seven years ago in 2015.  While Sri Lanka has been prevaricating and dragging its feet, China has been very keen on it. Beijing has been even making FTA a condition for continued financial investments in Sri Lanka.

An area of discord, according to Daily Mirror is the zero-tariff syndrome. China wants tariffs on 90 per cent of the goods sold to each other as soon as the FTA is signed but Sri Lanka favours zero tariffs on only half of the traded products initially and expand the zero-tariff regime gradually over 20 years.

Sri Lanka’s demands, economists say, are reasonable from the point of view of a smaller and less-developed economy.

Right now, Sri Lanka’s focus is on managing the on-going economic crisis. It is unlikely to have the time or inclination to start discussing a complex and controversial issue like an FTA with China, says a local media report###.