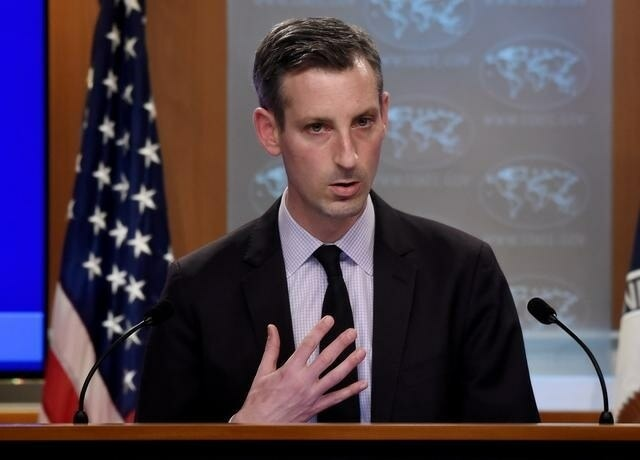 MR PRICE:  Yesterday marked World Refugee Day. I would like to underscore the messages shared by the Secretary and the department acknowledging the unprecedented humanitarian crises across the globe, resulting in the largest number of refugees in history.

For the first time in history, last month the number of people forced to flee conflict, violence, human rights abuses, and persecution reached more than 100 million. That means more than 1 percent of the world’s population has been forcibly displaced.

The United States reaffirms our unwavering commitment to alleviate the suffering of the world’s most vulnerable people through our global leadership in humanitarian assistance and diplomacy.

We are the world’s largest single donor of humanitarian assistance, providing more than $13 billion in humanitarian aid during Fiscal Year 2021.

We also recognize the generosity of communities that host refugees and the united global response of international humanitarian partners who work diligently to help them. …..

QUESTION: Thanks, Ned.  I just wanted to check to see if there had been any change in your policy that either journalism is not a crime or if there’s been any change to the – your belief that Julian Assange is not a journalist.

QUESTION: But it still is your position, as it was on World Press Freedom Day not so long ago, that journalism was not – should not be a crime.

MR PRICE: That is absolutely our conviction, correct.

QUESTION: Ned, New York Times also came out over the weekend with an investigation about the killing of Palestinian American journalist Shireen Abu Akleh. Basically, they are also saying, just like all of the other media outlets who have done similar investigation, that the bullet was fired from the approximate location of the Israeli military convoy. So, I’m just wondering in light of this, like, mounting new information, is the United States going to do anything more to press the Israelis to speed up their investigation, and are you going to do anything differently, maybe like consider conducting your own investigation, since this is a U.S. citizen?

MR PRICE: Humeyra, we have been in close and constant touch with our Israeli and with our Palestinian partners as well. We have sought, in just about all of these conversations, to bridge cooperation between the parties. We want to see the parties cooperate. We believe that enhanced cooperation between Israeli and Palestinians on this investigation will facilitate what is and what should be a collective goal, and that is an investigation that culminates in accountability. That’s what we would like to see happen. …. We expect full accountability for those responsible.

QUESTION: Are you considering conducting your own? And if you’re not, why not?

MR PRICE: …. that is not on the table at the moment. The two parties, the two sides – the Israelis, the Palestinians – are conducting their own investigations. We want to see those investigations be conducted in a way that’s thorough, that’s impartial, that’s transparent, and that culminates in accountability. We believe that can be accomplished most effectively if the two sides share evidence with one another, if they bridge their investigations in that way. …..

QUESTION: …. Now, you believe that Israel’s track record proves that it can conduct a transparent and thorough investigation in this particular case?

MR PRICE: ….. Israel does have the wherewithal to conduct an investigation that is transparent, that is impartial, and that – importantly – culminates in accountability. That’s what we would like to see happen. …… I am speaking for what the United States is asking for, what we seek. We seek an investigation that is transparent, that’s impartial, that culminates in accountability. ….

QUESTION: ….. Now, the collapse of the Israeli coalition, I wonder whether you’d comment on that. ….

MR PRICE: I don’t expect political developments in Israel will have implications for what we are seeking to accomplish together with our Israeli partners or with our Palestinian partners, for that matter. And that’s because Israel is a strategic partner of the United States. It’s a fellow democracy. We respect its democratic processes.

QUESTION: One more on Israel?

QUESTION: You mentioned that the collapse of the Israeli Government isn’t going to have an impact on policy. Where does this – does this mean that President Biden’s promise of a consulate in Jerusalem is going to go unfulfilled? Just because there was a widely assumed belief that the reason that this wasn’t implemented is because the administration feared the collapse of the Israeli Government, so that’s why they weren’t fulfilling Biden’s promise to open a consulate. But it’s collapsed now, so what – where are we in this process? What – is that actually going to happen?

QUESTION: Thank you. Mr. Price, two question. One question about Daesh/ISIS activity in Afghanistan. They killed so many people, including Hindus. It was very big tragedy.   And the other question about the Taliban leadership’s travel sanction. Are they allowed to travel to so many countries? People concerned, especially human rights organizations.

MR PRICE: Let me take the first one first.  Of course, we all saw these horrifying reports over the weekend. We – as you heard from several of our senior officials, we’ve condemned the recent attacks that have killed and harmed civilians in Afghanistan. This includes the cowardly attack that we saw this weekend against the Sikh community in Kabul that claimed innocent lives, including the life of a Sikh worshipper.

But again, this was more than one attack. What we are seeing here appears to be a pattern on the part of terrorists, on the part of extremists, who are striking at the heart of Afghanistan’s pluralistic identity, who are striking against Hindus and Sikhs, and we must – those perpetrators must be held accountable, and members of all minority groups should be protected.

In terms of the travel of senior Taliban officials, this is something that’s been discussed at the UN in recent days. And in line with the Security Council’s ongoing consideration of the situation in Afghanistan and council actions in support of the Afghan people, the council, as you may know, removed from the 1988 travel ban exemption list two individuals who oversee education policy for the Taliban. With this step, this list now has 13 individuals on it. So, in other words, these individuals who are responsible for the Taliban’s education policy are no longer exempted from the inability of senior Taliban officials to travel beyond Afghanistan’s borders.

We proposed that the Security Council take this step to signal to the Taliban in no uncertain terms that its decision to prohibit girls from obtaining secondary education has consequences, including very practical consequences like this. Through press statements, the council has expressed deep concerns regarding the erosion of the respect for human rights in Afghanistan, including for the rights of women, girls, other minority groups in Afghanistan.

So, we will continue to coordinate very closely with our partners at the UN and other stakeholders to hold to account those who are responsible, not only for the violent attacks that we’ve seen inside Afghanistan but for all those who would seek to erode the rights and protections that are afforded to Afghanistan’s minorities……….

QUESTION:   Ned, on the global food insecurity, what is the U.S. doing to help ease the situation globally and in the Middle East specifically?

MR PRICE: Well, we’ve had an opportunity to speak about food security quite a bit recently, including when Secretary Blinken convened a number of his fellow ministers – about 40 ministers – in New York last month at the UN General Assembly and the UN Security Council. This was a challenge that in some ways predates the Russian aggression, but there – certainly it is a challenge that has been compounded by what we call the three Cs: by COVID, by climate change, and now by conflict. And the fact is — unfortunately, it is that final C, conflict, that has had an outsized implication for not only the region but also for much of the world. The fact is that Russia’s forces have attacked, they have taken offline grain silos. They are attacking Ukraine’s farmers. They are leaving Ukraine’s wheat fields and its other plots of arable land unusable. There is – there has been an effort to pursue Ukrainian ships at sea that have been carrying grain. And, of course, there is an ongoing blockade with ships now stuck in port that have some 20, 25 million tons of grain that countries around the world, including in the region but also well beyond the region, including in Africa and, as we heard recently at the Summit of the Americas in Los Angeles, is needed in the Western Hemisphere as well.

So, we’ve produced a global action plan that focuses on five lines of effort. ……

QUESTION: Move to PRC, China. Give us your comments about China’s claim of successful anti-ballistic missile interceptor test on Sunday as well as recent launch of domestically designed aircraft carrier.

Secondly, does the United States see the Taiwan Strait as international water?

QUESTION: Also, a follow-up to the opening up the consulate in Jerusalem. Why does reopening take so long? Like, what is the obstacle there? It’s just reopening the building. Like, transferring the U.S. embassy from Tel Aviv to Jerusalem did not take that long. What is preventing you from reopening the embassy?

MR PRICE: Obviously, these are complex issues. These are issues that we need to coordinate with the Government of Israel as well, but it’s an issue that we are committed to and we’re continuing to discuss that with our Israeli partners, with our Palestinian partners.

QUESTION: Why should you coordinate with the Israelis while you are opening a consulate for Palestinians?

MR PRICE: Because this will be in Jerusalem.

QUESTION: So wait a minute, again, but you – Jerusalem, as far as your policy is concerned, is divided.

QUESTION: You would not acknowledge that Israel —