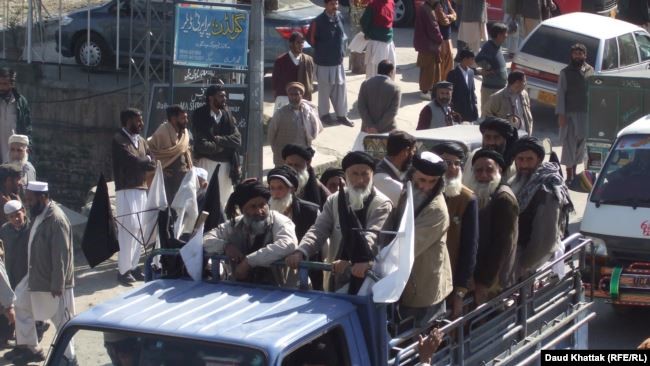 Years ago, Pakistan declared victory against the Taliban after large-scale military operations in a north-western mountainous region.

But the Tehrik-e Taliban Pakistan (TTP), the formal name of the Pakistani Taliban’s umbrella organization, is now back in parts of Malakand Division, an administrative region of Khyber Pakhtunkhwa Province, where thousands were killed and millions displaced during years of Taliban control and military operations.

In parts of Lower Dir, one of the nine Malakand districts, residents guard their houses as bands of armed men patrol at night.

“Their faces are covered. They appear in groups of six to eight men,” said a resident of Lal Kala village in the Maidan area of Lower Dir who requested anonymity because he feared reprisals. “Some villagers say they are thieves and robbers, while others say they are Taliban fighters.”

He told Radio Mashaal that the bombing of a cell phone tower in Maidan earlier this month terrified residents. “We heard a loud bang late at night, but nobody dared go out,” he said. “In the morning, we discovered that a cell phone company’s [transmission] tower had been blown up.”

While the incident and the Taliban’s creeping reemergence have not made headlines in the Pakistani media, locals are alarmed. Lower Dir is the sixth of Khyber Pakhtunkhwa’s 35 districts where the TTP has marked its return with the intimidation of locals, targeted killings, and attacks on security forces over the past two years. The group returned to the nearby district of Buner last year, and in the neighboring Bajaur and Mohmand districts the Taliban has forced local businesses to pay protection money.

Lower Dir served as the bastion for Maulana Sufi Muhammad, the late hard-line cleric who founded Tehrik-e Nifaz-e Shariat-e Muhammadi (TNSM or the Movement for the Implementation of Shari’a), an armed uprising to demand the imposition of Islamic Shari’a law in the early 1990s. His fiery speeches inspired thousands to cross into Afghanistan as a U.S.-led international military alliance toppled the Taliban regime.

Nearly 15 years ago, his son-in-law Mullah Fazlullah led a Taliban rebellion in neighboring Swat district, where he ruled tyrannically before a 2009 military operation forced him into Afghanistan. Fazlullah was eventually killed in a U.S. drone strike in the eastern Afghan province of Kunar, which borders Lower Dir, in 2018.

On October 1, unidentified assailants shot dead a schoolteacher in Galgut village. Waqas Khan, a resident, told Gandhara that 30-year-old Saeedullah was driving the car of local Pakistan Peoples Party (PPP) leader Attaullah Khan when he came under attack. Waqas and other residents maintain the politician had been the real target.

Businessmen and politicians have started to flee Lower Dir because of Taliban threats. Abdullah Shah, an elected local representative of the ruling Pakistan Tehrik-e-Insaaf (PTI) party, reportedly received a threatening letter a month ago that prompted him to move to the provincial capital, Peshawar, some 200 kilometers away.

Requesting anonymity, several locals confirmed to Radio Mashaal that armed men had dropped a letter at Shah’s gas station in Lower Dir’s Markhanri area in September. They said the letter asked him to appear for “negotiations” with the Taliban.

“Weeks after the letters, unidentified people fired rockets at his house,” one local told Radio Mashaal. The police also found an unexploded roadside bomb near his village.

Radio Mashaal attempted to reach Shah for comment but was not successful because his landline and mobile phone numbers were not working.

Shah Khalid, a college lecturer in Lower Dir, told Radio Mashaal that he has received death threats from the Taliban in recent weeks.

“They warned me to stop campaigning against the Taliban, otherwise I will be targeted,” he said, adding he reported the harassment to the police. “I said if they [the police] fail to take action, they cannot blame us for the Taliban’s return.”

Jabir Khan, a student and rights activist in Lower Dir, accused officials of keeping mum in response to Taliban threats even when two policemen guarding a polio team were killed in Lal Kala in December.

In a similar incident, armed motorcyclists killed a public prosecutor, Muhammad Saeed, in the Chakdara Khas area of Lower Dir in October 2019 and escaped.

Khan says police are not taking such attacks seriously enough. “Instead of taking action, the police are using megaphones to warn locals against allowing militants in their houses,” he told Radio Mashaal.

Disappointment with the police is widespread in Lower Dir. In a Facebook video, Haji Fazal Wahab, a local political leader, complained about the government’s apathy in protecting them from the resurgent militants. He questioned how the Taliban could return to Dir when the government boasts of ending militancy in the region by improving security on the country’s western border with Afghanistan.

“We don’t know how these armed men manage to enter from Afghanistan despite all the security measures, including fencing at the border,” Wahab told an October 11 gathering attended by senior police and administration officials in Dir. “How can the terrorists get here when there are check posts everywhere? The people here will stand behind you if you stand with us.”

In recent years, Islamabad spent hundreds of millions of dollars to fence the rugged Durand Line border, more than 2,500 kilometers long, between Pakistan and Afghanistan. Islamabad says fencing is required to stop militants moving across the border.

Ijaz Khan, a deputy inspector general of police in Malakand Division, told Gandhara that police have prepared a plan to stop the “miscreants” from disturbing the peace. Repeating a standard government line, he alleged that Afghanistan and Pakistan’s neighboring archrival India is behind the Pakistani Taliban’s revival.

Lawmaker Malik Shafiullah, a leader of the ruling PTI, acknowledged the militants have resurfaced in Lower Dir and are behind some recent attacks. “The government will try to restore security because it is a fundamental right of our people,” he said. “The police are working against the militants 24/7 and are determined to cleanse this region of their presence.”

In Lower Dir, however, the Taliban makes its presence felt with every passing day. Letters signed by commander Hafeezullah, alias Kochwan, heighten the atmosphere of fear. “Anyone found cooperating with the government will face the consequences,” warned one of the handwritten night letters obtained by Radio Mashaal. Another letter termed the Pakistani government apostate and called on it to surrender to the Taliban.

Hundreds of kilometers south, South Waziristan and North Waziristan remain the districts of Khyber Pakhtunkhwa most affected by the Taliban’s return. This year, dozens of soldiers and civilians have been killed in suicide bombing and targeted assassinations. The Taliban either claimed credit for these attacks or was blamed by the government for the spike in violence.