As Maharashtra—in fact, the whole country—awaits curtain coming down on the high political drama in Mumbai, a thing to watch will be whether Udhav Thackeray will be able to retain his grip over Shiv Sena. He inherited the party’s mantle and control from Balasaheb Thackeray, his father, despite resentment from some members of his own family.

Rebel Shiv Sena member, Eknath Shinde has challenged his position as the head of the party even as he corals majority support, sitting thousands of kilometers away in Assam, from among Shiv Sena legislators as well as Independents to dethrone Udhav and end the two- and half-year rule of the tri-party (Shiv Sena, NCP and Congress) coalition in the state.

It is almost unanimously accepted that the days of the Udhav Thackeray government are numbered even though the optimists expect some ‘political miracle’ to save it on some technical or legal ground.

Since miracles are not an everyday affair, Udhav Thackeray himself has taken the precaution of vacating his official bungalow much ahead of the day of the reckoning.

The BJP can hardly contain its happiness over what seems to be inevitable in Maharashtra. If the MVA government falls, it may also lead to near rout of Shiv Sena as it has existed since the 1960s. The BJP would have succeeded in almost eliminating a strong political rival in Maharashtra, just as it has all but wiped out Bahujan Samaj Party in UP.

Shinde feels assured of success with BJP’s not so covert support and the Assam chief minister, Hemant Biswa Sarma, looking after the rebel MLAs from Maharashtra even at the cost of being accused of neglecting the welfare of the flood-affected people of Assam. The Assam CM provided a bit of comic relief when he said that he was not aware of the presence of Maharashtra MLAs in his state even his convoy was filmed entering the hotel where the legislators were confined! Incidentally, he had also said that he had not heard about the Gujarat fire brand MLA Jignesh Mewani when he was arrested by Gujarat police in Assam.

One time auto driver and now believed to be the owner of assets worth crores of rupees, Shinde’s claim of support of the majority of Shiv Sena members suggests that he wants to be accepted as the leader of ‘true’ Shiv Sena. If his claim is accepted legally Udhav Thackeray will no longer be the leader of the party which prides itself as the ‘true’ representatives of the Marathi Manoos. 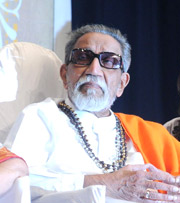 The party’s origin can also be traced to its pursuit of extreme ‘Hindutva’. Recall Shiv Sena’s oft-repeated claim that the Babri mosque was demolished by its Sainiks. The rebel Shiv Sena members have suddenly recalled their Hindutva identity and how it has been weakened by associating Shiv Sena with the ‘secular’ NCP and the Congress.

The ‘ownership’ of Shiv Sena may change hands but what has to be seen is if it continues to be accepted by a majority of Marathi Manoos, considering that till the current turmoil, Shiv Sena followers have tended to be loyal to the elder son of Balasaheb Thackeray.

An embittered Udhav Thackeray and his supporters will be ready for prolonged battles because that is something the Shiv Sena had mastered in its initial years when the targets were, first, the South Indians and then the other non-Marathi population. That role was softened subsequently for political reasons.

According to Maharashtra observers and media reports, a good number of Shiv Sena rebels had asked Udhav Thackeray to restore the old fraternal ties with the BJP and jettison the MVA partners to bring back a Shiv Sena-BJP government.

Interestingly, many Shiv Sena members who had a humble beginning have become millionaires after becoming active in the party—becoming municipal councilors, MLAs and ministers. They are vulnerable to BJP pressure, as is said to be visible during the current crisis.

The Shi Sena rebels have seen several examples of how entering the BJP fold brings instant relief from the fear of arrest and prosecution by the central agencies.  One prominent ex-Shiv Sena leader reportedly said publicly that he was able to sleep well after joining the BJP; he no longer has to worry about things like ED or IT notices.

Of course, it is a poor reflection on the Shiv Sena itself that it had not checked its members from acquiring wealth from questionable means even when fully aware of it. Party observers say that the Shiv Sena leadership did not bother about it as long as the party’s coffer kept bulging. (SAT)