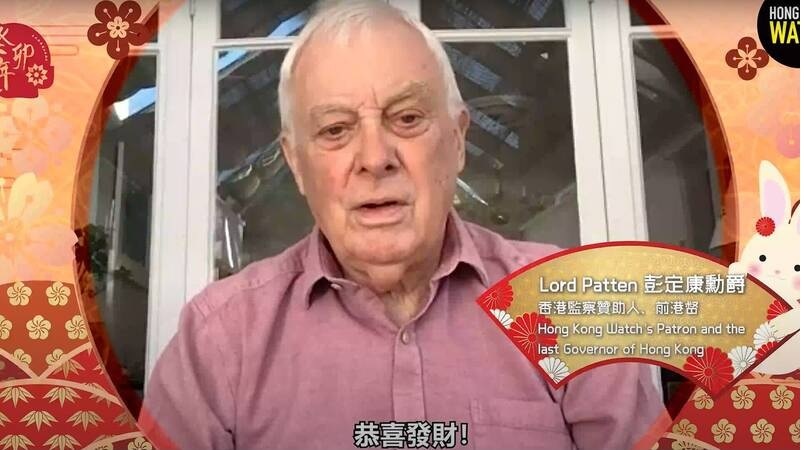 Home » News » The CCP will disappear in history sooner or later, says Chris Patten, the last governor of Hong Kong

Chris Patten, the last governor of Hong Kong, who was regarded as a thorn in the side of the Chinese government, sent New Year greetings to Hong Kong people around the world in Cantonese through the YouTube channel of “Hong Kong Watch”, and emphasized that the CCP suppressed Hong Kong Freedom, which does many evils, will disappear in history sooner or later.

Based on the reports of “Hong Kong 01” and other reports, in this video, the soundtrack of “Glory to Hong Kong”, which is regarded as “Hong Kong Independence” song by the Hong Kong authorities, Patten, the patron of “Hong Kong Monitor”, is wearing a pink shirt. Greet Hong Kong people with “Gong Xi Fa Cai” in Cantonese, and wish Hong Kong people all over the world “Happy New Year, and the Jade Rabbit welcomes the spring with joy. I hope the Year of the Rabbit will indeed bring longevity, peace and prosperity.”

Patten expressed his gratitude to Hong Kong people who have emigrated overseas: “Some of you have had to go into exile, move to the UK or other countries, and have made great contributions to the country that you now call home…I want to thank you for what you have done in the emigrated country Everything, especially the UK of course.”

Patten also sent his best wishes to Hong Kong people who are still in Hong Kong: “I love Hong Kong and I am very sad to see what happened to her (Hong Kong), but I firmly believe like many people that we will always miss you.”

Chris Patten criticized, “The CCP is aggressively suppressing Hong Kong’s freedom, and Beijing’s friends from the United Front are accomplices, doing a lot of evil in Hong Kong.” However, he firmly believes that the dictatorship and its actions will always have consequences. “Sooner or later, they will disappear in history. I Think Hong Kong stands for values that will outlast any dictatorship anywhere, including the CCP.”