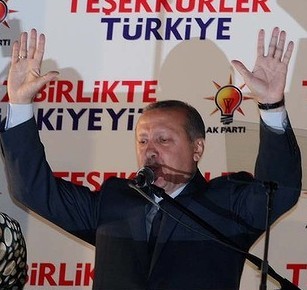 The electorate did not reward AKP with the two-thirds majority in the 550-member Parliament (Türkiye Büyük Millet Meclisi, Grand National Assembly of Turkey). The tally of 326 seats is, however, an improvement over its strength (331seats) in the outgoing parliament. Just 4 more seats would have given Erdogan the majority to pass the constitutional amendments laid out in the constitutional reform bill, which passed a referendum last year, without any opposition support.

One way to interpret the vote is that AKP didn’t inspire sufficient confidence among urban, secular Turks to be entrusted to draft the new constitution on its own.

The hard-line Nationalist Action Party, the MHP, has lost some ground. It bagged just 13.1 per cent vote. The main opposition Republican People’s Party (CHP) has reasons to feel happy. It has come second in the electoral sweep stakes and increased its vote share to 25.9 per cent. The Kurdish block has managed to send 36 outspoken Kurdish activists to Parliament though it didn’t increase its vote share. More than 50 million people were covered in the vote out of a population of some 73 million.

Prime Minister Erdogan’s popularity is largely because of the economic miracle he has achieved. From the sick-man of Europe with high inflation and violent boom-bust cycles, Turkey is now the fastest growing economy in Europe, and also one of the most stable.

The Turkish economy grew by 8.9 per cent in 2010, outpacing global recovery; it was the second highest among G-20 nations after China. Turkey’s per capita income has doubled to $10,079. Its foreign exchange reserves are in excess of $91bn. Exports total $114bn.

In the last 8 years the AK Party has turned around the fortunes of Turkey;. This led to the predictions from analysts that an AK Party victory in the election was all but a foregone conclusion.

Erdogan’s target is making Turkey one of the word’s ten largest economies by 2023. Turkey can be expected to redouble efforts for entry into EU. The bid has been stalled thus far partly by opposition from Germany and France.

In his victory speech, Erdogan has promised to be humble and work on consensus building ‘with the main opposition, the opposition, parties outside of parliament, the media, NGOs, with academics, with anyone who has something to say’. Observers will be keenly watching how he would go about fulfilling this promise. A new and more democratic constitution is one of his poll planks. The present statute was drafted under a military government 30 years ago.

Erdogan rule has seen sharp reduction in the political clout of the military. This became clear on May 30 when a serving general, Bilgin Balanli, and several other serving and retired officers were convicted for a 2003 plot to overthrow the elected government and replace it with a military dictatorship.

Erdogan is a strong advocate of presidential system but did not go ahead for fear of losing the votes. “He is now free to implement his policies. He seems to be going toward a presidency,” opines Political scientist Ilter Turan, a professor at Istanbul’s Bilgi University. It is bound to stir a controversy as his critics fear tha as President Erdogan will seek to stay in power for many years to come.

Turkish presidents are elected for up to two five-year terms. If Erdogan becomes President in 2015, his second term will begin in 2020. That would mean he would be presiding over Turkey’s anniversary celebrations in 2023. He’ll only be 69 then.