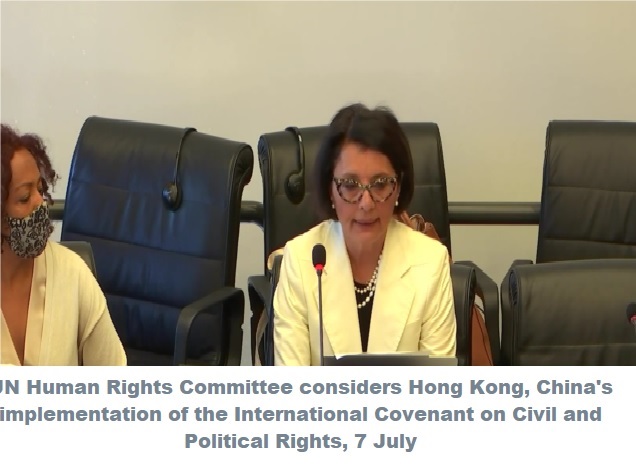 The U.N. Human Rights Committee on Wednesday (27 July) demanded that the Hong Kong SAR government take action to repeal the Hong Kong National Security Law and halt its enforcement until it is repealed.

The committee expressed deep concern about the consequences of the hasty implementation of the Hong Kong National Security Law. “Since the enactment of the law in 2020, more than 200 people, including 12 children, have reportedly been arrested for endangering national security; Of these, the 44 convictions of 12 persons under the National Security Act were not based on the four categories of offences provided for in the Act. ”

The committee asked the Government of the Hong Kong Special Administrative Region of China to “take concrete steps to repeal the existing National Security Law and, in the meantime, to avoid implementing the Law.”

The United Nations Human Rights Committee is the body that oversees the implementation of the United Nations International Covenant on Civil and Political Rights. Hong Kong was already a party to the convention before its return to China in 1997.

On Wednesday (27 July), the committee published its Concluding Observations after three days of deliberations on the fourth implementation report submitted by Hong Kong.

“It’s very, very strong language.” Kong Jierong, one of the top Chinese legal experts in the United States and a professor at New York University School of Law, said. “There is no diplomatic rhetoric, and it is straightforward to tell Hong Kong to get rid of the National Security Law.” This is very unusual. He said.

The committee also asked Hong Kong not to take any action that could restrict freedom of association and to ensure that members of civil society are not prosecuted under the National Security Law for their participation in the current U.N. review.

During the deliberations, the members raised the question of whether the citizen organizations involved in the review would be charged by the National Security Law at least three times. But the responses of Hong Kong government representatives show that they have not guaranteed that under the National Security Law, these civil society participating in the deliberations of the United Nations human rights body will not be charged. They did not even answer the question of whether the members of the UN Human Rights Committee who participated in the review were “foreign forces”.

While the Concluding Observations are “an impressive work done by some of the world’s leading human rights experts,” Mr. Kong worries that many Hong Kongers may not be aware of the document.

Reuters reported that when Hong Kong returned to Chinese rule in 1997, it was guaranteed a high degree of autonomy, including freedom of speech, under the “one country, two systems” model. But critics say that autonomy has been rapidly eroded since the enactment of the Bill of State.

“Hong Kong’s tighter security regime reflects the harsh crackdown on dissenting activists by Chinese leader Xi Jinping over the past decade, imprisoning critics and activists across the country.”

“The Committee’s review and concluding observations are part of the ongoing United Nations review process aimed at promoting compliance with treaty obligations under the United Nations International Covenant on Civil and Political Rights. This is not a one-time operation, nor does it depend on the political will of the HKSAR government, which is obligated to respond and comply with the convention,” said Tam, executive director of Chinese Rights.

“The international community’s commitment to ensuring the effectiveness of these recommendations is not over. It monitors the actions that the Government of the Hong Kong Special Administrative Region must take to implement three specific recommendations and reports to the Committee by 28 July 2025 on repealing the National Security Act, ensuring freedom of expression, and ending any restrictions on freedom of association. Tan added.. (VOA report)###