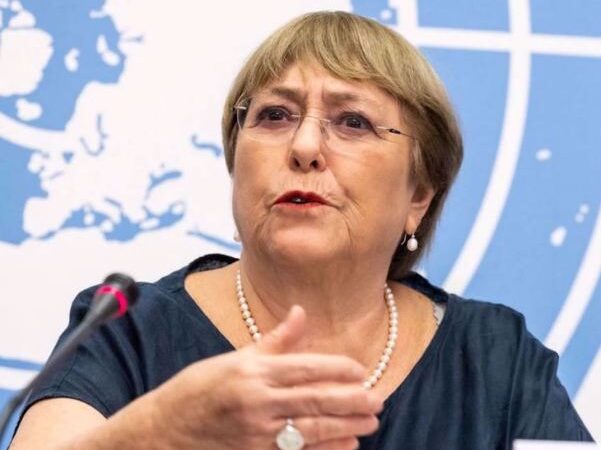 China’s repression of Uyghurs and other Turkic minorities in its western Xinjiang province “may constitute international crimes, in particular crimes against humanity,” the U.N.’s human rights chief said Wednesday in a long-awaited report issued on her last day on the job.

The report issued by U.N. High Commissioner of Human Rights Michelle Bachelet says that “serious human rights violations” have been committed in the Xinjiang Uyghur Autonomous Region (XUAR) in the context of the Chinese government’s application of counter-terrorism and counter-“extremism” strategies.

“The implementation of these strategies, and associated policies in XUAR has led to interlocking patterns of severe and undue restrictions on a wide range of human rights,” the report states.

“These patterns of restrictions are characterized by a discriminatory component, as the underlying acts often directly or indirectly affect Uyghur and other predominantly Muslim communities.”

The 46-page report goes on to say that the human rights violations documented in the Office of the High Commissioner for Human Rights’ (OHCHR) assessment, flow from “a domestic ‘anti-terrorism law system’ that is deeply problematic from the perspective of international human rights norms and standards.”

The system contains vague and open-ended concepts that give officials wide discretion to interpret and apply broad investigative, preventive and coercive powers, amid limited safeguards and little independent oversight, the report says.

“This framework, which is vulnerable to discriminatory application, has in practice led to the large-scale arbitrary deprivation of liberty of members of Uyghur and other predominantly Muslim communities in XUAR in so-called [vocational education and training centers] and other facilities, at least between 2017 and 2019,” it says.

The OHCHR based its assessment in part on 40 in-depth interviews with individuals with direct and first-hand knowledge of the situation in Xinjiang, 26 of whom said they had been detained or had worked in various facilities across the region since 2016. In each case, OHCHR assessed the reliability and credibility of these persons, the report says.

The report covers the period during which Chinese authorities arbitrarily detained up to 1.8 million Uyghurs and other Turkic minorities in internment camps in Xinjiang, according to numerous investigative reports by rights groups, researchers, foreign media and think tanks.

The predominantly Muslim groups have also been subjected to torture, forced sterilizations and forced labor, as well as the eradication of their linguistic, cultural and religious traditions, in what the United States and several Western parliaments have called genocide and crimes against humanity.

“Even if the [vocational education and training centers, or VETC] system has since been reduced in scope or wound up, as the government has claimed, the laws and policies that underpin it remain in place,” the report says. “There appears to be a parallel trend of an increased number and length of imprisonments occurring through criminal justice processes, suggesting that the focus of deprivation of liberty detentions has shifted towards imprisonment, on purported grounds of counter-terrorism and counter-‘extremism.’”

The information available to OHCHR on implementation of the government’s stated drive against terrorism and ‘extremism’ in XUAR in the period 2017- 2019 and potentially thereafter, also raises concerns from the perspective of international criminal law, the report says.

“The extent of arbitrary and discriminatory detention of members of Uyghur and other predominantly Muslim groups, pursuant to law and policy, in context of restrictions and deprivation more generally of fundamental rights enjoyed individually and collectively, may constitute international crimes, in particular crimes against humanity,” it states.

OHCHR’s report makes 13 recommendations to the Chinese government, including promptly releasing those detained arbitrarily in VETCs, prisons or other detention facilities.

It also recommends that China release details about the location of Uyghurs in the XUAR who have been out of touch with relatives abroad, establish safe means of communication for them, and allow travel so families can be reunited.

The report also recommends that China investigate allegations of human rights abuses in the VETCs, including allegations of torture, sexual violence, forced labor and deaths in custody.

China’s Permanent Mission to the U.N. Office at Geneva was quick to dismiss Bachelet’s report.

“The United Nations Human Rights Council should use the report to initiate a comprehensive investigation into the Chinese government’s crimes against humanity targeting the Uyghurs and others – and hold those responsible to account,” she said in an emailed statement.

Speaking in an interview with RFA Uyghur, Richardson said that Bachelet’s report is “not the report Xi Jinping wanted a month before the 20th Party Congress,” when the CCP leader will seek an unprecedented third term in office, following constitutional amendments in March 2018 removing presidential term limits.

“But it’s the report that is essential, we think, to mobilizing international support for actual investigations and accountability,” she said.

“This report obliges Human Rights Council member states, and indeed other states too, to urgently respond. This is a sober assessment of serious human rights violations committed by a powerful state and it is imperative that they respond to that the way they would to violations anywhere.”

Adrian Zenz, a researcher at the Washington, D.C.-based Victims of Communism Memorial Foundation and expert on the Xinjiang region, welcomed the report’s findings on arbitrary detention and internment camps, but called it “comparatively weak” on issues such as forced labor, birth control, and sterilization.

“It’s not strong in every regard, but it is a very good start,” he told RFA. “I don’t think it’s the best possible outcome, but given the circumstances, it’s better than what could have been … This report is going to be a very good resource … to cite, for governments. It’s going to put China under significant pressure in my opinion, but it’s one step at a time.”

But he questioned why Bachelet waited until the end of her term to issue the report and had remained largely silent on the situation in Xinjiang while in office, calling her failure to exert pressure on Beijing “a huge missed opportunity.”

“All eyes are going to be looking to her successor to see what’s going to happen,” he said.

The report’s findings were also welcomed by a group of 60 Uyghur organizations from 20 countries, who said that global governments, multilateral bodies, and corporations should use it as the basis for concrete actions aimed at ending atrocities in Xinjiang.

“Despite the Chinese government’s strenuous denials, the UN has now officially recognized that horrific crimes are occurring,” he said.

The groups called for the U.N. Human Rights Council to take up the issue in a special session with the aim of establishing a Commission of Inquiry into the treatment of Uyghurs, the U.N. Special Procedures to respond to the report with recommendations for the international community, and the U.N. Office on Genocide Prevention to immediately assess the risks of atrocities in Xinjiang.

They also called for the International Labor Organization and UNESCO to launch investigations into the report’s findings, the global business community to cut all ties with entities assisting Beijing in carrying out the atrocities, and governments and international organizations to take steps to protect Uyghurs at imminent risk of refoulement.

Bachelet, a former Chilean president, told reporters at a press conference on Aug. 25 in Geneva that her office was trying to complete the report before the end of her four-year term on Aug. 31 but that it still had to review input from the Chinese government.

Bachelet first told the U.N. Human Rights Council in September 2021 that her office was finalizing its assessment of information on allegations of rights violations in Xinjiang, but delays followed. Three months later, a spokesperson said the report would be issued in a matter of weeks, but it was not, much to the dismay of Uyghur activists and rights groups.

The rights chief visited China, including the towns of Ghulja (in Chinese, Yining) and Kashgar (Kashi) in Xinjiang in late May, but angered rights groups again who accused her of repeating  Chinese talking points during a news conference at the end of her trip and failing to denounce the repression Uyghurs face there as a genocide.

In June, nearly 50 U.N. member states issued a statement criticizing China’s atrocities against Uyghurs and called on Bachelet to release the Xinjiang report, while Uyghur rights organizations continued to urge her to do the same.

A letter written by China that expressed “grave concern” about the Xinjiang report was circulated among diplomatic missions, asking other countries to sign it to show their support for China’s goal of convincing Bachelet to halt its release, Reuters reported in July from Geneva.

On Thursday, the U.S. and other governments welcomed the report.

“The United States welcomes this important report, which describes authoritatively the appalling treatment and abuses of Uyghurs and members of other ethnic and religious minority groups by the government of the People’s Republic of China (PRC),” U.S. Secretary of State Antony Blinken said in a statement.

“This report deepens and reaffirms our grave concern regarding the ongoing genocide and crimes against humanity that PRC government authorities are perpetrating against Uyghurs, who are predominantly Muslim, and members of other ethnic and religious minority groups in Xinjiang,” he said.

The U.S. would work closely with its partners, civil society and the international community to seek justice and accountability for Uyghur victims and continue to hold China to account, Blinken added.

U.K. Foreign Secretary Liz Truss said the report provided new evidence of “the appalling extent of China’s efforts to silence and repress Uyghurs and other minorities in Xinjiang.”

“It includes harrowing evidence, including first-hand accounts from victims, that shames China in the eyes of the international community, including actions that may amount to crimes against humanity,” she said in a statement, adding that U.N. member states must now be given the opportunity to consider the report fully.###