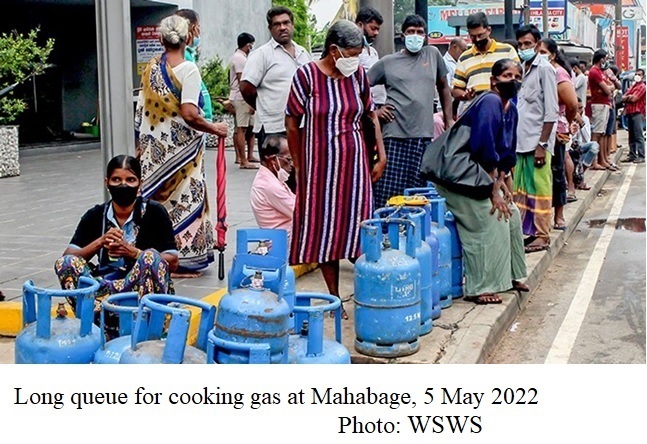 A UN survey entitled “Humanitarian Needs and Priorities—Food Security Crisis Sri Lanka” paints a tragic picture of the social devastation in the island nation.
“Sri Lanka is experiencing a multi-dimensional crisis, compounded by food insecurity, threatened livelihoods, shortages of essential medical items and rising protection concerns,” the 39-page report issued on June 9 stated.
After months of strikes and protests over shortages of essential items, escalating inflation and extended power cuts, mass demonstrations erupted in early April across the island demanding the ouster of President Gotabhaya Rajapakse and his government. These were followed by one-day general strikes on April 28 and May 6.
In her foreword to the report, UN Residential Coordinator in Sri Lanka Hanaa Singer Hamdy revealed that about 5.7 million people, or around 22 percent of the total population, needs urgent humanitarian assistance. There is an “unfolding multi-dimensional food security crisis,” she wrote, with “many families unable to afford basic food commodities,” and “up to 70 percent of households having to reduce food consumption, including by skipping meals.”
Inflation and a sharp decline in the country’s agricultural products means that “low-income families face severe threat of food security.” This has worsened over the last two years with a 73 percent increase in the cost of food items. The annualised food inflation rate climbed steeply last month to 57.4 percent, Hamdy said.
Unable to afford the rising prices, people have resorted to various “coping mechanisms,” such as borrowing money, withdrawing savings, pawning belongings and selling property to make ends meet.
“The number of households that borrowed money has significantly increased, from 40 percent in August 2021 to 68 percent in April 2022,” Hamdy stated. Such mechanisms, she added, “are not sustainable over the long term and will lead to greater losses in the future.”
Citing a World Food Program assessment, the UN report said that the highest risk of food insecurity is in households relying on “unskilled casual labor, fishing, and those without home gardens and livestock. Estate and urban poor, including migrants, are considered disproportionately affected.”
The report indicated that 73 percent of households surveyed had seen a reduction in income over the past two years, including 11 percent who had received no income over that period.
The UN report stated that the health sector is among the most severely impacted. Sri Lanka imports about 80 percent of its medicines, but depleted foreign reserves have prevented many vital medicines being imported. “The shortage of medicines has paralysed about 50 percent of medical operations in the country. Only urgent surgeries are performed, as some of the medical equipment and anaesthesia are quickly running out,” the report said.
According to surveys cited in the report, stocks of about 200 essential drugs, including blood-thinners for heart attacks, antibiotics, vaccines and cancer chemotherapy, will be depleted in the next three months. Over 2,720 essential surgical consumables and more than 250 regular laboratory items are already out of stock. It warned, “There is an urgent need to replenish essential medicines and medical supplies” in order to protect lives and prevent more deaths. The crisis has been exacerbated by the lack of fuel and extended power cuts.
“The shortage of essential medicines is also limiting the availability and access to life-serving sexual and reproductive health services,” the UN report stated, under conditions in which there will be an estimated 72,000 births in the next three months.
The poor nutritional situation in Sri Lanka has deteriorated as a result of high food costs, the breakdown of supply chains and consequent disruptions in government nutritional support programs. The purchase of diverse food groups, the report stated, “is becoming increasingly unaffordable and out of reach for most low-income households. Pregnant and lactating women are particularly at risk because the majority cannot purchase the required nutritious food.”
Citing other surveys, the UN report stated, “Low-nutrition diets among children under-five places Sri Lanka among the ten worst low- and middle-income countries in the world.”
Prior to COVID-19, Sri Lanka recorded stunting rates of 17.3 percent, wasting of 15 percent and under-weights of 20.5 percent among children under five years of age. The UN report revealed that as of April 2022, the monthly costs of a nutritious diet per household had increased by 156 percent and that at least 56,000 children under 5 are suffering from severe acute malnutrition.
The number of children going to school without breakfast has also considerably increased this year and schools, due to lack of funds, are unable to provide free, nutritious meals.
Other indices of the catastrophic situation showed that 66.3 percent of households in plantation estates do not have safe drinking water and over 48.5 percent of households in Sri Lanka do not practice any water treatment methods, such as boiling or chlorinating. Limited fuel supplies to cook food means many households have stopped treating water at their homes.
Rural areas are facing serious crop failures caused by the Rajapakse government’s bans on imported chemical fertiliser due to the lack of foreign exchange. Paddy production has fallen by about 50 percent and maize by 35 to 70 percent leading to major financial problems for the rural masses, pushing up prices and causing food shortages.
Residential Coordinator Hamdy said that while 5.7 million people need humanitarian assistance in Sri Lanka, the UN program would only target 1.7 million of the most vulnerable, and that it needed $US47.2 million. The UN Humanitarian Country Team has appealed to international organisations to donate funds.
“If we don’t act now—we will see Sri Lanka slide into a humanitarian crisis,” Hamdy added. She said the UN was responding swiftly in response to requests from Prime Minister Ranil Wickremesinghe for “multi-sectoral international assistance.”
Last week, Wickremesinghe telephoned IMF managing director Kristalina Georgieva to finalise talks for a bailout loan. The IMF has insisted that any loan program is dependent on Colombo’s austerity measures.