Uzra Zeya, an under-secretary for civilian security, democracy, and human rights of the US government, is also a special coordinator for Tibetan issues for the Joe Biden administration. She arrived in Kathmandu Friday from India where her meetings with Tibetan leaders in Dharamshala, including the Dalai Lama, were making headlines. 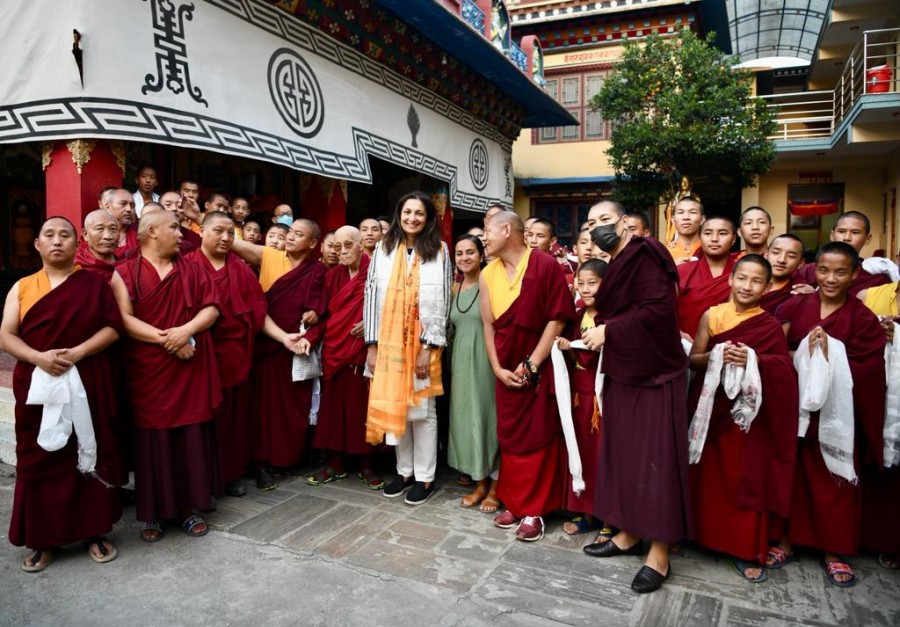 As soon as Zeya arrived in Kathmandu on Friday, she awarded the International Women of Courage to Bhumika Shrestha and Muskan Khatun, according to the US Embassy in Kathmandu.

According to security officials, the meeting lasted over an hour and the US official listened to the concerns of Tibetan refugees in Nepal.

Before visiting the Jawalakhel-based Tibetan camp, she also held a meeting with some human rights defenders and discussed the issues related to Tibetan refugees and the problems faced by them.

On Saturday evening, she visited the Bouddha area where a large section of Tibetan refugees lives. She posted a picture on Twitter, saying: “Honored to visit the impressive Boudha Stupa during my visit to Nepal. What an awesome example of Nepal’s rich religious, architectural, and cultural history.”

According to a Tibetan refugee leader, Zeya will also visit some more Tibetan camps in Kathmandu before wrapping her Nepal visit.

“Primarily we have raised the problems we are facing here [in Nepal] in the absence of documentation and refugee identity cards,” the Tibetan refugee leader told the Post on the condition of anonymity.

The refugee community says that as many as 7,000 Tibetan refugees are deprived of the refugee identity cards which has caused difficulties for them in doing business and jobs, pursuing higher education, visiting abroad, and in engaging in other social activities.

Nepal is home to about 15,000 Tibetans who fled Tibet after the 1959 failed uprising.

Nepal government has always shown extra sensitivity to address China’s concerns, which is evident from the crackdowns on the Tibetans during some occasions like the Dalai Lama’s birthday and the anniversary of the failed Tibetan uprising. The US, on the other hand, has always pressed Nepal to uphold Tibetans’ human and economic rights.

Observers say Zeya’s meeting with Tibetan refugee leaders at a time when Kathmandu is already running the risk of falling into a geopolitical quagmire over the MCC may well be taken note by Beijing.

Ahead of Zeya’s visit, senior officials at the Ministry of Foreign Affairs had communicated to the US side not to raise the Tibetan refugee issue during official meetings with senior Nepali officials including the prime minister and foreign minister, according to at least three government officials the Post spoke to.

“The message was delivered from the top political level to the US side through the US ambassador to Nepal, Randy Berry, in view of geopolitical sensitivity,” said an official who spoke on the condition of anonymity citing the sensitivity of the matter.

Fanindra Mani Pokharel, spokesperson for the Home Ministry, said that he had heard about the meeting between Zeya and Tibetan refugee leaders but officially not much communication was made by the security agency because it was Saturday, a public holiday.

Nepal’s government agencies are divided over whether to issue refugee cards to the Tibetans given the problems they are facing in the lack of documentation.

A senior Home Ministry official said that the government should provide refugee cards to the needy Tibetans and their children on humanitarian grounds.

The US and some Western countries have been pressing Nepal to provide the refugee identity card to the Tibetans in Nepal.

Nepal stopped issuing such cards to the Tibetan refugees in 1995.

The Ministry of Foreign Affairs, however, has a different take on the issue.

Since Nepal follows the one-China policy and is committed to not allowing its soil to be used against China, Kathmandu’s position on Tibetan refugees has not changed over time, said officials.

Spokesperson Lamsal’s statement on Friday stemmed from that very position when she said the government was not aware of any possible meetings between the visiting US delegation and Tibetan refugees as she expressed hope that the visit will be held “within the framework of Nepal’s foreign policy”.

“[But] we are not aware of her private meetings and engagements,” said Lamsal. “We do not know about any programmes other than official meetings. During her official meeting with the prime minister and other ministers, the issue of our commitment to human rights and democracy will be discussed and our commitment to it is very much understandable.”

“Nepal is committed to human rights and democracy. Prime Minister Sher Bahadur Deuba has already made a commitment to attending the second of the Summits for Democracy being organised by US President Joe Biden,” she said.

Deuba attended the first of the Summits for Democracy in December last year.

“Our position is clear. Overall, the visit of the US Under Secretary of State would be concluded within the framework of Nepal’s foreign policy. We don’t know about the meeting with Tibetan refugees. But we will look into the matter if there was such a programme in her schedule,” said Lamsal.

Zeya will be meeting with Prime Minister Deuba, Foreign Minister Narayan Khadka and Home Minister Bal Krishna Khand on Sunday before wrapping up her Nepal visit that day.

Zeya’s visit is one of the highest-level delegations from the US in recent times and it also is part of a flurry of arrivals from Washington.

Recent visits from the US also coincide with the 75th anniversary of the Nepal-US diplomatic ties.

Indra Aryal, former chairman of Nepal Human Rights Organisation, said that the issue of documentation of Tibetan refugees in Nepal has failed to get as much attention as it should have.

“I have been closely following this issue since 2007 but it has never gained momentum,” said Aryal, who defends the rights of the refugees, the issue of the Tibetan refugees and the problems they face.

Aryal believes the issue should be addressed from the political level.

“I do not see any change in the status quo in the situation of the Tibetan refugees in Nepal but this is definitely a pressing and humanitarian issue,” Aryal told the Post.

“But there has been no progress for a long time due to a lack of political will. The issue should be settled politically and urgently.”    (Courtesy: The Kathmandu Post)