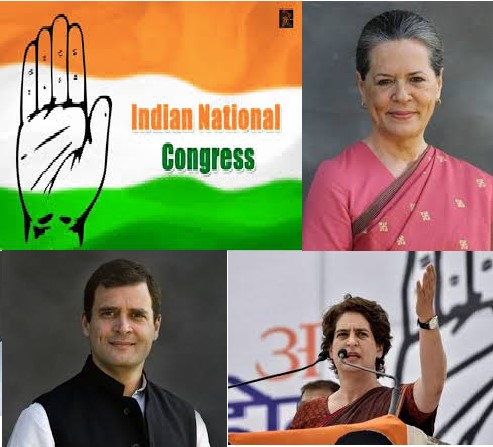 By Hari Jaisingh*
Will India’s grand old Congress party be able to revive itself? This is a million-dollar question that cannot be answered instantly. The Congress, under its interim president Sonia Gandhi – backed up by her children Rahul and Priyanka – is today a mere shadow of its glorious past. Its performance as an opposition party has been ineffective and lackluster.
While Rahul Gandhi occasionally raises some critical questions publicly, he has proved to be ineffective since he does not hold any official position in the party. He gives the appearance of being an escapist. As for Priyanka, her public presence seems half-hearted.
Sonia Gandhi emerged on the national scene after the tragic assassination of Rajiv Gandhi. What is rather baffling is that she could manage to remain as a full-fledged Congress President for 19 years. This perhaps is partly a result of the Congress’s old culture of sycophancy.
It must be said to the credit of the BJP-led NDA Prime Minister Narendra Modi that he has been able to successfully outsmart and maneuver Congress big wigs flaunting the Nehru-Gandhi stamp, by his rhetorical promises. The controversial politician from Gujarat prospered politically in Delhi’s Raj Darbar. Prime Minister Modi’s charismatic personality and his electoral gains have shattered the Congress. Of course, he has so far failed to achieve his dream concept of Congress-mukt Bharat.
I see this as PM Modi’s misplaced ambition and a lack of understanding of India’s ground realities. India cannot solely be viewed through the business prism of Gujarat. The face of India virtually changes after a cluster of 33 districts, even though the silken threads of unity run through them.
PM Modi needs to understand India in the right perspective.
In the country’s changing political spectrum, the Congress leadership needs to realize that a culture of sycophancy cannot assume prominence for too long. A genuine flowering of democracy depends on the ability of top leaders to free the mind from the confinements that hold it captive. In this context, I am pleased to note that as many as 23 senior Congress leaders could gather the courage to write a letter to the ‘custodians’ of the party, seeking sweeping changes within, from top to bottom. It is rather surprising that senior Congress leaders openly criticized the handling of party affairs. The timing and the content of the letter is as significant as is the cast of characters. The letter listed the national mood of “fear” and insecurity, as well as the “communal and divisive agenda” of the BJP and Sangh Parivar, economic downturn, increasing unemployment, hardship resulting from the impact of the pandemic and border challenges.
These are solid points for the Congress leadership to challenge the Modi establishment. For this, it has to conduct itself as a worthy opposition. This is where the party leadership has failed.
It is well-known that the Congress today is at its weakest. There is widespread perception among the people that the party is adrift.
Ironically, the seven-hour-long stormy meeting of the Congress Working Committee neither discussed the contents of the letter nor gave any specific commitments on the way forward to the wide-ranging changes that 23 senior leaders have called for.
Interestingly, despite assurances of no ill-will against the 23 dissenting leaders, Sonia Gandhi has targeted dissenters while announcing important organizational changes. Her strategy is obviously to dilute the powers of dissenters – Ghulam Nabi Azad and Anand Sharma – both of whom are signatories to the letter that questioned the style of functioning of the Congress leadership.
In this regard, it must be said that voices of dissent are the essence of our democracy. In fact, the very momentum of democracy depends on the free play of ideas and functional freedom at all levels.
Looking back, even the rise of Indira Gandhi could, in a way, be attributed to her fighting spirit against established clique in the then Congress. Regrettably, she later deviated from her liberal path.
Viewed in this perspective, Sonia Gandhi has a good deal to learn from those stormy days of the party. Unfortunately, she lacks the fighting spirit of her mother-in-law. She is a lackluster person who does not possess political will to put the Congress in proper shape while giving due weightage to the voices of dissenters within the party.
More than anything else, Sonia has failed to provide a new orientation to the Congress to play an effective role as an opposition party in the country’s political complexities of today. Rahul Gandhi, as party president, too has failed at the onerous task of rebuilding the party as an effective instrument of opposition power.
Rahul has conducted himself as a larger-than-life leader who tends to voice his opinion on various issues without proper homework. He gives the impression of lacking crucial elements of courage and stamina to take up the challenges as a leader of substance. A strong and viable opposition party is a necessity for the proper democratic functioning in the country. That responsibility largely lies with Rahul, but alas, he has failed to rise to the occasion. Nothing can be more tragic than this harsh fact.
As for Priyanka, despite her basic abilities, she has never been sure of her role in the party. It is no secret that Sonia Gandhi’s heir-apparent has always been her son Rahul. The quality of Indian democracy cannot be upgraded as long as double standards, hypocrisy and doublespeak rule the leadership’s thinking and action. George Eliot has beautifully conveyed this idea in the following lines: ‘Our deeds still travel with us afar, And what we have been, makes us what we are.’
Finally, the key to the future of the Congress is an elected chief who should have the ability to provide the right answers to the country’s manifold problems with the help of common sense and understanding of grassroots realities.
(* The writer is a veteran journalist and formerly editor -in-chief of The Tribune)