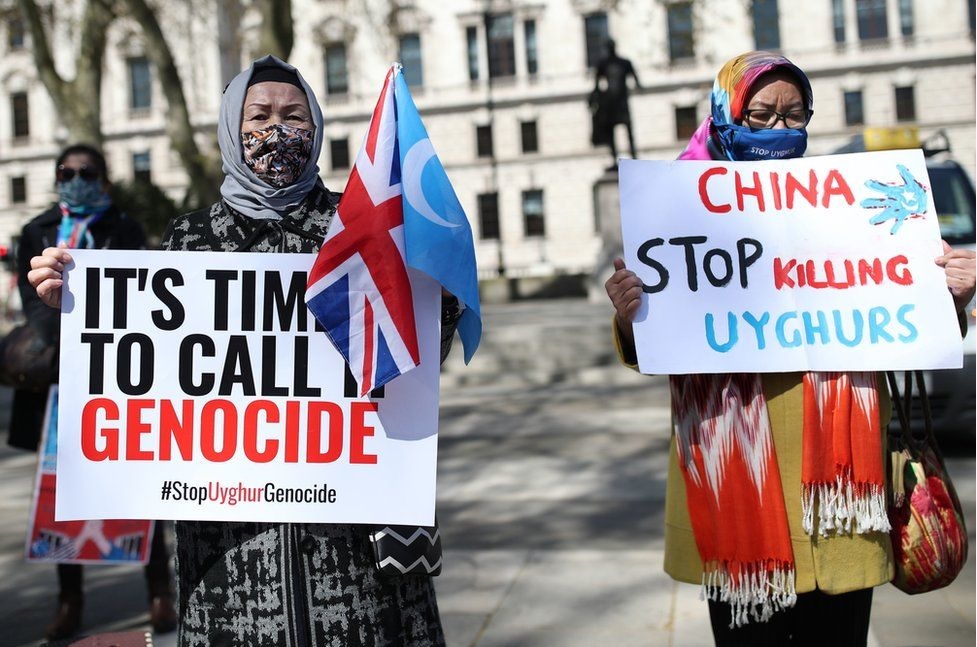 A new study says the Xinjiang Production and Construction Corps, a paramilitary group in Xinjiang, has played a “key and central role” in the authorities’ grave abuses against Muslim minorities such as Uighurs.

The Helena Kennedy Center for International Justice at Sheffield Hallam University in the United Kingdom released Tuesday (July 26) titled “Until Nothing is Left”: China’s Settler Corporation and its Human Rights The Violations in the Uyghur Region report discusses how the Xinjiang Production and Construction Corps has suppressed the lives, culture, and identities of members of minority groups, including Uighurs, through forced relocation, forced labor, land requisition, extrajudicial detention and imprisonment, and religious persecution.

“The Corps has implemented these programs over the past five years to create a reign of terror,” the report reads.

Founded in 1954, the Xinjiang Production and Construction Corps is now an organization that “integrates the party, government, military, and enterprises,” distributed throughout Xinjiang, with the authority to handle economic, governmental, and judicial affairs on its own; administratively under the dual leadership of the Chinese central government and the Xinjiang Autonomous Region government; it is a provincial (ministerial) unit with leading positions such as “commander” and “political commissar” with military-like establishments.

In terms of economy, the Corps, also known as China New Construction Group Corporation, is a large state-owned enterprise, mainly engaged in agriculture and industry, but also involved in transportation, construction, commerce and other economic construction businesses. The Corps owns more than a dozen listed companies and holds equity stakes in thousands of companies.

In 2020, the U.S. government has included the Xinjiang Production and Construction Corps on the sanctions list for serious violations of the human rights of ethnic minorities in Xinjiang.

The Helena Kennedy Center for International Justice report said the corps was a “colonial body” that was “dispatched by the top of the party-state to serve as a military and industrial force to suppress Uighur dissent.”

The report, for example, says the Xinjiang Production and Construction Corps has its own prison system, but satellite imagery shows that since 2016, the Corps has begun to hold Uighurs in these prisons and has built new prisons to accommodate more detainees, so much so that “in the past few years, it has become increasingly difficult to distinguish between the Corps’ prisons and their internment camps.”

The internees of Uighur laborers constitute the corps’ main labor force, and some of the internment camps are even in industrial parks subsidized by the corps, such as satellite imagery showing that in the Yong’anba Industrial Park in Tumshuk, where the corps’s third division is located, there is a facility surrounded by a reinforced wall and guard towers at four corners, the report said.

Officials in the Xinjiang Production and Construction Corps also “encouraged” Uighurs living in villages to transfer ownership of land, then work in factories and move to uniform, monitored communities provided by the government, the report said. These coercive government-backed land acquisition projects have destroyed the lifestyles and cultures of locals such as Uighurs, forcing them into so-called “surplus labor, which is directly beneficial to government-owned, subsidized or approved businesses,” the report said.

According to the report, all enterprises and investment projects in the Xinjiang region are also expected to participate in the crackdown projects of the government authorities.

The report points out that because the enterprises of the Xinjiang Production and Construction Corps have been integrated with the enterprise, trade and financing environment in Xinjiang, China and the entire region, few industries can be completely unrelated to the corps, which has led to the defilement of international supply chains, resulting in other governments, multinational companies and consumers becoming accomplices in the persecution of Uighurs.

VOA sent a comment email to the author of the report, but had not received a response by the time of writing.

On June 21, the United States officially implemented the Uyghur Forced Labor Prevention Act, which completely banned Xinjiang products from entering the United States unless the importer can prove that the product does not contain forced labor.

The report at Sheffield Hallam University on Tuesday called on other governments to also impose import bans on forced labor products and wanted governments to disclose customs data and a list of companies affiliated with the Xinjiang Production and Construction Corps.

The report lists warehousing and logistics companies that source cotton from Corps enterprises and is intended to provide a reference for enterprises downstream in the supply chain.

In addition to recommending that all companies cut ties with the Xinjiang Production and Construction Corps, the report calls on the development bank to end all dealings with corps entities.###